The field of otolaryngology may be experiencing a paradigm shift towards the use of endoscopes to perform middle ear surgery. The wide-angle view and high-resolution image quality provided by rigid endoscopes allows for vastly improved visual access to outer and middle ear pathology using minimally invasive surgical portals (Figure 1). Conventional binocular microscopy is a well-established and safe modality to visualise the middle ear, but often relies on a post-auricular incision and bone removal to access complex disease. Until very recently, the endoscope has been used primarily to examine the middle ear following microscopic ear surgery (“otoendoscopy”). 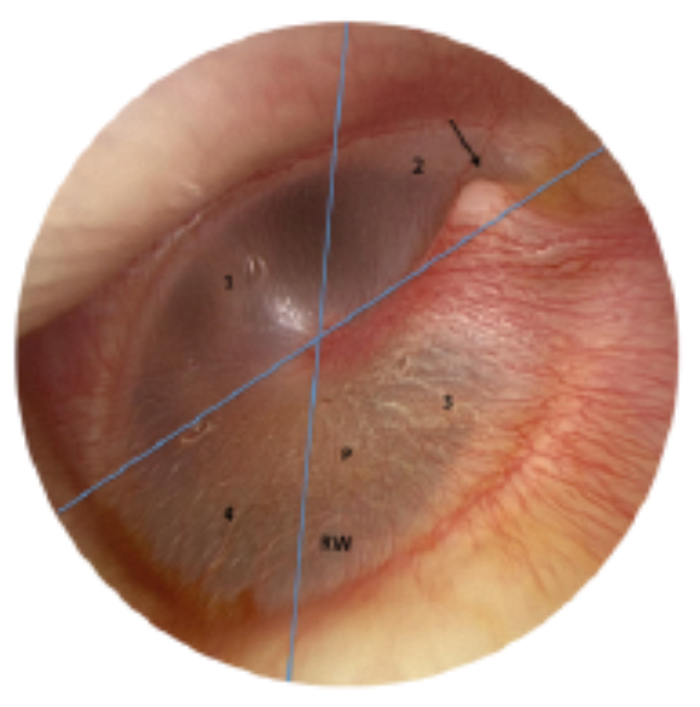 Figure 1A. Tympanic membrane (TM) surface anatomy, left ear, 0° endoscope. The four TM quadrants are clearly visualised: 1-anterior-inferior, 2-anterior-superior, 3-posterior-superior, and 4- posterior-inferior. The promontory of the cochlear (P) and round window niche (RW) are seen through the translucent posterior TM. Arrow – lateral process of the malleus. The blue lines intersect at the umbo of the malleus.

Over the past three years, there has been a rapid increase in the use of the endoscope to perform ear surgery (endoscopic ear surgery or EES). Early adopters of EES over the past decade have faced criticism that parallels the experiences of endoscopic sinus surgeons in the 1980s. Current barriers to widespread adoption of EES include: 1) no robust retrospective or prospective data demonstrating that EES outcomes are comparable or superior to the microscope, 2) only a handful of otolaryngology programmes worldwide that offer live exposure or hands-on courses on EES to residents, fellows and surgeons in practice, 3) limited access to high-definition endoscopic imaging technology at some centres, 4) decreased availability and selection of instrumentation for EES, and 5) most senior otolaryngologists practising today had minimal or no exposure to endoscopic sinus surgery during training, limiting familiarity with equipment and endoscopic techniques.

Although retrospective studies have reported a low prevalence of complications associated with EES [1], a careful review of the pitfalls associated with any new surgical technique is crucial to improve patient outcomes. The following review on safety considerations in EES will focus on 1) heat transfer to the middle ear, 2) ototoxic effects of anti-fog solution, 3) operating room or layout and team communication and 4) the use of an “endoscopic holder”.

Essential equipment for EES includes a light source and rigid endoscope coupled to a 3 chip high-definition (HD) camera and video monitor. The rigid endoscope diameters commonly used for ear surgery are 2.7mm, 3mm and 4mm. As the diameter expands, image quality improves and the visual field widens as more light is transmitted to the operative field. However, larger endoscopes decrease the working space available for additional instruments and increase the transfer of radiant energy to surrounding tissues. Typical endoscope shaft lengths in middle ear surgery are 11cm, 14cm, and 18cm. In addition to the association of endoscope size on light transmission to the middle ear, the choice of light source will also affect thermal gradients during surgery. There are three types of light sources used during endoscopic surgery: halogen, xenon and light-emitting diode (LED). 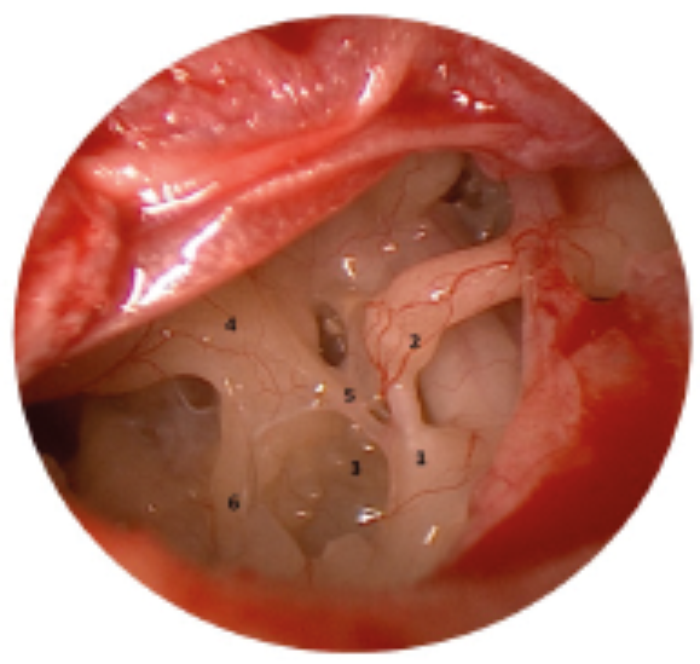 Several studies have documented elevated temperatures in the middle ear due to heat transmission from fibreoptic light source to endoscope tip [2,3]. Our research group at the Massachusetts Eye and Ear Infirmary (MEEI) investigated the magnitude of rigid endoscopic heat transfer in a cadaveric endoscopic ear surgery model [3]. Fresh human temporal bones were maintained at body temperature (36°C) and a temperature probe was placed at the round window. Temperature changes were measured as a function of 1) distance between the tip of a 3mm 0° Hopkins rod and round window membrane, 2) intensity of light source, and 3) type of light source. Infrared imaging was performed to assess radiant exposure to surrounding tissues (thermal gradient). We found that an endoscope maximally powered (100%) by a xenon or LED light source resulted in a rapid temperature elevation up to 46°C within 0.5 to 1mm from the tip of the endoscope within the middle ear, and elevated temperatures occurred up to 8mm from the endoscope tip (Figure 2). We also demonstrated that the temperature decreased rapidly within 20 to 88 seconds of turning off the light source or applying suction (Figure 3). 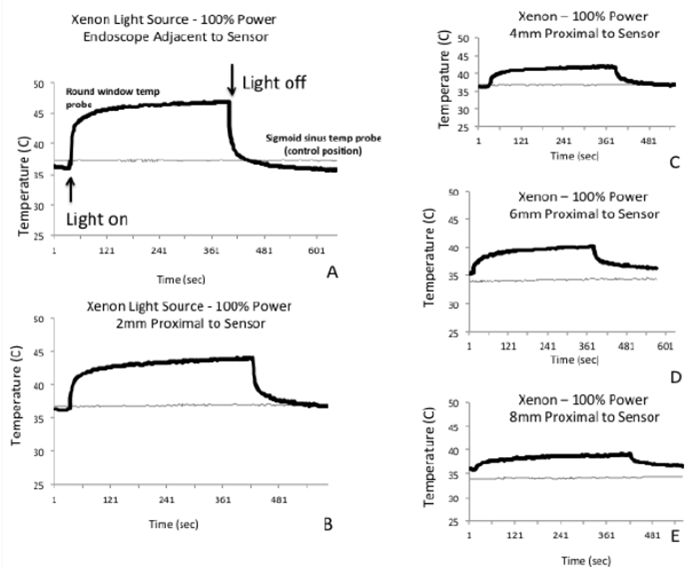 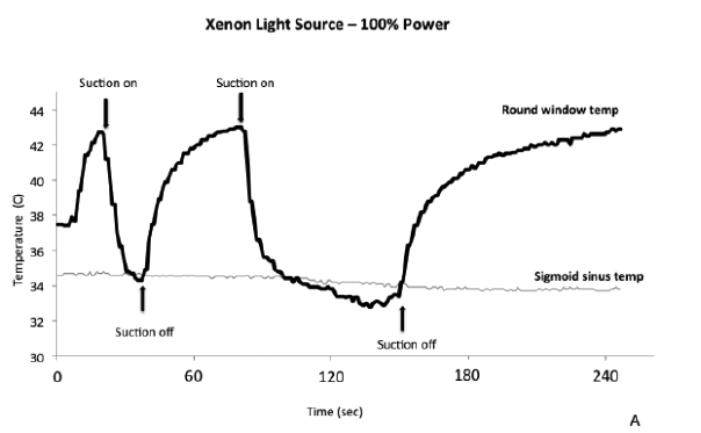 Figure 3. Suction results in robust cooling of the middle ear space. In a human temporal bone heated to body temperature, Xenon light sources were turned, and the expected rapid rise in temperature was demonstrated. Suction was positioned next to the endoscope tip, which resulted in rapid temperature decreases to below baseline temperature. Modified from Kozin et al. [3].

Finally, we found that a LED light source had lower maximal temperatures compared to Xenon by ~2°C. Based on these findings, we recommend using submaximal light intensity (no more than 50%!), frequent repositioning or removal of the endoscope, or simultaneous use of irrigation and / or suction to allow tissue cooling.

In a complementary study, Aksoy et al. investigated hearing in a guinea pig model following exposure to an endoscope [4]. In the study, 25 male guinea pigs were exposed to heat from halogen or Xenon light sources for varying periods of time. Standard audiometric testing, including distortion product otoacoustic emissions (DPOEs) and auditory brainstem responses (ABR) were conducted on all animals at the beginning of the study, at the end of surgery, and two hours after surgery.

“Taking a hands-on training course will facilitate the safe adoption of new techniques for the novice endoscopic ear surgeon.”

The animal cohort that was exposed to Xenon light source for the most amount of time (45 minutes with 15 second breaks every five minutes) experienced hearing threshold shifts by DPOE and ABR. Thermocouple thermometer readings showed that, after the first minute, the Xenon light source generated significantly more temperature rise than a halogen light source. The surface temperatures of all endoscopes returned to normal approximately one minute after light sources were turned off. Additionally, investigators found a slightly decreased temperature difference when using a 3mm compared to a 4mm diameter endoscope.

Taken together, studies by Kozin et al. and Aksoy et al. demonstrate that similar to an otologic drill or operative microscope, endoscopes transfer heat to the ear. This fact is already well understood by sinus surgeons who avoid putting endoscope tips on drapes as they are a potential fire hazard. All studies demonstrate that using the light source at sub-maximal settings (as specified by the manufacturer) and frequent cooling techniques, e.g. removal of endoscope, suctioning, irrigation, will keep the patient safe.

After auditory brainstem responses (ABRs) were measured, topical solutions of 0.2 mL were applied through a small hole made in the tympanic bulla to fill the middle ear. Post-treatment ABRs were obtained 14 days after the treatment. The saline-treated group showed no deterioration in ABR thresholds. The anti-fog solution-treated and gentamicin-treated groups showed increases in ABR thresholds. The authors concluded that anti-fog solution is potentially ototoxic and should be used sparingly. At MEEI, we apply minimal anti-fog solution to the tip of the endoscope which is then wiped with saline before placement near the middle ear (Figure 4). 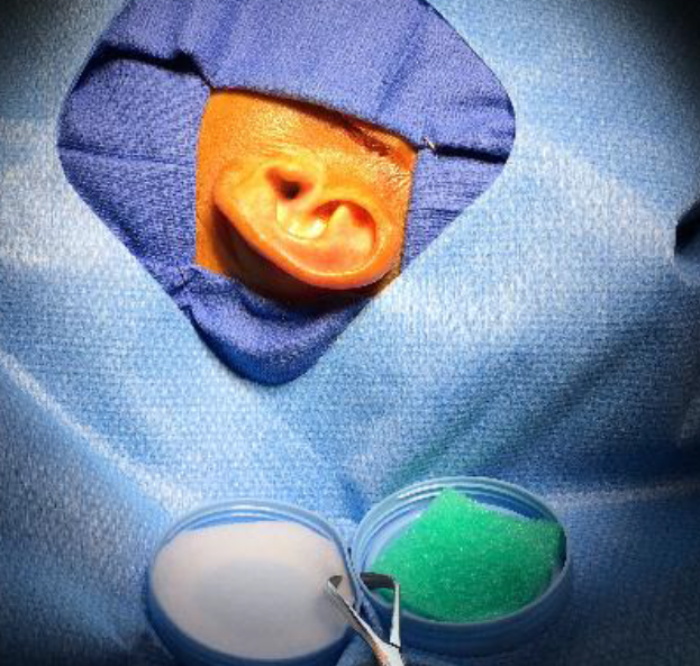 Figure 4. Endoscope wipe and defog holder set-up. A microwipe saturated with saline is better than a moist gauze sponge for streak free wiping of the endoscope lens. Both the microwipe and defog are placed in cup lids to reduce dessication throughout surgery. Note: the microwipe is highly absorbent and will need repeated applications of saline.

Finally, it is crucial to communicate with operating room or staff, including anaesthesiology, neuromonitoring and the surgical nurse / scrub prior to any EES case. In order to maximise patient safety, a traditional otologic microscope should be readily available in the OR in case there is the need to transition to a post-auricular approach.

In addition, it is essential that the patient not move during EES as this may cause inadvertent injury to the external auditory canal or ossicular chain. Similar to most middle ear otologic procedures, facial nerve monitoring is employed during EES. Consequently, a discussion with the anaesthesiologist about minimising movement without paralysis is essential. At MEEI we use a standard room set-up for EES that enables rapid communication with anaesthesiology and OR team, as well as proper surgical ergonomics (Figure 5). 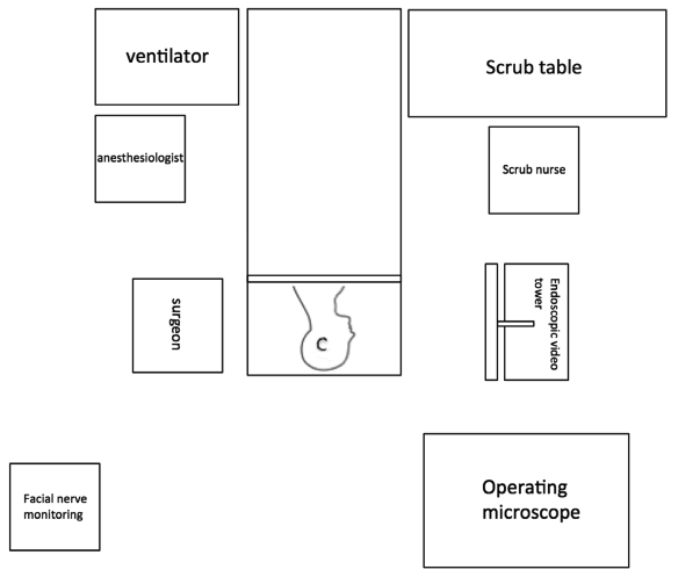 Figure 5. Endoscopic ear surgery room set-up. The surgeon should be directly across from the endoscopic video tower (or boom-mounted video screen), which should be placed close to eye level to avoid neck strain. The scrub table can be placed at the foot of the bed to accommodate the video system.

Is there a role for an endoscope holder?

One of the challenges in learning endoscopic ear surgery is the reliance on one-handed techniques, an approach foreign to two-handed microscopic ear surgeons. Several centres have begun to investigate the use of an endoscope holder. At MEEI, we have trialled the Point Setter Pneumatic Endoscope Holder (Mitaka, USA). The merits include the ability for the surgeon to perform two-handed dissection. This can be beneficial during specific portions of a case that require suction and fine dissection, such as raising a tympanomeatal flap. Endoscope holders, however, decrease the working space within the ear canal, and may result in significant heat transfer from a static endoscope tip.

If the patient moves during surgery, a fixed endoscope could lead to canal or ossicular chain injury. In addition, many external auditory canals are not large enough to accommodate three instruments comfortably (suction, dissector and endoscope). We would NOT recommend the endoscope holder for middle ear surgery. The endoscope holder may be more important during lateral skull base surgery where two-handed dissection is needed for an extended period of time [6]. We recommend against using an endoscope holder for those first starting EES unless the head is fixed in a Mayfield neurosurgical head holder.

EES is a safe operative approach with few reported significant complications. Similar to any new surgical technology, taking a course given by experts, such as those by members of the International Working Group on Endoscopic Ear Surgery (IWGEES), will relate crucial technical pearls to keeping patients (and surgeons) safe. A graduated and step-wise introduction of EES to the practice of otologic surgery is recommended to ensure safe and successful implementation.

Daniel J Lee, MD graduated with a BA in Biology from Columbia University, and received his medical degree at Johns Hopkins School of Medicine. Dr Lee subsequently completed his residency in otolaryngology – head and neck surgery, as well as fellowship training in otology / neurotology at Johns Hopkins University. Dr Lee is currently a full-time faculty member in the Department of Otolaryngology at Massachusetts Eye and Ear Infirmary (MEEI) and Associate Professor in the Department of Otolaryngology at Harvard Medical School. 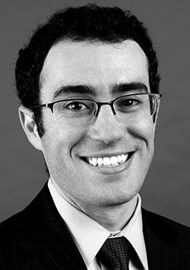 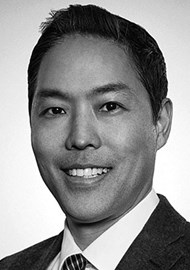