The story of the development of endoscopic sinus surgery is inextricably linked with the names of Stammberger, Messerklinger and Storz. Karl Storz’s daughter, Sybill Storz, tells us more.

We would like to take this opportunity to express our appreciation of Professor Stammberger as an outstanding physician and partner. The cooperation between my father, Dr med h c Karl Storz, and me with Prof Stammberger goes back decades and came about through the contact we had with his teacher, Prof Walter Messerklinger.

My father had met Prof Messerklinger at one of the first ENT congresses in the post-war years. At that time, Prof Messerklinger was interested in a binocular loupe from our product range. However, this product was an exhibition piece and a prototype that was originally not intended for sale. Thanks to Prof Messerklinger’s perseverance, he received the coveted item as a gift from my father at the end of the congress. This was to mark the beginning of a long-standing cooperation with the Ear, Nose and Throat University Clinic in Graz (Austria). 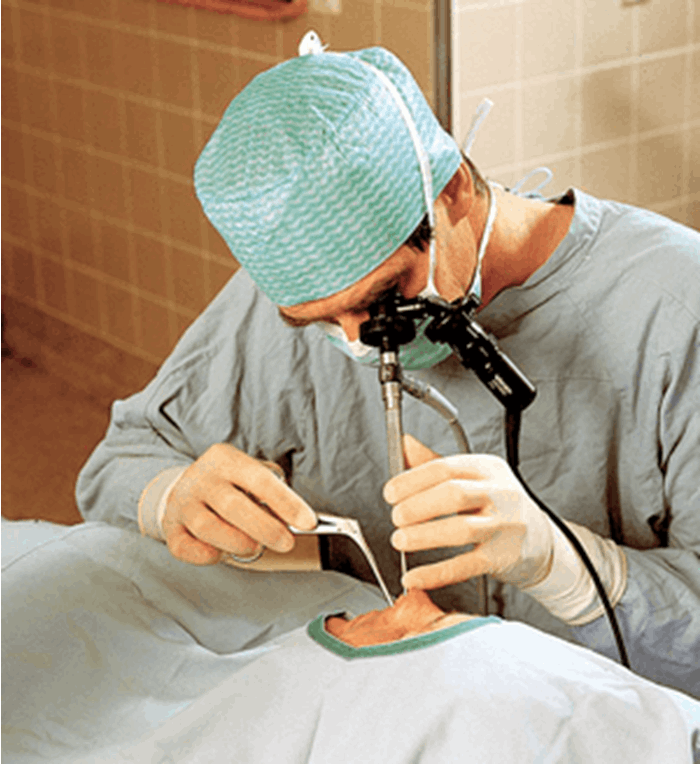 At another meeting at a congress in the 1960s, my father exhibited a short, rigid 4mm endoscope with a 30° direction of view. This product was also a prototype as endoscopy for the purposes of otorhinolaryngology was still in its infancy. My father presented Prof Messerklinger with the endoscope and requested that he test and examine the instrument for potential use.

Later in 2012, Prof Stammberger described this idea of using a rigid endoscope for examining the paranasal sinuses as an ‘endoscopic revolution’ that resulted in a shift of perspective and paradigms. This innovative perspective led to new medical insights and a completely new type of treatment. Radical surgery of the paranasal sinuses or maxillary sinus fenestration in the inferior nasal meatus, according to Prof Stammberger, disappeared ‘practically overnight’.

“Radical surgery of the paranasal sinuses or maxillary sinus fenestration in the inferior nasal meatus, according to Prof Stammberger, disappeared ‘practically overnight’”

In the mid and late 1970s, we supported the beginnings of functional endoscopic sinus surgery with innovative product developments that were based on Prof Messerklinger’s ideas. In the 1980s, Prof Stammberger studied this technique with utmost diligence and further refined it with great expertise. We considered Prof Stammberger not only to be a straightforward and precise surgeon but also one who possessed the farsightedness and the technical know-how to develop new products with us as a partner. Numerous products are based on his ideas – the 45° telescope and the bipolar forceps deserve special mention. These products have made a massive impact on the further development and refinement of the FESS technique. Furthermore, the emerging video technology of the 1980s supported the breakthrough of the method considerably. Prof Stammberger, amongst others, made significant contributions to the development of the beamsplitter which supports the transmission of endoscopic images to the monitor and allows simultaneous observation by, for example, assistant physicians. 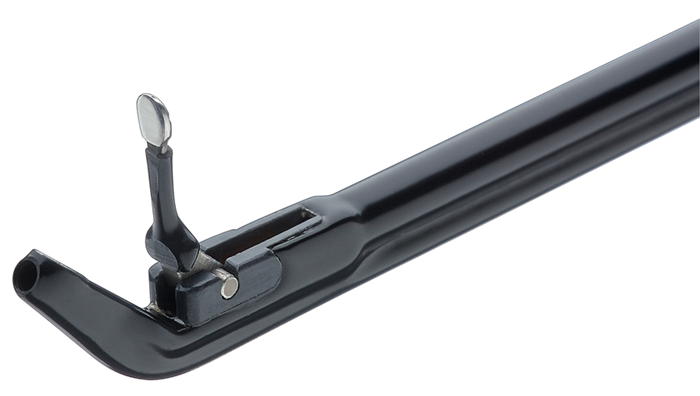 Until shortly before his death, Prof Stammberger was working on the further development of instruments for his surgical discipline in close cooperation with KARL STORZ. In recent years, he was particularly interested in navigation systems in the field of paranasal and skull base surgery. He played an essential role in the development of the navigated endoscope, which makes it possible to preoperatively plan and intraoperatively control an optimal access route, while his ideas helped to optimise the product for launching on the market. In 2012, Prof Stammberger summed up his enthusiasm for medical and technological progress since the mid-1970s as follows: “Developments continue unabated: Not only has endoscopic transnasal surgery long become an interdisciplinary domain, but intracranial interventions are performed by both neurosurgeons and ENT physicians with unbelievable precision while the technological aspect continues to excel with ever more fascinating developments: intraoperative image-supported navigation, CT-MRI fusion, white matter mapping, to name but a few.”

With all the advances in technology, it was particularly important to him that physicians receive extensive training in order to be able to use technology as precisely and safely as possible for the best possible patient outcome. He shared his knowledge not only with us as a manufacturer in the field of medical technology but also with young physicians throughout the world. 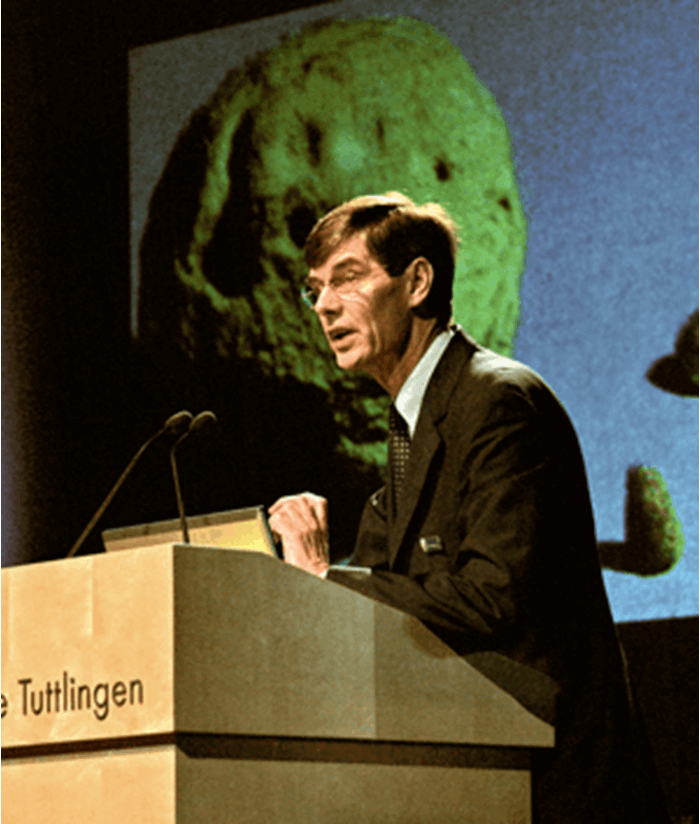 Prof Stammberger presenting his speech on ‘From Counting Sheep to Cuneiform’ at the 60th anniversary of KARL STORZ Endoskope, Tuttlingen, Germany.

We were happy to support Prof Stammberger preparing appropriate training materials, such as instructional films or doctor-to-doctor manuals. Dozens of publications were thus compiled in order to familiarise past, present and future generations of ENT physicians with the FESS technique. It was of great concern to Prof Stammberger that training material was distributed to physicians free of charge. It was also important to him that physicians from less affluent regions of the world had access to this material as expensive textbooks were not readily available to them. The transmission of knowledge was his passion. He established the FESS courses in Graz with an international focus – a recipe for success that still bears fruit. In 2019, the FESS course will take place for the 55th time.

In the international arena in particular, Prof Stammberger was tirelessly committed to imparting his knowledge. We had the honor of providing equipment and support for his courses worldwide. Thanks to his extraordinary dedication, he succeeded in establishing the FESS technique as an internationally renowned school of thought.

Prof Stammberger’s expert knowledge of many other subjects in addition to medicine, e.g. cultural history, came to our attention in 2005 when he was one of the keynote speakers at the celebration of our 60th anniversary. He gave a talk on the history of writing and dedicated this speech to my father, Karl Storz. The following quotation from his speech clearly shows that he never took himself too seriously and always wished to explore matters in depth and breadth: “You can’t really look at the present and at the future without understanding where we originate from.” In his talk, he illustrated how the system of writing has changed in the course of human history. His conclusion: we are only able to document, teach and perform so precisely in medicine and technology today due to a development that has lasted for thousands of years.

“Thanks to his extraordinary dedication, he succeeded in establishing the FESS technique as an internationally renowned school of thought”

We are grateful to have had the opportunity to work with Prof Stammberger for so many decades. We learned a lot from him and were thus able to continuously refine our portfolio. We will always remember Prof Stammberger as a courteous and visionary physician and as a charismatic yet modest teacher. 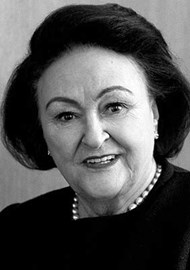