Computed tomography (CT) imaging is crucial in the planning of any endoscopic sinus operation; we hear from one of the pioneers of CT scanning who worked with Stammberger and Messerklinger in developing many of the technologies that we now take for granted.

Since the early 1980s, radiographic imaging of the sinuses has undergone rapid and significant changes [1]. In the following paragraphs, my aim is to provide a historical summary of the chronologic changes and how they were implemented. Professor Heinz Stammberger MD, was an influential contributor in all these changes.

In 1983, the Johns Hopkins department of radiology was a test site for Siemens CT equipment. I was charged with creating the head and neck imaging subdivision within neuroradiology. At the time, our scanners were capable of performing 4mm-thick sections and very limited multiplanar reconstructions (given the reconstruction limitations with 4mm-thick sections). I was invited by Prof Nager, Chief of ENT at Hopkins, to present at the department’s spring meeting in 1984, a meeting attended by Dr David Kennedy, MD. 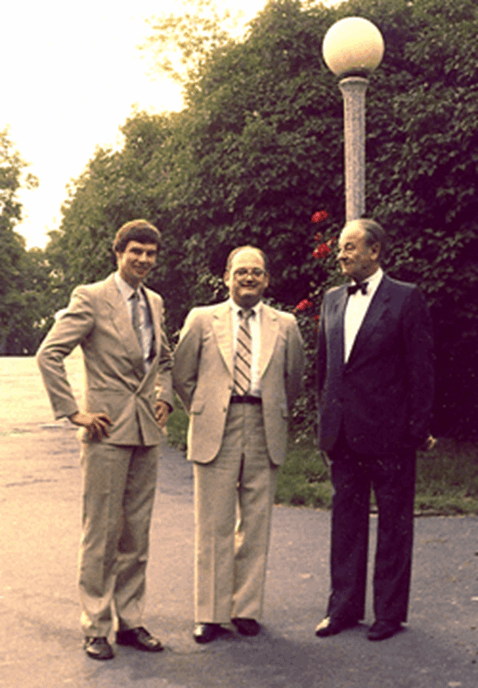 Dr Kennedy met with Prof Messerklinger and Heinz Stammberger in Dubrovnik in 1984 and was impressed with the display of the mucocilliary clearance, as well as their proposed new endoscopically-guided approach to sinus surgery. Dr Kennedy wanted to introduce the new concepts in the US, and so, he approached me to help implement x-ray polytomography for the evaluation of the sinuses, as this was the imaging technique used in Graz to plan and guide the endoscopic-guided sinus surgery (ESS). I promptly informed Dr Kennedy that the polytomographic unit was discarded two months prior to that, as it was our belief that its capability could be replaced with CT. Thus started my education of the sinus anatomy on CT images. It was concluded, at that time, that coronal CT images were the orientation display of choice to show the sinus anatomy, and help guide surgical planning and the surgery [1-4].

In 1985, Dr Stammberger visited Hopkins and I was able to share the images we were then using. He was impressed with the new capability, and enthusiastically took my education on anatomy, as well as the additional needed information for surgical guidance, to a new level. His immediate wish was to implement the new imaging in Graz, and to have me present at the first German-speaking ESS course in July 1986. It was at this course that Dr Messerklinger first saw CT imaging used to display the sinus anatomy. His acceptance of the CT capability replaced the use of polytomography in Graz, and CT was proclaimed as the imaging method of choice with which to evaluate the sinuses in the US and Europe.

In the early 1980s, CT scanners were not as prevalent in Europe as they were in the US. Dr Stammberger recognised this situation and expended the effort to create several publications that would highlight the parameters needed to improve plain-film and polytomographic imaging so as to display the regional morphology and correlate this information with CT images.

CT multiplanar reconstruction and 3D CT imaging of the sinuses

Following the first endoscopic sinus surgery (ESS) course in Graz in 1986, a series of presentations followed for the next three decades, in which various combinations of the ‘team of three’ (Stammberger, Kennedy, and I) presented, worldwide, the basis of the concept behind ESS and the imaging required to plan and guide the surgery. The term ESS was then modified by Dr Kennedy to include the word ‘functional’, and thus, ESS became functional endoscopic sinus surgery (FESS). During these meetings, as well as in between-meeting conversations, much time was spent ‘adjusting’ our message.

Both Dr Kennedy and Dr Stammberger influenced my selection of the CT images needed to meet the surgical requirements. Most memorable for me was the time spent at one of the earlier AAO meetings in San Antonio, where Dr Stammberger and I spent countless hours establishing the course of the basal lamella of the middle turbinate, a concept well-displayed in his drawings of the structure. This concept, as well as others, is demonstrated with standard orthogonal, multiplanar reconstructions and with the 3D surface rendered images ‘scattered’ throughout his famous text book. Dr Stammberger used his excellent educational skills to optimal advantage when he illustrated his message with concrete and detailed imaging, thereby informing the reader of the essence of sinus surgery, and the information needed for its optimal performance [2-4]. 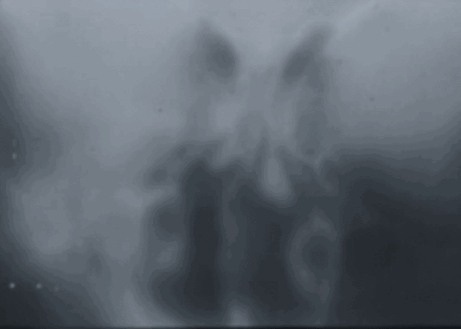 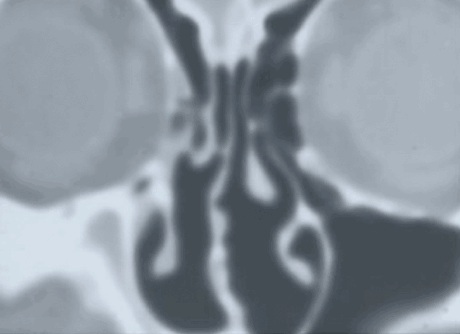 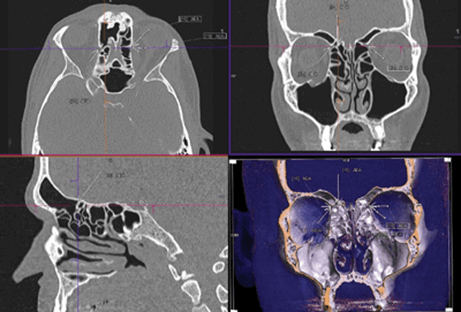 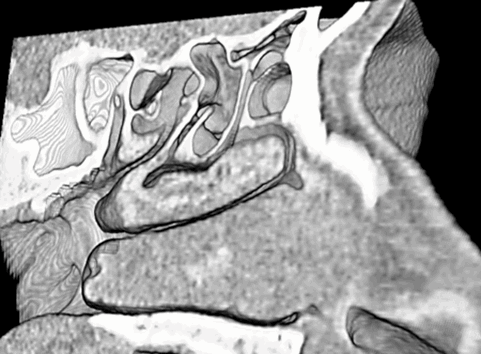 Concurrently with the introduction of FESS techniques and supporting CT imaging, we pioneered the introduction and guided the development of 3D technology at Hopkins, first working with CEMAX Inc, and later, with ISG Technologies, Inc, a company that later was known as Cedara Inc. Early on, it became apparent that, for 3D CT application to be successful, it needed to be directly used by surgeons in the planning and execution of their surgical procedures. Thus, image-guided surgery (IGS) was born. IGS was first developed in Aachen, Germany by a group led by Schlondorff, Mosges, and Klimek in the mid-1980s.

Their equipment, large as it was, stood by the operating table and was based on a mechanical sensor. We at Hopkins worked with ISG Technologies to develop a mechanical arm that was attached to the operating table, precluding the need for extra space around the OR table, and we were the first to introduce it in the USA for neurosurgical applications in 1991 [5,6]. The pointer sensor was 4mm in diameter and somewhat rigid, precluding its use for FESS applications. Both Dr Kennedy and Dr Stammberger advised that we invent a different sensor device. In 1992, we were the first to introduce the optical sensor IGS system, which was first used at Hopkins in a FESS procedure by Dr Don Leopold.

Dr Stammberger became very interested in the technology and advised Storz Inc to look at the technology and consider its introduction into the company’s instrumentation. He actively used IGS in his dissection demonstrations, lectured on the proper usage of the technology, and pointed out its risks. He played a great role in advising Karl Storz on the implementation of ‘active tracking’ of the surgical approach by using the CT data to establish a ‘path’, which could be followed by the surgeon during the surgery.

At the Endo Chicago 2016 meeting, Dr Stammberger and I discussed the need to establish imaging landmarks based on the lamellar principles that were the subject of his lectures. The discussion continued in Stockholm at the ERS meeting, and then later, at the AAO-HNS meeting, that same year. By the time we met in San Diego, I was able to show him preliminary 3D CT stereoscopic images we were creating at Hopkins. He was amazed, as he looked at the 3D stereographic images that provided information which, for the first time, resembled the actual anatomy. As we studied the images, he was convinced that the new technology would provide a new look and an improved understanding of the individually complex sinus anatomy.

For two years, we continued to re-study the anatomy, with the help and contributions of Meiyappan Solaiyappan, Dr Bill Bolger, and Dr Masaru Ishii, who completed our team. Our work and discussions focused on a plan that we would follow to publish this information. Unfortunately, on December 9, 2018, Dr Stammberger was taken from us all. He was ‘the wind behind the sails’ of our team. His fund of knowledge, expertise, and keen observational capability provided the foundation for the work we are about to start disseminating. 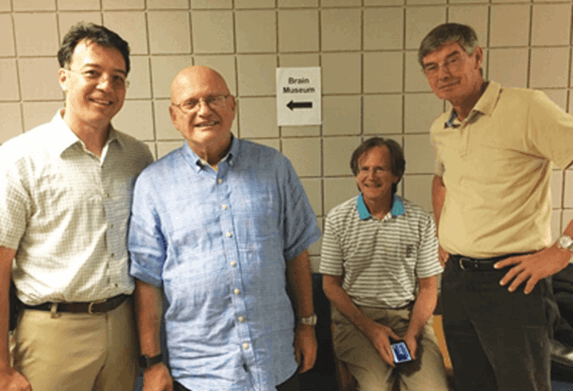 On a personal note: the lessons learned

What I can say from personal experience is that Heinz was an astute student, eager to learn, eager to improve his skills, always seeking to achieve perfection, and an astute visionary. Because of his outstanding capability, and his joy in sharing his experience, he became a world-renowned educator, creating dedicated followers worldwide. I have known Heinz since 1984, as well as his devoted wife, Doloris, who was always steadfast in her support of Heinz and who welcomed his friends as if they were family. I cherish the influence he had on my life. Of the many lessons learned from him, some of the most important were: be kind; make friends; whatever projects you wish to engage in, know that you cannot do it alone and that good partners will enhance your work, and that the addition of good partners not only improves the work, but also enhances and makes the atmosphere more enjoyable. My dear friend (‘Brotherman’), you are very much missed, but, as you are imprinted in my mind and heart, you, will never be forgotten. 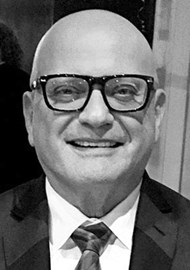