In a world of patient-reported outcomes and patient-centred care, patient-centred research must also be considered. That is where the James Lind Alliance (JLA) comes in, as Caroline Whiting explains below. Through Priority Setting Partnerships (PSPs), it allows patients, their carers and the professionals who treat them to have a say in what research is most important to them. Their ENT portfolio includes balance, tinnitus and hearing loss. More can be read about this in the article ‘Conspiring together: tinnitus and hearing loss’, which discusses a report commissioned on the back of the tinnitus PSP undertaken by the JLA.

It has long been recognised that the questions that are important to patients often are not the questions being answered by health researchers. A paper published in the Lancet in 2000 by Tallon et al. described a study that compared research priorities from patients with osteoarthritis of the knee with research actually being done, and found that most research concentrated on drug treatments while patients were interested in a wide range of other interventions including knee replacement, education and advice [1].

Another report published this year concludes that little has changed in this respect, with a continuing mismatch between topics that are being researched and the priorities of patients [2].

Where funding for research is limited, it is important to reduce waste by ensuring that researchers address the right questions – those that are important to patients and clinicians who face practical decisions about health issues every day, in areas where evidence may be lacking.

The James Lind Alliance (JLA) helps to address this issue by bringing patients, carers and health professionals together in Priority Setting Partnerships (PSPs). PSPs use an established, transparent method to identify and prioritise the uncertainties or ‘unanswered questions’ in a particular area of healthcare, including the views of patient and clinician stakeholders who have not traditionally had a say in what research should be done. The JLA method is designed to highlight research questions which are of direct relevance and potential benefit to patients and the clinicians who treat them, with the aim of leading to changes in the way research funding is granted.

The JLA is a non-profit making initiative established in 2004 by Iain Chalmers, John Scadding and Nick Partridge, and is now hosted by the National Institute for Health Research. Since its initial ground-breaking PSP in asthma, it has gone from strength to strength, facilitating PSPs in areas as diverse as acne, childhood disability, multiple sclerosis, and hair loss, and in ENT specifically has addressed aspects of balance, tinnitus and, most recently, mild to moderate hearing loss.

The PSP in tinnitus was coordinated by the British Tinnitus Association and the NIHR Nottingham Hearing Biomedical Research Unit (BRU). It completed in 2012 and is published in Open Access [3].

So what’s the process?

PSPs are organised by a steering group that represents a balance of viewpoints of patients and carers and the clinicians involved in a particular health area. The basic idea is that the PSP surveys patients, carers and those who treat and support them, to ask for the unanswered questions or “uncertainties” that they think are important for researchers to answer. The uncertainties submitted to a PSP can be numerous. For mild to moderate hearing loss, 461 people submitted 1,147 questions. For the PSP in tinnitus, 835 people submitted 2,483 questions.

The questions gathered by the PSP are verified as uncertainties by checking existing evidence, and are then voted on by patients, carers and health professionals to put them in order of priority. The final step in the prioritisation process is a face-to-face workshop, which allows for discussion and consensus building, so that agreement on the top 10 most important questions for research to answer can be reached. It’s a tried and tested process that results in a balanced inclusion of patient, carer and clinician interests and perspectives. The results of the process – the ‘Top 10s’ – are then disseminated by the PSPs so the important unanswered questions can be taken up by the research community (see Table 1 for an example). 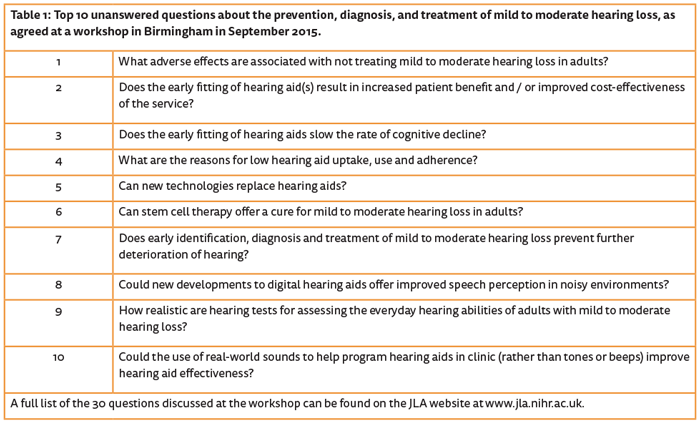 Deborah Hall, Director of the NIHR Nottingham Hearing BRU, said of the top 10 unanswered questions about the prevention, diagnosis and treatment of mild to moderate hearing loss, “I’m delighted with the research uncertainties that have been highlighted as they represent a clear focus for future research to benefit people with mild to moderate hearing loss as well as really capturing the questions that are important for patients and clinicians alike.”

“The JLA is a non-profit making initiative established in 2004 by Iain Chalmers, John Scadding and Nick Partridge, and is now hosted by the National Institute for Health Research.”

The James Lind Alliance (JLA) is named after a pioneer of clinical trials. As an 18th century naval surgeon, James Lind was faced with a variety of proposed remedies for treating scurvy amongst sailors and decided to confront the uncertainty about which treatment was best by comparing them in a clinical trial. He allocated two sailors, taking care that their condition was as similar as possible, to each of six different treatments for a period of 14 days, and showed that oranges and lemons were dramatically better than the other supposed treatments.

Where can I find out more?

Details of all of the health areas where PSPs have been working, and all of the ‘Top 10s’, can be found on the JLA’s website at www.jla.nihr.ac.uk. The website also hosts a detailed guidebook which outlines the JLA process in full. You can contact the JLA on jla@southampton.ac.uk 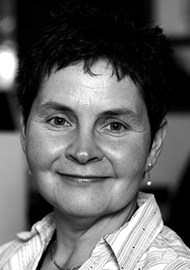