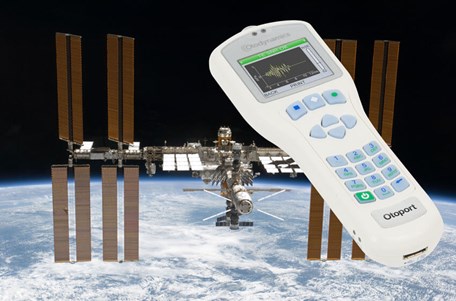 For the last few years, the International Space Station has been home to an Otodynamics’ Otoport Advance handheld clinical OAE instrument. Astronauts used it to record each other’s otoacoustic emissions as they worked in zero gravity. This wasn’t because of concern about their hearing. The ISS is reasonably quiet. The project was to record minute emission changes that might indicate a rise in internal head pressure from the redistribution of body fluids in zero gravity. NASA was very anxious to discover if raised intracranial pressure could be the cause of the optic nerve damage seen in some astronauts on extended missions - damage that could be a serious problem on missions to Mars. The project, now completed, collected data from 13 astronauts. The Otoport Advance worked flawlessly in space. Its OAE recordings supported the emerging conclusion that intracranial pressure remains largely 'terrestrial' in zero gravity - leaving the optic nerve damage still unexplained.

Professor David Kemp of the UCL Ear Institute and founder of Otodynamics explained, “The Otoport Advance was selected because it met NASA’s rigorous requirements required for transportation and deployment on the ISS. I needed to write special software to extract intracranial pressure change information and the data processing was performed offline here in the UK. Intracranial pressure impinges on the cochlea and increases stiffen membranes and shift OAE phase. TEOAEs were used because they are so stable. Tiny differences between pre-flight ground-based and spaceflight TEOAE waveform recordings can indicate increases in head fluid pressure such as occur naturally when we lie down on earth.” The research was in collaboration with Drs Richard Danielson and Douglas Ebert of the Johnson Space Center and was funded by NASA. For further information see Prof Kemp’s teaching poster, downloadable from OAEs.com.