Professor Bill Gibson is one of the great pioneers of inner ear surgery and the recent publication of his biography is a reflection of his remarkable life and career. Bill Gibson: Pioneering Bionic Ear Surgeon will be enjoyed by everyone with a love of medicine, science and personal achievement.

This book is more than one man’s journey from rural Devon to the glittering foreshores of Sydney. It also chronicles the development of cochlear implants and how Prof Gibson used the device to transform the lives of thousands of profoundly deaf adults and children. His life’s work has also increased our understanding of the investigation and management of that most enigmatic of diseases: Menière’s.

Tina Allen sympathetically describes how admiration for his father’s role as a medical officer during World War II and the general practice he ran from the family home, led to Prof Gibson knowing by the age of five that he wanted to be a doctor. He was soon building crystal radios from scratch and the determined way he focused on each task would be a hallmark of his career. By the 1960s, he had been awarded a full scholarship to the Middlesex Hospital Medical School.

Life-long friendships with John Graham and Jonathan Hazell developed during Prof Gibson’s medical training – a time, “when minds are wide open and you really can be fired up by enthusiastic teachers”. These great teachers included William Lund, Sir Douglas Ranger and the co-editors at that time of Scott-Brown’s: John Groves and John Ballantyne.

Prof Gibson was drawn to otology by new microsurgical procedures, such as the stapedectomy and tympanoplasty. It is sobering to discover that ENT surgeons were the first to use the operating microscope. He progressed up the career ladder quickly and was an FRCS by the age of 27. Time to reflect included an MD with Ellis Douek at Guy’s Hospital and a ‘mini-gap year’ of several months’ duration at the Georges Portmann Institute in Bordeaux, which led to a life-long interest in finding a cure for Menière’s disease.

The importance of a loving marriage and the support of family is revisited throughout the book. There was tragedy too with the loss of a daughter just over the age of two. Whilst grieving, he made use of quiet time to write a seminal book on Clinical Electric Response Audiometry. He was helped throughout this difficult period by two other great otological names of our age: Richard Ramsden and David Moffat. Together they became known as ‘The London Triumvirate’ after publishing 11 clinical papers in 12 months.

In 1977, Prof Gibson was appointed a consultant at Queen’s Square in London where he met the “strange Australian with no money”, Michael Halmagyi, who is now a revered oto-neurologist. Other inspirational colleagues included Alan Crockard, Sir Roger Bannister and Margaret Dix. At this time, John Graham and Graham Fraser (whose widow Patricia later launched the Graham Fraser Fellowship in Sydney) were working on a single channel cochlear implant at University College Hospital while Prof Gibson had joined Andrew Morrison’s research group, ‘Project Ear’.

After some initial trepidation, Prof Gibson left Queen’s Square in 1983 to take up the inaugural Chair of Otolaryngology at the University of Sydney. He then established a cochlear implant programme in New South Wales using the ‘bionic ear’, pioneered by Professor Graeme Clark and his team in Melbourne.

In August 1984, Prof Gibson operated on two young women who were among the first people in the world to receive the bionic ear. Three years later, he operated on a four-year-old girl who was the youngest recipient of the bionic ear. The book describes his bravery in performing surgery on increasingly younger children as well as his emotional and ethical conflicts with the Deaf community. A legacy of his career is the development of the small, straight incision, which dramatically decreased the rate of wound breakdown after cochlear implant surgery.

His work with Menière’s disease is also remarkable; championing ECochG testing and endolymphatic sac surgery. He has passed on these skills through various training programmes. About a dozen British otologists, including myself, have participated in the Graham Fraser Fellowship (GFF) which supported a Fellow to be mentored by Prof Gibson in Sydney for around six months. A generous, patient and hugely sought after teacher; the benefit of his knowledge is spread around the globe.

Now in his seventies, he continues to see patients three days a week, assist in theatres and give lectures at international conferences. The photographs below were taken at a recent GFF reunion dinner in London, attended by many Fellows and also some individuals mentioned in this review. This inspiring book concludes with the following: “The basic attribute of mankind is to look after each other. The desire to help others still burns brightly in William Peter Rea Gibson.” 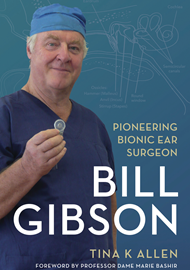