I was excited to receive and review this book. Unfortunately I was disappointed to discover the strange paperback spirally bound exterior, which the publisher’s website states makes it robust. It looks anything but robust and, as an intended textbook to dip into prior to individual cases, I cannot believe the exterior will last long. It would be ideal for it to stay in the operating theatre so all members of the team and students could read it; hence why it could do with being hardy.

This textbook should be seen as a bookshelf addition, and not a replacement, to a general TORS textbook such as that by Weinstein and O’Malley. It contains a reasonable amount of anatomical information and it is, as the foreword by Bert O’Malley Jr states, from an inside out approach. But the actual anatomy is nothing that cannot be gleaned from anatomy textbooks. The text briefly covers the indications for each TORS approach, but these sections seem to lack substance.

The most disappointing aspect is the videos, which I did access. There are two on lateral oropharyngectomies, two on base of tongue resections and two on supraglottic laryngectomies. Considering the principal aim of the text is to cover the anatomy, very little anatomy is demonstrated in the videos. Instead they are just standard TORS resections. The videos using the Flex Robotic system are of poor quality and certainly appear inferior in optics compared to those of the Da Vinci system.

This textbook is useful as a revision aid but it certainly will not replace the text by Weinstein and O’Malley, which is more thorough. For the experienced TORS surgeon, there are interesting chapters including retropharyngeal node dissection and nasopharyngeal access. The former is a brief description, which does mainly cover the anatomy. The pictures are from cadavers and so it is difficult for the reader to appreciate how pathological node dissection would appear in real life.

The textbook could benefit from a chapter on salvage surgery. Whilst the anatomy is still the same, a real appreciation of the tonsilloglossal sulcus and extrinsic/intrinsic base of tongue musculature is required by the operating surgeon. 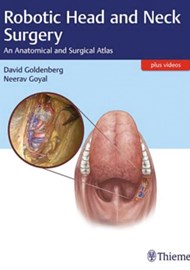