As anyone who has tried to learn the anatomy and physiology of the vestibular system can attest, understanding and visualising the structures and their functions can be quite challenging. Thankfully, there is now a free app called aVOR (iOS, iTunes App Store) that is aimed at making the learning process a whole lot easier.

aVOR, created by Hamish MacDougall and Steve Rogers, was developed as an educational tool for improving understanding of vestibular system function, specifically the angular vestibulo-ocular reflex. The app capitalises on components within smartphone devices that are highly sensitive to rotation and movement – the same components that allow you to beat your high score on the famous iPhone game Labyrinth – in order to demonstrate the vestibulo-ocular reflex.

aVOR has a number of features that users can pursue to expand their knowledge. On one screen, labelled models of the semicircular canals provide a useful anatomical overview; as the semicircular canals are rotated in the three Cartesian planes, the appropriate canals light up to show excitation (red) and inhibition (blue). On other screens users can view various animations, including the responses from the different canals to changes in angular velocity.

What makes aVOR stand out as an interactive educational tool is that it allows users to explore the pathophysiology associated with the angular vestibulo-ocular reflex. Users of the app can choose to view saccadic eye movements resulting from various vestibular pathologies (e.g. impaired VOR, canalithiasis). For example, a user might select a dysfunction of the left lateral semicircular canal that is acute in nature. Other variables include cerebellar function and the type of corrective saccade(s).

The aVOR includes a set of tutorial screens for introducing users to finger controls for manipulating the models within the app. Even with the guidance provided by the app, I found that it took a bit of practice and perseverance before I could use the app in a useful way. Now that I have the hang of it, aVOR has become invaluable to me as a helpful tool for visualising the impact of vestibular pathologies on eye movements. 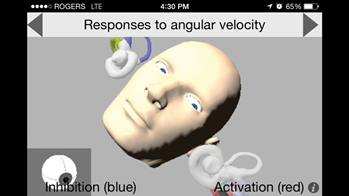 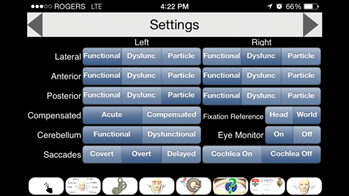