Around a fifth of people in the UK self-report to having hay fever (allergic rhinitis). In the majority of cases, this is thought to be a sensitivity to grass pollen. Symptoms may present as nasal congestion, sneezing, runny nose or red, itchy eyes and can be treated by taking timely medications (antihistamines, nasal saline douching, eye drops) or avoidance of triggers.

Medicines can take some time to take effect, however, and are often taken in reaction to presenting symptoms as opposed to pre-emptively. This article presents a couple of apps that look to change this.

The Airthings app (called Airthings Wave on IOS and Google Play) is an innovation by Airthings, a global tech company providing indoor air quality solutions for consumers and businesses. The app is free to download but requires you to set up an account (which is fairly easy to do). The app itself is primarily designed to link with an Airthings product, e.g. Airthings Wave, which analyses the air quality of the room. However, for the purposes of pollen forecasting, a device is not required. 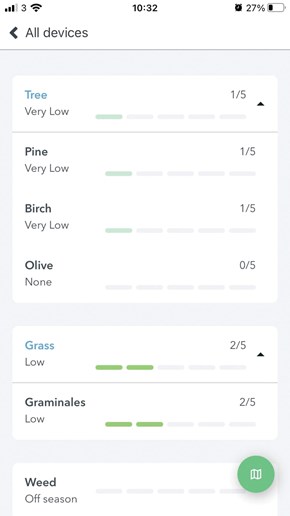 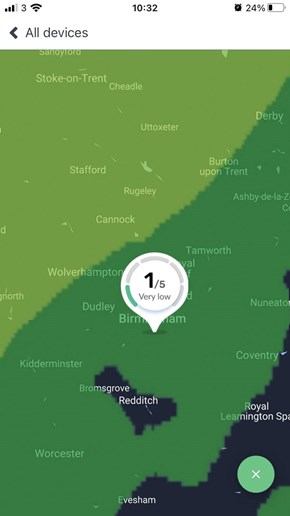 To locate the pollen function of the app, press the three horizontal lines on the top left corner of the screen. This opens a tab which directs you to ‘My pollen levels’. After this, you share your location, and it’s fairly self-explanatory: current pollen levels (graded severity from 1-5) are shown for the various tree and grass types and weeds, which are stated to be the most common pollen types to trigger allergic reactions. Indeed, many or all these allergens are tested in the skin prick allergy tests, and this differentiation may be useful to know if you know what you’re sensitive to.

“The wave mini analyses the air quality of a room and provides ongoing data on humidity, temperature, mould risk and airborne chemicals”

If you want to check the pollen level at a different location - for example, if you’re travelling to an event – you can press the map icon in the bottom right of the screen which opens up an interactive map, and check the pollen levels using the colour grading system (green being low, orange medium and red high).

The power of the Airthings app, however, really comes in using the pollen levels in conjunction with an Airthings device. I had the opportunity to use the Airthings Wave Mini, which is one of the smaller devices that boasts an impressive three-year battery life (3x AA batteries). The wave mini analyses the air quality of a room and provides ongoing data on humidity, temperature, mould risk and airborne chemicals. This information is used to provide an overall indicator of air quality from poor to good, which is reflected as an LED colour on the device, and also as a graph on the app. This information can be joined with the ‘My pollen level’ feature to help the user to decide when to ventilate the room to find the right balance between good air quality and pollen exposure.

“In addition to the Airthings app, the Breezometer app and website forecasts pollen levels for the coming two days”

The Airthings app credits the source of their pollen information as being from Breezometer; a company made up of “scientists, engineers and professionals… [that provide the] world’s most accurate and actionable environmental data and insights”. Indeed, all of the pollen information can be found freely on their website (www.breezometer.com/air-quality-map/) OR their app (available under the name Breezometer on IOS and GooglePlay). In addition to the Airthings app, the Breezometer app and website forecasts pollen levels for the coming two days, as well as data on the general air quality levels in the area. 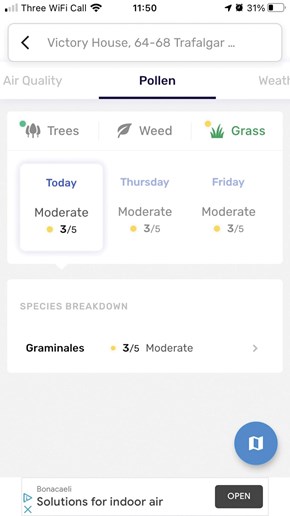 This is the most popular pollen app in the UK IOS appstore. First released in 2018, this free app has an impressive 4.6 stars (over 4k ratings) with many shining reviews. Pollen data is shown live on a map using a colour-coding system similar to the other apps, and a forecast is shown for the next four days. There’s also a pollen ‘diary’ that allows the user to rate their symptoms from ‘no symptoms’ to ‘high symptoms’ on a star system. A pattern is formed over consistent tracking, and presumably the allergy tab will auto populate with the user’s sensitive pollen types according to the prevalent pollen on their high-symptom days. 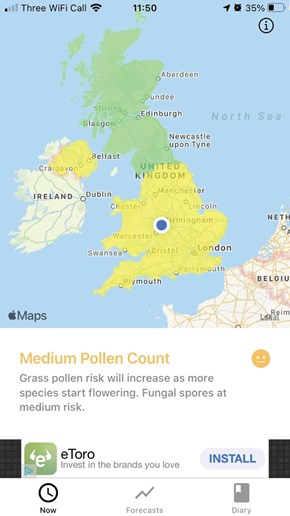 Pollen forecasting apps now exist, enabling hay fever sufferers to go about their day with greater confidence having predicted when to take precautions and pre-emptive medications to keep symptoms at bay. 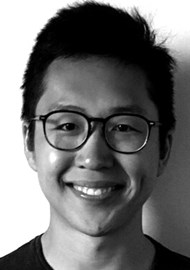