Spasmodic dysphonia is a rare neurological voice disorder, which is often missed by the inexperienced ear. There is no laboratory test or investigation to diagnose this condition therefore, it is best diagnosed by listening to the patient’s voice. Laryngeal endoscopy is necessary to support the diagnosis and to exclude other laryngeal disorders. The current first line treatment is with botulinum toxin A injection. Mr Karagama demonstrates his technique of botulinum toxin injection in the clinic using EMG to locate the laryngeal muscles to be injected. There are also surgical options for the treatment of this voice disorder with promising results.

Spasmodic dysphonia is a voice disorder that causes involuntary contraction of the laryngeal muscles during phonation. It is a neurological condition of unknown cause [1]. The pathophysiology is due to irregular release of acetyl choline at the neuromuscular junction in the intrinsic muscles of the larynx. This is usually regulated centrally at the basal ganglia of the brain. This results in spastic contraction of the affected muscles. The symptoms depend on which group of muscles are affected.

In the larynx, there are two groups of muscles that can be affected: the adductor muscles comprising of the thyroarytenoid and lateral cricoarytenoid; and the abductor group comprising of posterior cricoarytenoid muscle (PCA). The voice will sound strained and strangled if the adductor muscles are affected, whereas the voice will be weak and breathy if the abductors are affected. Rarely, there may be mixed type.

The most common type is the adductor spasmodic dysphonia constituting 90% of cases. The abductor constitutes 5%, and 5% are mixed type.

“Accidental injection into the lateral cricoarytenoid LCA muscle may result in excessive paralysis as the LCA is the strongest adductor muscle.”

The diagnosis is usually made by history taking and clinical examination. The most important part of the clinical examination is done using a fibreoptic video laryngoscopy and stroboscopic examination of the larynx. The purpose is to exclude other physical pathologies of the vocal cords. An MRI scan might be required to exclude other neurological conditions that can affect the voice. It is important to consider a referral to a neurologist and speech therapy if other conditions like motor neurone disease, multiple sclerosis, and muscle tension dysphonia are suspected.

The standard first line treatment is botulinum toxin A injection [2]. There are different manufacturers of the botulinum toxin A but the chemical nature is the same. The commonly used ones are Botox, dysport and Xeomin. 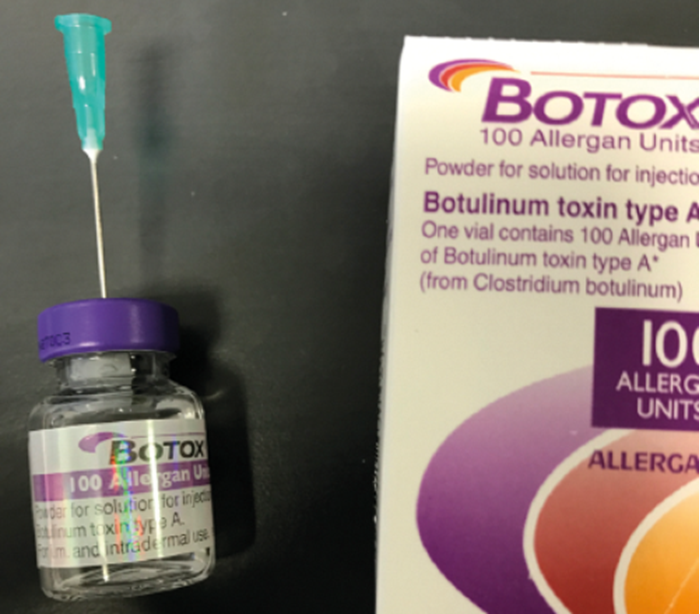 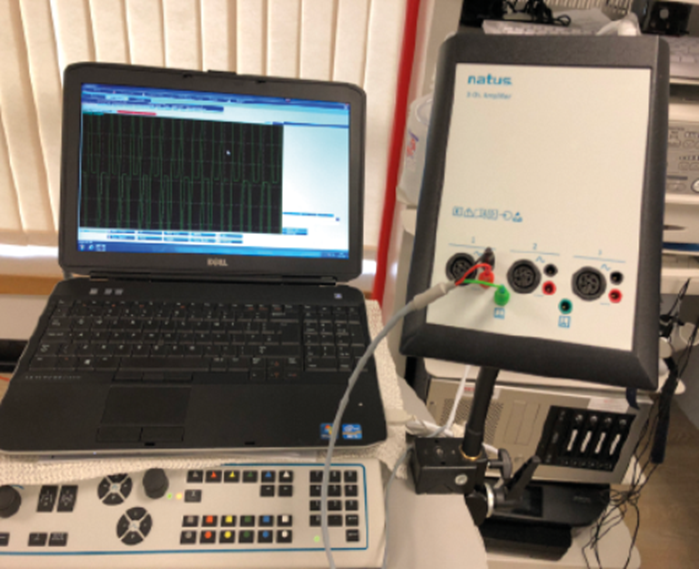 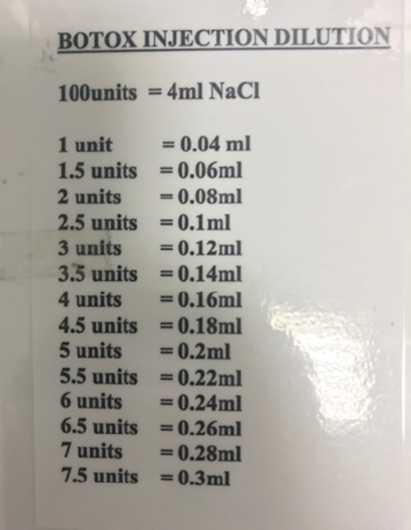 One hundred units of Botox diluted with 4cc of normal saline and 0.06cc is drawn in a 1mm syringe. This is equivalent to 1.5 units of Botox. This is usually the recommended starting dose. Some patients may require a higher or lower dose at a subsequent visit or may even need only a unilateral injection. Xeomin dilution and strength is same as Botox. However, disport is 2.75 x 1 to get the equivalent on 1 unit of Botox.

The target muscle is the thyroarytenoid muscle. This is a weak adductor and it is the most suitable to inject. Accidental injection into the lateral cricoarytenoid LCA muscle may result in excessive paralysis as the LCA is the strongest adductor muscle. This will lead to prolonged breathy voice before the Botox starts wearing off. 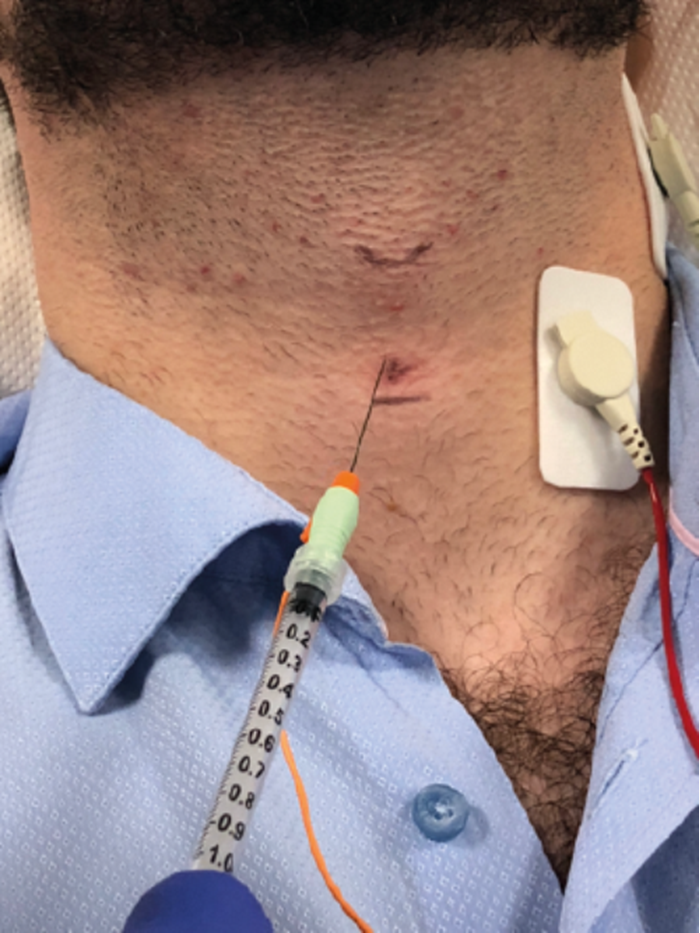 Local anaesthesia is not required. The injection is done with the patient sitting at 60 degrees with neck extended. For some patients, it might be more comfortable lying supine but at 30 degrees head up and neck extended.

“The position of the needle in the thyroarytenoid muscle is confirmed by asking the patient to phonate on letter ‘e’ and the EMG signal interpreted before injecting the botox.”

The cricothyroid notch is identified and Botox 1.5 unit is injected percutaneously into the paraglottic space. The position of the needle in the thyroarytenoid muscle is confirmed by asking the patient to phonate on letter ‘e’ and the EMG signal interpreted before injecting the Botox. It is important not to enter the tracheal lumen with the needle as this will trigger a cough and sometimes bleeding. 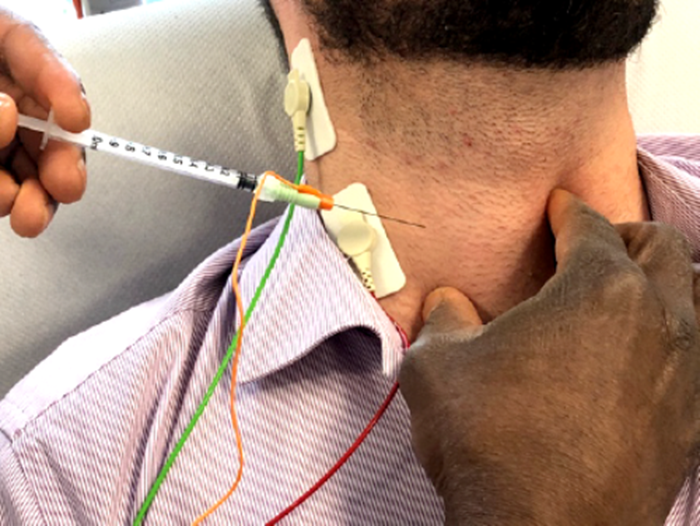 Botox injection into the posterior cricoarytenoid PCA muscle is more technically difficult due to the location of the PCA muscle. There are three methods through which the PCA can be accessed for injection. The injection might be performed via a percutaneous lateral neck approach at the level of the cricoid cartilage with the thyroid cartilage being tilted contralateral. Once the needle is positioned, the patient is asked to sniff to stimulate the PCA muscles and the signal seen on the EMG screen confirming the right muscle before the Botox is injected. The injection might also be performed percutaneously via the cricothyroid notch and piercing the back wall of the cricoid cartilage on right and left paramedian position to reach the PCA on each side of the posterior aspect of the cricoid cartilage where the PCA is situated.

The third approach is done under a general anaesthesia via a suspension microlaryngoscopy. Although this technique has the additional risk of a general anaesthesia, it offers the best accuracy of injection as the posterior wall of the cricoid cartilage and the arytenoid are easily identified.

There are several serotypes of botulinum toxin. Type A is the one commonly used in spasmodic dysphonia and other forms of dystonia. There are potential complications of injecting botulinum toxin A especially if the wrong muscles are injected or from overdose of injection. The most common side-effect after botulinum toxin injection in the larynx is a breathy and weak voice and rarely dysphagia. This effect is temporary and is somewhat expected. In severe cases, patients may aspirate during drinking and eating. Rarely this can lead to aspiration pneumonia.

There are a few surgical options for treating ADSD with varying short and long-term success. Examples are thyroplasty type 2 lateralisation of the anterior commissure of the vocal cord [3], selective denervation and reinnervation [4], endoscopic CO2 laser thyroarytenoid myoneurectomy [5]. The published results are very good in the majority of cases.

Botulinum toxin injection remains the first treatment option in spasmodic dysphonia and is best performed under EMG guide via percutaneous approach. This eliminates the need for a general anaesthesia as in the suspension microlaryngoscopic approach. The percutaneous injection may also be performed with video flexible nasal endoscopic guide. The main disadvantage of botulinum toxin is the fact that it needs to be repeated every three months as the effects wear off.