2014: Are today’s implantable devices better than conventional solutions for patients with conductive or mixed hearing loss?
By Ad Snik

Patients with conductive or mixed hearing loss become candidates for amplification when reconstructive surgery is not viable. Three common amplification options are conventional acoustic devices, such as behind-the-ear devices (BTEs), (implantable) bone-conduction devices and active middle ear implants. The goal of amplification is to make speech audible so that the listener can understand speech while avoiding unpleasant sound levels. This article examines the audiological capacity of these amplification options, in other words, how effective are the different devices in amplifying speech?

A new effective bone-conduction transducer was developed in the mid 1980s. This transducer, part of the bone anchored hearing aid (Baha) bone conductor, was coupled directly to the skull by means of a skin-penetrating implant anchored in the skull bone (Figure 1A). As shown by Hakansson et al. this new percutaneous bone-conduction route is approximately 15 dB more effective than the transcutaneous route [2]. Combining Hakansson et al’s finding with that of Skoda-Türk and Welleschik suggests that the percutaneous route is 35 dB (50-15 dB) less effective than the air-conduction route. In other words, if the Baha is used instead of a BTE device, the first 35 dBs are ineffective (or ‘lost’). However, if the hearing-impaired subject has an air-bone gap of 35 dB, first of all, the BTE has to compensate for that 35 dB air-bone gap in contrast to the Baha device. This suggests that percutaneous bone-conduction devices like Baha are the most effective for patients with an air-bone gap exceeding 35 dB and that BTE devices are most effective if the air-bone gap is below 35 dB. This 35 dB ‘cross-over’ point has been validated in patients by de Wolf et al. [3].

In the case of malformed, atretic ears or chronically diseased middle ears, BTEs cannot or should not be used, so, bone conductors remain. Carlsson and Hakansson studied the amplification and output of the percutaneous Baha device, the most effective type of bone-conductor on the market at the time [4]. They showed that the maximum power output (MPO), or the loudest sound that could be produced before the device saturated, was just below 70 dB HL. This value is the same for current digital Baha devices (the BP100; Cochlear BAS, Göteborg Sweden). Furthermore, Carlsson and Hakansson reported that the noise floor of the Baha was below 0 dB HL and thus inaudible.

The most powerful Baha device currently on the market is the Baha Cordelle (Cochlear BAS) with a body-worn audioprocessor. This device is approximately 10 dB louder than the standard Baha [7] and its MPO is approximately 80 dB HL [6]. A new percutaneous device, the so-called Ponto device (Oticon Medical, Askim, Denmark), was recently introduced onto the market. The MPO of the standard Ponto device is comparable to the MPO of the standard Baha [6]. 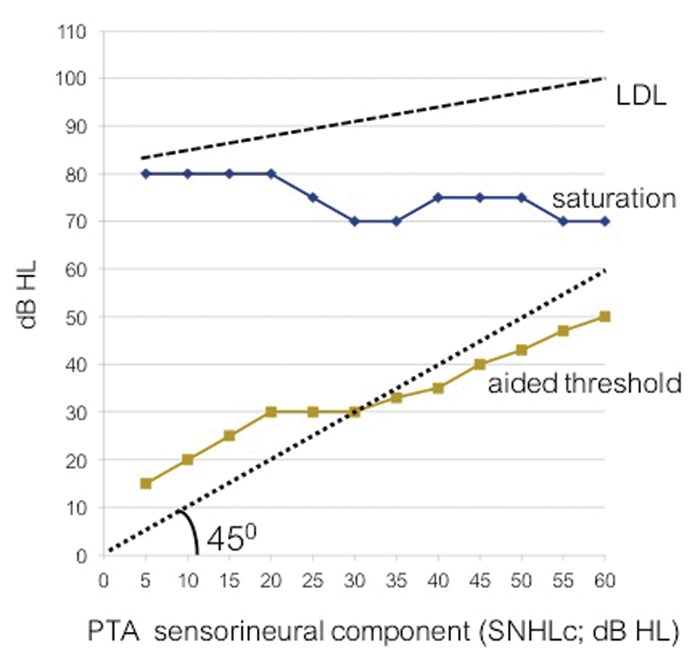 Figure 2: Aided thresholds (average over 0.5, 1 and 2 kHz; line labelled) and the input level at saturation (averaged over the same frequencies; line labeled ‘saturation’) presented as a function of the sensorineural hearing loss component (SNHLc). Data of 89 patients are presented in 12 classes (5 dB broad). The dotted line, labelled LDL, presents the mean loudness discomfort level as published before [9].

The question that remains is how do patients use such bone-conduction devices with their restricted MPO level? To answer this question, we re-examined the data of 89 patients who used varying types of Baha devices (data taken from Snik et al. [8]). Figure 2 presents the aided thresholds as a function of the patient’s bone-conduction thresholds (or their sensorineural hearing loss components; SNHLc). Mean data are presented by averaging over the frequencies 0.5, 1 and 2 kHz. For clarity, individual data were grouped into 12 classes of 5 dB each. Per patient, we then calculated the amplification (functional gain) by subtracting the mean aided threshold from the mean SNHLc. The input level at which the Baha device saturates, at the volume setting as chosen by the patient, is the MPO level of the Baha used, minus the functional gain. These so-called ‘input levels at saturation’ are also presented in Figure 2, as a function of the SNHLc. The figure shows that patients with (sub)normal cochlear function set the volume of their Baha so that the functional gain is negative (thus with a partially remaining air-bone gap). Patients with a more severe SNHLc need positive gain to improve their hearing thresholds which, according to the figure, is found for patients with SNHLc exceeding 30 dB HL. Note that with increasing SNHLc, more and more patients chose more powerful Baha devices such as the Baha Cordelle [8].

Figure 3 shows a similar graph to the previous figure, but also includes data from a study using the transcutaneous Sophono device [5]. The vertical line depicts the mean aided hearing range at the mean SNHLc of the patients in that study (6 dB HL). The plot indicates that the Sophono device has a reduced hearing range compared to the percutaneous Baha.

Knowing that the range of normal conversational speech sounds ranges from 20 dB HL to 50 dB HL [10] (see box in Figure 3), it is obvious that only the percutaneous Baha has aided threshold levels low enough to achieve 100% audibility when the SNHLc is 10 dB or less. At a SNHLc of 60 dB HL, audibility has reduced to zero. As a reference, at a SNHLc of 50 dB HL, audibility is reduced to approximately 25% (see Figure 3). Following Mueller and Killion, the expected word score is approximately 35% and the sentence recognition score in quiet is approximately 70% [10]. 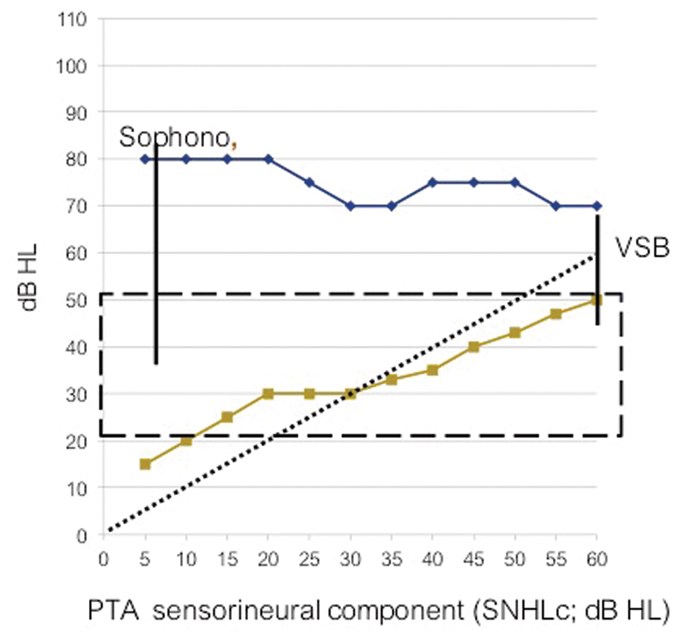 Figure 3: Aided thresholds and the input level at saturation presented as a function of the sensorineural hearing loss component. Vertical lines present data of Sophono device users with conductive hearing loss (at a mean SNHLc of 6 dB HL) and Vibrant Soundbridge users (at a mean SNHLc of 60 dB HL). The ‘box’ between 20 dB HL and 50 dB HL outlines the Minimum and maximum speech levels of normal conversational speech [10].

In addition to Hol et al. [5], Sylvester et al. [11] and Siegert et al. [12] have also reported aided thresholds of Sophono users with conductive hearing loss (mean SNHLc < 10 dB HL) and reported average aided thresholds of 30 dB HL and 27 dB HL, respectively. These values are comparable to those reported by Hol et al. and, according to the figure, are 10 to 15 dB lower than those obtained with Baha devices. The study by Sylvester et al. also included data of a group of patients with mixed hearing loss who used the transcutaneous Sophono device [11]. Mean SNHLc was 26 dB HL and the mean aided threshold was 52 dB HL, thus, outside the speech range. With a Baha device at the same SNHLc, a mean aided threshold of 30 dB HL is seen (Figure 3).

“A patient’s ‘aided hearing range’ is the difference between the aided threshold and the input level at saturation.”

Modern versions of the traditional bone-conduction device kept in place by means of a head band, are the Baha, Ponto or Sophono audioprocessors coupled to an elastic (soft) band worn around the head. Again, aided thresholds from 20 dB HL to 30 dB HL have been reported for patients with conductive hearing loss and these values are, as anticipated, 10 to 15 dB lower than thresholds obtained using percutaneous applications [13, 14].

A third amplification option is the use of a middle ear implant whereby the actuator is directly coupled to one of the cochlear windows. This relatively new approach has been applied successfully in patients with atretic ears and chronically diseased ears after subtotal petrosectomy [15]. In most cases, the Vibrant Soundbridge (Med-El, Innsbruck, Austria) middle ear implant with its actuator coupled directly to the round window or to the remnants of the stapes was used. Zwartenkot et al. measured the MPO of this new application and reported values of 80-85 dB HL, thus comparable to or somewhat higher than that of the Baha Cordelle [6]. Figure 3 displays the mean hearing range (mean aided thresholds and mean input level at saturation as obtained with the Vibrant Soundbridge, programmed linearly) at the mean SNHLc for that study group (60 dB HL) [6].

A bone-conduction device termed the Bonebridge (Med-El) has recently been developed [16, 17]. The Bonebridge device comprises an externally worn audioprocessor (as with any alternative bone conductor), however, the vibrating actuator is not part of the audioprocessor but is implanted in the temporal bone. The audioprocessor and actuator are transcutaneously linked electromagnetically.

In summary, present data show that the MPO of bone conductors restricts speech recognition with these devices, most pronounced in patients using the (passive) transcutaneous devices. Obviously, a patient sets the volume of his / her device such that an input sound level of 70-80 dB HL is just processed well. These values enable accurate perception of even the loudest parts of normal conversational speech, as produced by the patient’s voice. MPO measurements indicate that the Vibrant Soundbridge with its actuator directly coupled to the cochlea is somewhat more powerful than the Baha Cordelle and that the audiological capacity of the Bonebridge appears to be comparable to standard percutaneous devices.

In addition to audiological considerations, other factors such as the stability and safety of the intervention, complexity of the surgery, costs, magnetic resonance imaging (MRI) compatibility and cosmetics play a role when choosing an amplification option. Below, we shortly discuss two of these factors, namely serious complications and MRI compatibility. Comparing the stability and risk of serious complications of the implantable devices is not an easy task as published data are scarce. Recent new developments such as the Sophono device and Bonebridge device have been motivated by an intrinsic weakness of percutaneous bone-conduction devices, viz. the vulnerability of the percutaneous coupling to infection and trauma which then requires medical intervention. In a long-term evaluation of percutaneous implants, Dun et al. reported 162 instances of repeated surgical interventions because of complications over a summed span of almost 5000 years of follow-up [18]. This equates to one repeated surgical procedure per 30 years of follow-up.

Only a few papers have published results on the number of repeated surgeries in patients with conductive or mixed hearing loss who were provided with middle ear devices [15]. The need for MRI scans is a factor that might lead to additional re-surgeries. For percutaneous bone conductors, MRI scans are not a problem and the implant itself affects the MRI image only locally [19]. For middle ear implants however, the electromagnetic actuator might be harmed by the magnetic field and the magnetic components distort the MRI image over a significant proportion of the head [19]. Therefore, the need for an MRI might lead to explantation. This issue is not limited to the Vibrant Soundbridge but it is also relevant to the (relatively new) MET and Codacs implantable devices (Cochlear Ltd., Mechelen, Belgium). It is speculated that one re-surgery in 30 years of follow-up, as reported for percutaneous bone-conduction devices, is a challenge for application of today’s middle ear implants.

Declaration of Competing Interests: AS works as a consultant for Cochlear UK. This paper is based on work performed without support from any company. 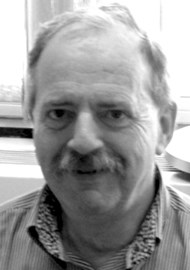