The association of degraded binaural processing in adults with clinically defined ‘slight’ or ‘hidden’ high frequency hearing loss is of great interest to clinicians if it can be measured. Leslie R Bernstein and Constantine Trahiotis share their findings in measurements of binaural detection thresholds in 31 adults using interaurally delayed tonal signals and noise maskers.

This study assessed whether audiometrically-defined ‘slight’ or ‘hidden’ hearing losses might be associated with degradations in binaural processing. Our data suggest that listeners whose high-frequency monaural hearing status would be classified audiometrically as being normal or ‘slight loss’ may exhibit substantial and perceptually meaningful losses of binaural processing.

A burgeoning area of interest within the auditory community is the investigation of ‘hidden hearing loss’. Schatte and McAlpine used the term to refer to abnormal auditory brainstem responses in humans having tinnitus but who had normal audiograms [1]. Their findings were consistent with the outcomes of several anatomical and physiological studies employing animals [2, 3]. The results from several such studies suggest that peripheral auditory neural coding deficits may occur in the absence of measurable losses in absolute hearing sensitivity. Those studies motivated others to investigate the possibility of behavioural deficits in people categorised via standard audiometry as having normal hearing or, at most, ‘slight’ hearing loss. To date, behavioural experiments concerning ‘monaural’ auditory processing (i.e. processing not involving binaural interaction) have failed to reveal unequivocally any deficits in the face of normal or near-normal audiograms.

As discussed in our published report on this topic [4], we hypothesised that behavioural measures of binaural auditory performance could reveal the presence of deficits that may not be discoverable via standard audiometric testing or measures of monaural processing. To explain, consider that neural information arising from pairs of frequency-matched, monaural, left and right cochlear regions serve as the inputs to central binaural processing. Next, consider that binaural processing relies upon an effective multiplication of stimulus-synchronised, yet monaural inputs. Because of such multiplication, small deficits in neural encoding essentially randomly distributed across the monaural channels would be expected to be magnified at the output of the binaural processor. We reasoned that appropriate behavioural measures of binaural detection could reveal those larger deficits.

Across many contexts, interaural (across-ear) temporal differences (ITDs) provide important cues for binaural processing. Modern conceptions and quantitative modelling of how listeners localise, lateralise, and detect sounds binaurally rely on the idea that external ITDs of sounds are compensated internally. The compensation is conceptualised as being accomplished by an internal interaural delay network that is often depicted as a neurally-based cross-correlogram having x, y and z axes of ITD, frequency and amount of neural activity, respectively.

Recently, we developed a paradigm allowing us to measure the precision with which ITD is coded along that putative internal interaural delay-line network. Our approach centred on the measurement of binaural detection in the classic NoSπ stimulus configuration in which a noise masker is presented identically (diotically) to the two ears (No) and a tonal signal is presented 180° out of phase across the ears (Sπ). The addition of the Sπ signal to the masker produces interaural differences that serve as the basis for detection. The novel twist was to measure NoSπ detection thresholds after the application of an ITD to the entire signal-plus-masker waveform. This stimulus configuration is referred to as (NoSπ)τ. Importantly, if the listener could compensate perfectly for the ITD imposed, then detection thresholds would not change as the magnitude of the ITD is increased. This is so because perfect ITD-compensation would, effectively, remove the interaural delay (τ), thus transforming (NoSπ)τ back to NoSπ. Conversely, if precision of ITD-compensation declines with the magnitude of the ITD imposed, then thresholds of detection would increase with ITD. Such an outcome would be considered to be a manifestation of progressively increasing ‘processing noise’ along the internal delay line. Increases in processing noise would reduce the listener’s ‘internal’ signal-to-masker ratio and require increases in signal level to maintain performance.

Thirty-one listeners, aged 21 to 67, participated. Their audiometric thresholds between 250 Hz and 8 kHz, measured in octave steps, were ≤ 25 dB HL. Thus, all listeners had, at most, ‘slight’ hearing loss, as defined clinically.

(NoSπ)τ detection thresholds were measured as a function of ITD (τ) via a two-alternative forced-choice adaptive task. For stimuli centred at 500 Hz, tonal signals were masked by 900-Hz-wide Gaussian noises. For stimuli centred at 4 kHz, 125-Hz tonal signals were added to narrowband maskers (50- or 100-Hz wide) before being transposed to 4 kHz [4]. Stimuli were presented at a level of 67 dB SPL. 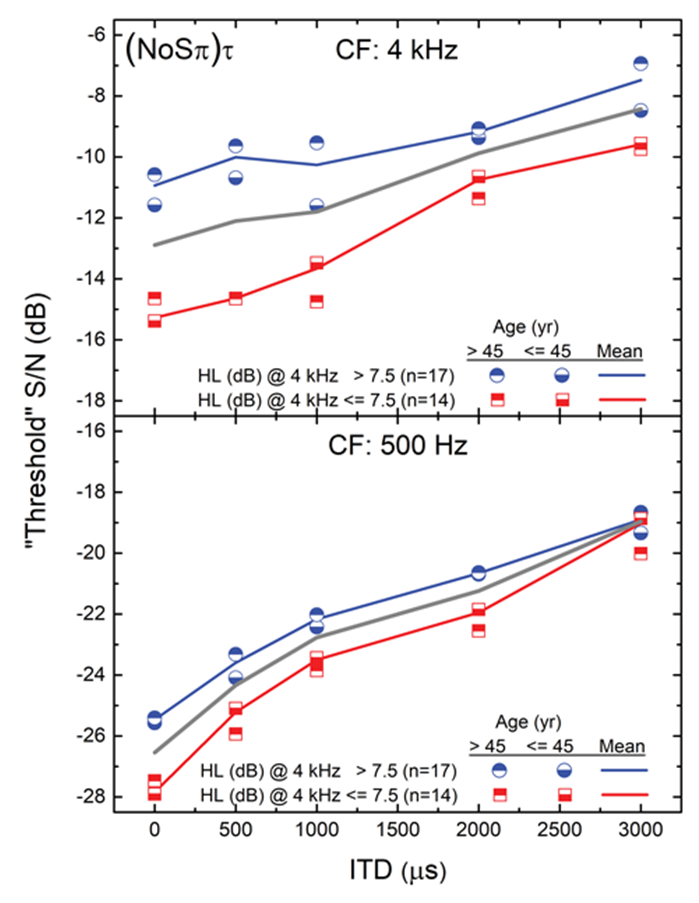 The general patterning of the data shows that detection thresholds increase with the magnitude of the ITD, suggesting that compensation of ITD is progressively less precise as ITD increases. The blue and red lines indicate that, for all values of ITD tested, listeners having values of HL exceeding 7.5 dB at 4 kHz required larger values of S/N in order to detect the signal than listeners having values of HL at 4kHz that were ≤ 7.5 dB. That outcome is striking and is consistent with our hypothesis that even slight elevations in monaural absolute thresholds can result in substantial reductions in binaural sensitivity. It is crucial to note that data obtained in monaural masking control conditions (not shown here) revealed no differences for the two groups of listeners. The blue and red half-filled symbols reveal that binaural detection thresholds for listeners having absolute thresholds at 4 kHz >7.5 dB HL fall above the grand mean regardless of age while absolute thresholds for listeners having hearing thresholds ≤ 7.5 dB HL fall below the grand mean regardless of age. Partitioning of the data in these manners demonstrates that the measured elevations in binaural detection thresholds are more attributable to hearing level than to age.

It was hypothesised that audiometrically-defined ‘slight’ or ‘hidden’ hearing losses might be associated with degradations in binaural processing. Binaural detection thresholds were measured with interaurally delayed tonal signals and noise maskers. Thirty-one listeners, all classified audiometrically as having no greater than ‘slight’ hearing loss were tested. The results showed that:

All of the foregoing suggests that a sensitive binaural test may reveal substantial and perceptually meaningful deficits in listeners whose high-frequency monaural hearing status would be classified audiometrically as being normal or ‘slight’ loss. 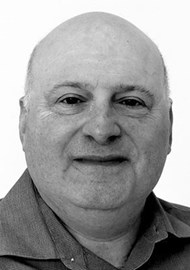 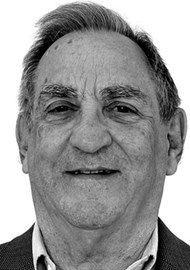