The auditory brainstem implant (ABI) has been developed from cochlear implant (CI) technology and is indicated for people who have anatomical abnormalities of the cochlea or dysfunction of the auditory nerve. The majority of people who have received an ABI have neurofibromatosis type 2 (NF2). NF2 is a genetic condition that affects about one in 40,000 people and is characterised by the presence of bilateral vestibular schwannomas.

The presence of these tumours, or the surgery to remove them, usually results in total deafness. Other more recent indications for ABI are for children with cochlear or auditory nerve agenesis or hypoplasia (absent or malformed cochleas or auditory nerves). Indications for ABI also include children and adults for whom cochlear implant surgery is complicated by the presence of total cochlea ossification following meningitis or otosclerosis and patients who have damaged auditory nerves as a result of a skull base fracture [1, 2].

In Manchester we have experience of using the ABI from two manufacturers: Cochlear and Med-El. Both systems consist of an electrode array which is paddle-shaped with a number of small disc electrodes (Figure 1). The array is inserted on to the surface of the cochlear nucleus of the brainstem in the lateral recess of the fourth ventricle. The device stimulates the auditory pathway at a higher level than the damaged auditory or VIII nerve. During surgical placement of the ABI, electrodes on the array are stimulated and electrically evoked auditory brainstem responses are recorded to aid the surgeon in the optimal placement of the device on the cochlear nucleus. 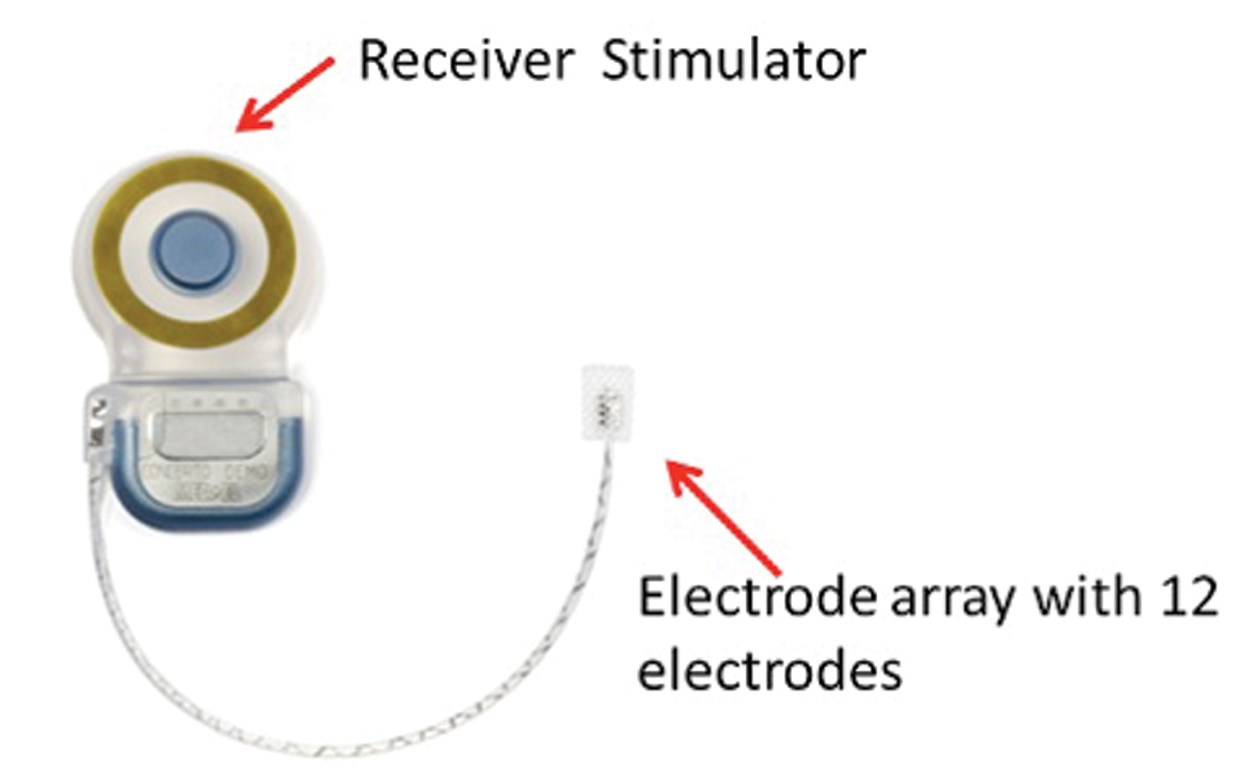 Post-operatively, the ABI is set up in a similar manner to a CI with individual electrodes stimulated to establish threshold and comfortably loud levels of response which are then used to form a programme within a conventional speech processor (Figure 2). There are, however, notable differences between the programming of a CI and ABI. 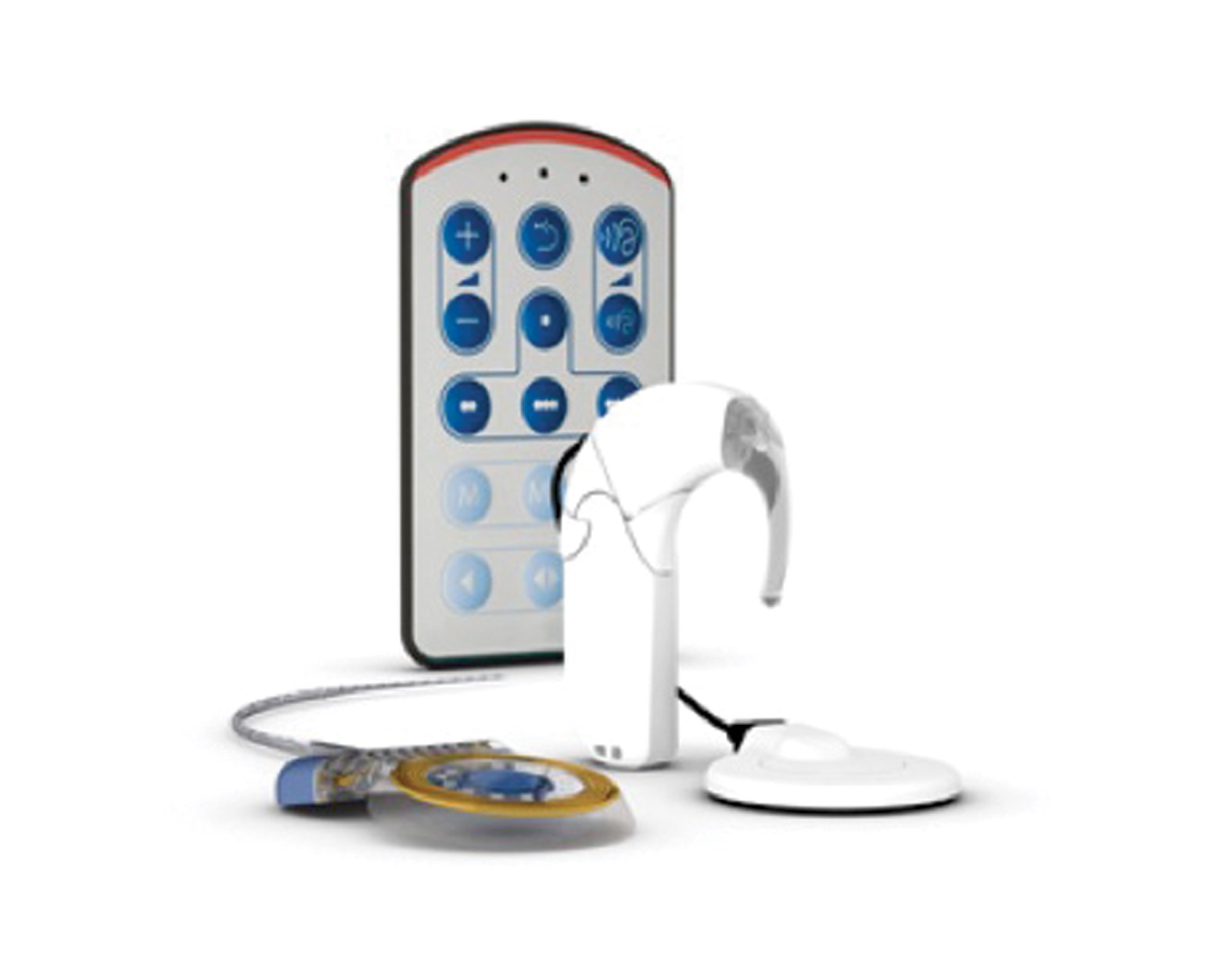 Figure 2: The Med-El Opus 2 Sound Processor for use with the Med-El auditory brainstem implant (ABI).

Stimulation of the ABI electrodes may produce side-effects by activating neural tissue that is not part of the central auditory pathway. Patients report a variety of non-auditory sensations including dizziness and sensations in muscle groups down the body ipsi-lateral to the side of the implant. Patient feedback is important in establishing the non-auditory sensations and electrodes that produce side-effects are deactivated and not used in the take-home programme.

The CI takes advantage of the well defined tonotopic map within the cochlea in which stimulation of electrodes positioned in the basal end of the cochlea will elicit a higher pitch sensation than those positioned in the apical end. In contrast, the tonotopic map within the cochlear nucleus runs parallel and obliquely through the nucleus [3, 4] and the ABI positioned on the surface does not stimulate neural structures in such a clear, tonotopically ordered way. To optimise the clinical fitting of the ABI, the clinician must rely on the patient to report the relative pitch perceptions produced when each electrode is stimulated in order to create a patient specific tonotopic map.

Speech perception outcomes with an ABI are generally poor compared to those reported in multichannel CI users, although good open set speech discrimination is possible with the device. Reasons for the poorer ABI outcomes may be due to the presence of non-auditory side- effects limiting the overall number of electrodes that can deliver useful frequency information coupled with poor frequency specificity delivered by a restricted tonotopic range. In addition, the debilitating disease process of NF2 may take its toll. Colletti and his colleagues from Verona have described outcomes of ABI in non-tumour patients compared with the traditional tumour (NF2) patients [5]. Some of the non-tumour subjects achieved good speech discrimination without lipreading and they compared well with the best CI results. The presence of the tumour in NF2 was believed to have damaged specialised cells in the cochlear nucleus important for speech perception. The better outcomes for non-tumour cases led to the use of ABI for children born deaf with cochlear nerve aplasia or hypoplasia [6].

The first ABI was performed in Manchester in 1994 and to date 63 patients have received an ABI system. All but three of these patients have NF2, one has bilateral vestibular schwannoma not related to NF2, one has otosclerosis with a previous removal of a CI following infection and the third non-NF2 patient has aural polyps preventing the insertion of a cochlear implant. The patients range in age from 12 years to 73 years with a mean age of 30 years. Twelve patients had their implant inserted during removal of their first vestibular schwannoma whilst retaining useful hearing in their contra-lateral ear. Typically, these patients do not use the ABI until the hearing has deteriorated or the tumour has been removed from the contra-lateral ear. Four of these patients are now using their ABI. One patient has received a bilateral ABI.

The incidence of cochlear nerve aplasia or hypoplasia is not certain, however, most paediatric cochlear implant teams will have been referred children who have absent cochlear nerves. The only hearing option for these children is an ABI. With the experience gained from both a large paediatric CI programme and relatively large ABI programme and after careful consideration of the ethical issues involved, the team in Manchester have offered ABI to six congenitally deaf children with cochlear nerve aplasia or hypoplasia. In addition, we have taken on the care of three children who received their ABI in another centre. The children, six boys and three girls, were aged between one year, six months, and four years, nine months, at the time of implantation. 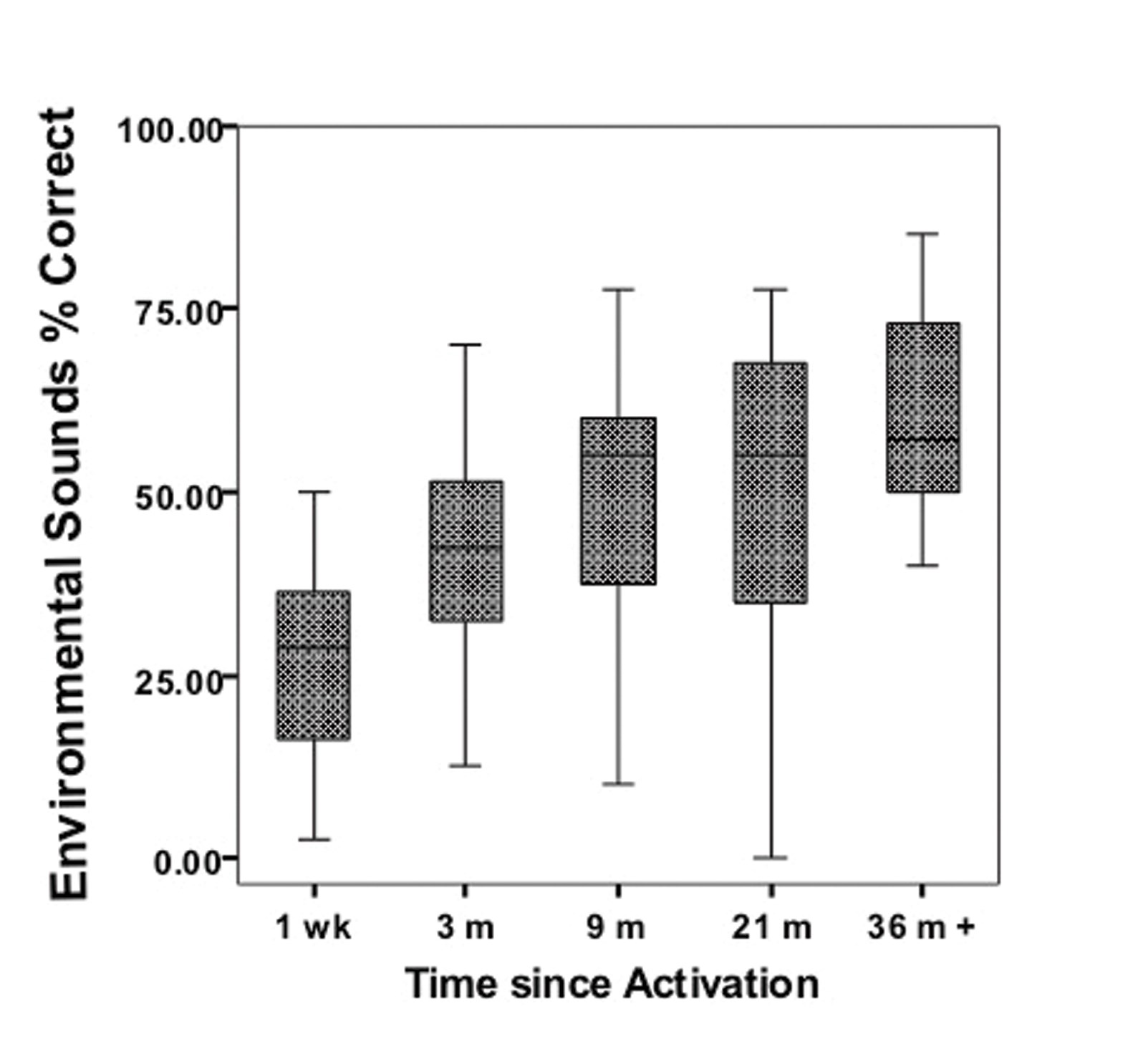 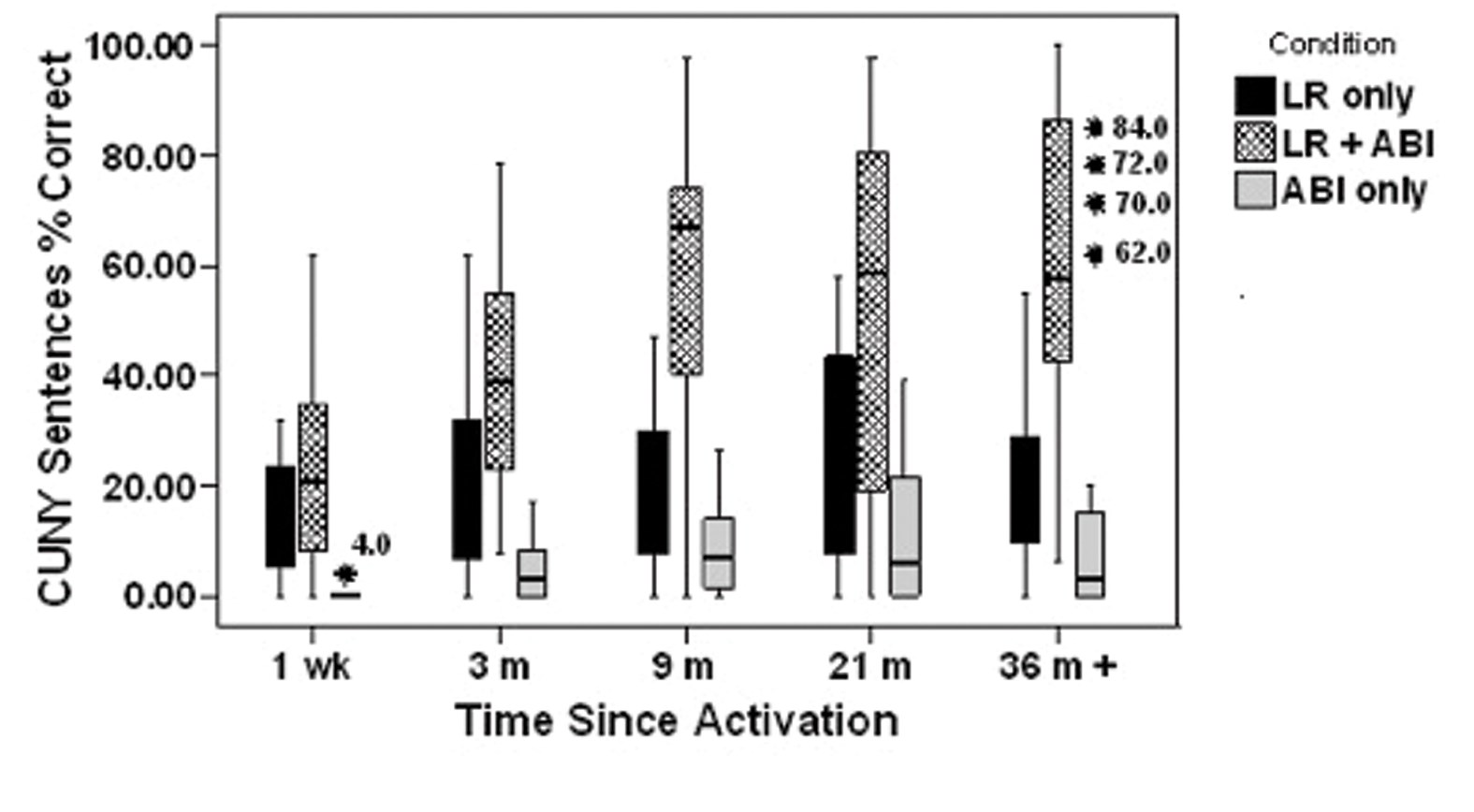 Figure 4: CUNY sentences discrimination in three conditions: lipreading (LR) alone, LR and auditory brainstem implant (ABI) together and ABI alone in adults and older children (n = 31). Boxplots indicating median value with inter-quartile range and the upper and lower range of measures except for outliers more that 1.5 box lengths from the box edge.

Figure 3 shows the results from a standardised, recorded test of 20 environmental sounds in the auditory only condition. Results are displayed over time up to 21 months post activation of the implant and then the best percentage score obtained for patients at any time after 36 months of implant use. Figure 4 shows results from standardised, recorded CUNY sentences in three conditions: lipreading (LR) alone, LR and ABI together and ABI alone. Results are presented over time with the result after 36 months representing the best score obtained. Progress with the ABI is slow and for most patients, the ABI acts as an aid to lipreading and gives an awareness of environmental sounds. Of interest, however, is that four patients are able to achieve significant open set discrimination with the ABI (note outliers in the 36 m +, CUNY sentences, ABI only). These patients have NF2 and it is not entirely clear why they score so much higher than the rest. They are, however, patients that report clear and consistent pitch variation across the electrode array.

Two (22%) of the children have shown no evidence of hearing with their ABI and no longer use the device. Parents of the remaining children report that the ABI is used on a daily basis, although not all wear their processors all day. The majority of the children will ask to use their speech processors and in all but one family the parents are aware when the processor is broken due to changes in their child’s auditory responses. One child communicates predominantly using spoken language; they are able to understand familiar spoken language without lip patterns but rely heavily on lip reading in everyday interactions. Sign language is used in school to support understanding of new vocabulary and concepts. Four children use sign as their main mode of communication; they do use their voice in conjunction with sign, however their speech would only be understood by people familiar with the speech of profoundly deaf people. These four children all demonstrate an ability to detect sound across the speech frequencies but have varied abilities to imitate speech sounds. All the older children are educated either in schools for the deaf or resourced base units attached to mainstream schools. Sign is used in all educational placements.

At present it is too early to predict the outcome for the two youngest children or to know what their primary communication mode will be. There is evidence of emerging speech discrimination in one of these children; the other child is reported to be responding to environmental sounds.

Apart from the four notable exceptions, the results of the ABI for adults and older children, mostly with NF2, are limited compared with typical results from CI users. It is important to emphasise, however, that from the recipients’ point of view, the ABI is the only hearing option available and the benefits achieved with lipreading and awareness of environmental sounds are regarded as a worthwhile connection to the hearing world.

The small number of children with an ABI makes it difficult to be conclusive about the potential for an ABI to provide sufficient auditory information to enable the acquisition of meaningful speech and language. The majority of children do not appear to be able to gain adequate information from their ABI to develop speech although it may provide some auditory benefit. In general, the outcomes of ABI in children are very limited compared to those seen in children with cochlear implants. To achieve the maximal potential with an ABI we will need to capture the benefits of auditory plasticity and provide the implant at a younger age. This will, of course, present even greater challenges in the programming of the device and will call upon the highest levels of skill and experience from the implant team. 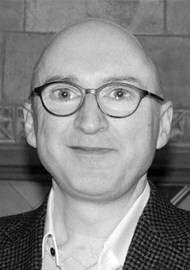 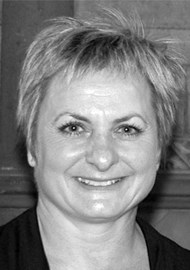 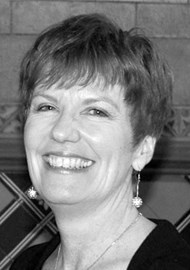