Cisplatin is a commonly used cancer therapy, with nearly 50% of patients undergoing chemotherapy receiving cisplatin as part of their regimen [1]. Depending on the dose, incidence of hearing loss has been reported as 12-100% in adults, and 37-94% in children.

As there are currently no Food and Drug Administration (FDA) approved measures to prevent or reverse ototoxic sensorineural hearing loss (SNHL), it is imperative to pursue potential protective strategies that are safe, effective, and non-inhibiting of the desired effect of the primary therapeutic.

Several pharmaceutical agents have been tested for prevention of drug-induced hearing loss. At this time, few agents have moved to clinical trials. The primary concern for otoprotective molecules, particularly those administered systemically, is potential decreases in the anti-tumour efficacy of chemotherapy. While intratympanic and other localised injections to the middle or inner ear have been proposed as a solution to mitigate systemic, pro-oncogenic effects; these strategies are also limited by drug permeability, distribution in the cochlea, and clearance. For example, dexamethasone has been shown to have limited permeability through the round window and has a high rate of elimination. Furthermore, inner ear injections of small molecules and viral vectors can leak out of the cochlea and cause more far-ranging effects outside of the ear, in some cases the targeting of many areas of the central nervous system. Other agents under research for protection against cisplatin ototoxicity include D-methionine, ebselen, N-Acetylcysteine, vitamins, etc [2]. Most of these agents have antioxidant properties which may raise concerns for anti-tumour efficacy if delivered systemically.

“The primary concern for otoprotective molecules, particularly those administered systemically, is potential decreases in the anti-tumour efficacy of chemotherapy”

Studies from several fields suggest that mild therapeutic hypothermia (MTH) can protect against renal, cardiac, and neurological injuries and counter the effects of toxins, free radicals, and other damaging molecules. Previous research has also demonstrated that systemic or localised hypothermia can protect cochlear cells against noise-induced or iatrogenic damage caused during cochlear implant surgery [4,5]. Based on this literature, we hypothesised that localised cooling of the ear canal, which we call Cool OtOprotective ear Lumen (COOL) therapy, can protect inner ear hair cells from ototoxic drugs.

“While MTH is not a novel concept, its application to mitigate and prevent drug-induced hearing loss represents an innovative non-pharmacological otoprotection approach”

In proof-of-concept studies, we demonstrated that localised cooling of the ear canal in guinea pigs prevented hair cell death and mitigated cisplatin-induced hearing loss (CIHL), while warming of the ear exacerbated CIHL [5]. More recently, we have extended this work by examining different dosing regimens of cisplatin, short and longer-term effects, and an alternative method of cooling that uses a Peltier device coupled with an aluminum earpiece, confirming the protective effect [6]. In this recent work, ear cooling was able to reduce cochlear hair cell death by 50% or more in middle and basal turns and preserve hearing function for at least one month after the cessation of cisplatin treatment (Figure 1). 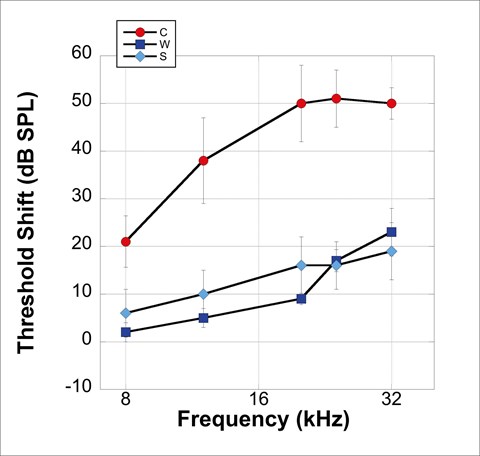 Figure 1. Mild therapeutic hypothermia and cisplatin-induced hearing loss. Guinea pigs (n = 12) were administered three rounds of cisplatin injections (4mg/kg) with simultaneous ear canal cooling using water (W) or static ear bar (S) and compared to cisplatin-only controls (C) one month after the final dose. A mean shift of 50 dB was observed at frequencies above 16000 Hz in control animals, while cooled ears only incurred 15-20 dB shifts on average in the same frequency region. No significant difference was observed between cooling condition with water or ear bar attached to a Peltier device.

We are currently conducting experiments to examine the mechanisms of MTH prevention of CIHL, characterise parametrics for clinical translation, and identify effects on vestibular structures and function. While MTH is not a novel concept, its application to mitigate and prevent drug-induced hearing loss represents an innovative non-pharmacological otoprotection approach. We anticipate the translation of this work to clinical populations as either primary or adjunct therapy along with pharmacological-based otoprotection strategies. 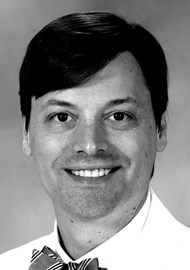 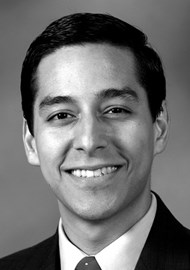