In conversation with Jayne Fletcher-Brander
Interviewed by Gareth Smith

What is the process to bring music to a Deaf audience and does it enhance the experience of the hearing viewers? In this interview, Deaf SingSong performer, Jayne Fletcher-Brander takes us through the journey of bringing a signed musical performance to life. 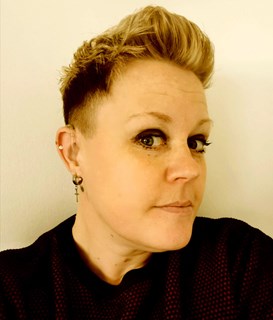 Does signed music work along traditional sign language (such as BSL)?

For me, my first language is British Sign Language. BSL is a language in its own right that has its own grammatical structure and syntax which does not relate to spoken English. Whilst there is a variety of different signing communication methods such as Sign Supported English (SSE) and Makaton, which is used in Britain, none of them have the status of an official language and would not be considered ‘traditional’. I translate spoken songs into BSL because, when signed in English order, the meaning is lost and does not make sense.

“Whilst driving, I listen to the radio and when songs are played I get an idea of the tone of the singer and the beat of the song”

Are there styles of music which better suit translation into signing performance?

Everyone has their own preferences regarding what music they enjoy, and this can influence what songs they chose to translate. Therefore, I believe it is not a case of what is better suited for translation because, after all, anything can be translated from one language to another, but rather personal taste. Personally, I prefer pop songs and big ballads by artists such as Pink, Anne-Marie and Celine Dion, to name a few. 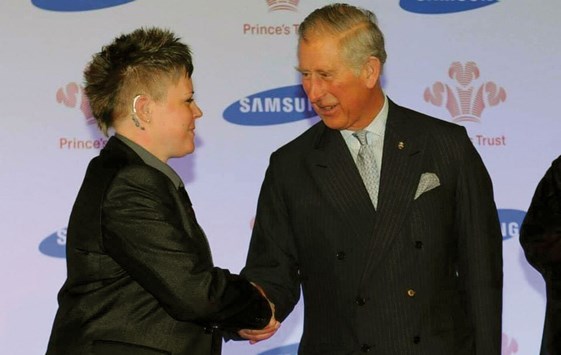 Jayne with Prince Charles in 2013 after receiving The Princes Trust Young Achiever’s Award.

What is the creative process involved in translating aural music to signed music?

Whilst driving, I listen to the radio and when songs are played I get an idea of the tone of the singer and the beat of the song. Using the Shazam app, I find out the song name and who the artist is. In the good old days of MTV, The Box and Top of the Pops, I used to watch music videos and decide if I wanted to translate it. Songs are also recommended by friends. Once I have the song, I listen to it repeatedly whilst reading the lyrics over and over until my English lip-sync is sufficiently matched with the artist. I then translate the meaning with either my wife or my hearing friends who will help me with what some of the English words mean. Once that’s complete, I put the whole of it together: my signs and translation, the lyrics, the lip pattern, the tempo and beats, and practise until perfect.

“As no two hearing peoples’ voices are the same, each Deaf person’s deafness is unique to them”

I have had so many positive comments from my hearing audience members on my social media, fan mail and in person, so I will draw on their experiences to hopefully answer this question. Many people have said that it brings a whole new other level of emotion into a song when visually ‘listening’. Songs are about so much more than a good voice or a catchy tune. When paired with BSL, sad songs become an emotional rollercoaster ride, where some are left in tears. Inspiring songs become extra powerful and have motivated people. Overall though, signed songs pack a bigger punch on the senses. Many people have remarked that they did not realise what the song was actually about because they paid no attention to the lyrics before.

How does a Deaf performer interpret the rhythm/beat of the music?

As no two hearing peoples’ voices are the same, each Deaf person’s deafness is unique to them. There is a multitude of different voices and, thus, a multitude of different levels of deafness. That will affect how each Deaf SignSong performer will interpret the musical beat etc. I follow the voice of the artist and, whilst it lacks clarity, I can use it as a cue. I can also hear certain beats which help me to time the rhythm. I will go between beats and count how many seconds musical interludes are or use a particular pattern of beats to start my timing. The process is very long and, on average, takes around three weeks to perfect.

Whilst performing I also have to do a sound check beforehand because each acoustic environment wields its own sound and can alter what beats I can and cannot hear, but I plan for this just in case. I also ask the sound coordinator to turn off the bass because I do not like any vibration as it coincides with my counting and takes me way off time. 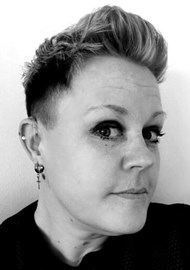 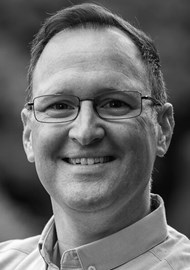