Physiological mechanisms of hyperacusis: an update
By Benjamin D Auerbach

Hyperacusis is a heterogeneous and complex clinical entity, and proposals about physiological mechanisms should reflect these issues. Ben Auerbach helps us navigate through present knowledge in this area, and proposes future directions for research.

Hyperacusis is a debilitating hearing disorder that affects up to 10% of the general population. Advancing diagnosis and treatment of hyperacusis requires a better understanding of its underlying neural mechanisms. This is complicated by the diversity in both its cause and clinical presentation. This update will discuss recent efforts to model distinct forms of hyperacusis in animals to help elucidate potential mechanisms underlying this diverse disorder.

Hyperacusis encompasses a wide range of reactions to sound and, as such, its definition has been amorphous. Four subtypes of hyperacusis have recently been identified based on clinical presentation: excessive loudness, annoyance, fear, and pain [1]. Hyperacusis is often associated with hearing loss and the phantom sensation of tinnitus. Sound tolerance disturbances are observed, however, across a wide range of neurological disorders. These include neurodevelopmental disorders like Williams syndrome and autism spectrum disorders (ASD), psychiatric disorders like depression and post-traumatic stress disorder (PTSD), as well as chronic pain disorders like fibromyalgia, migraine, and complex regional pain syndrome (see Figure 1). Thus, hyperacusis is diverse in both its etiology and expression, and it is imperative to consider this diversity when attempting to define its physiological mechanisms. 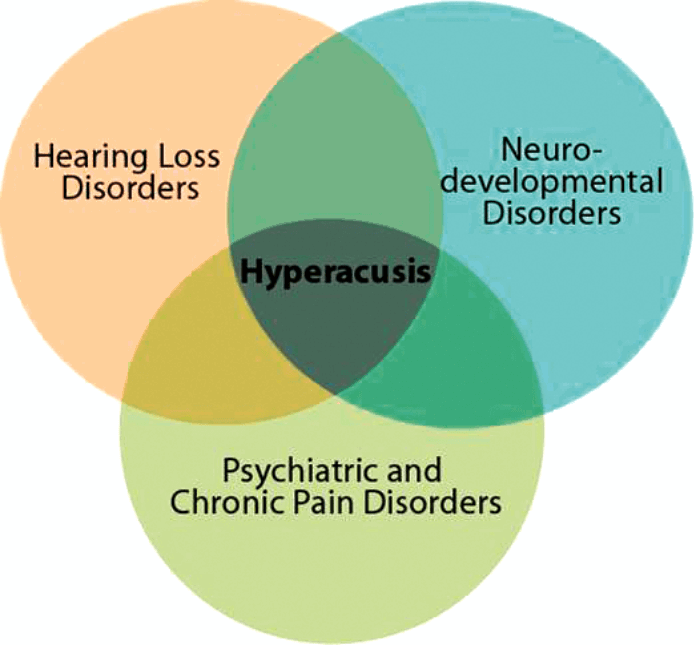 Figure 1. Diversity in Hyperacusis. Hyperacusis occurs in a broad spectrum
of neurological disorders and encompasses a wide range of sensations.

Loudness hyperacusis, where moderately intense sounds are judged to be excessively loud, is the best characterised form of the disorder. Evidence points to excessive central gain enhancement as a major mechanism underlying loudness hyperacusis. In order to maintain sensitivity across an enormous range of intensities, central auditory neurons adapt their responsiveness, or ‘gain’, with changes to auditory input. If these gain control mechanisms are dysregulated, hearing loss can cause a maladaptive over-amplification of peripheral input, resulting in higher spontaneous and/or stimulus-evoked neural activity, which may present as tinnitus and/or hyperacusis, respectively (see Figure 2). 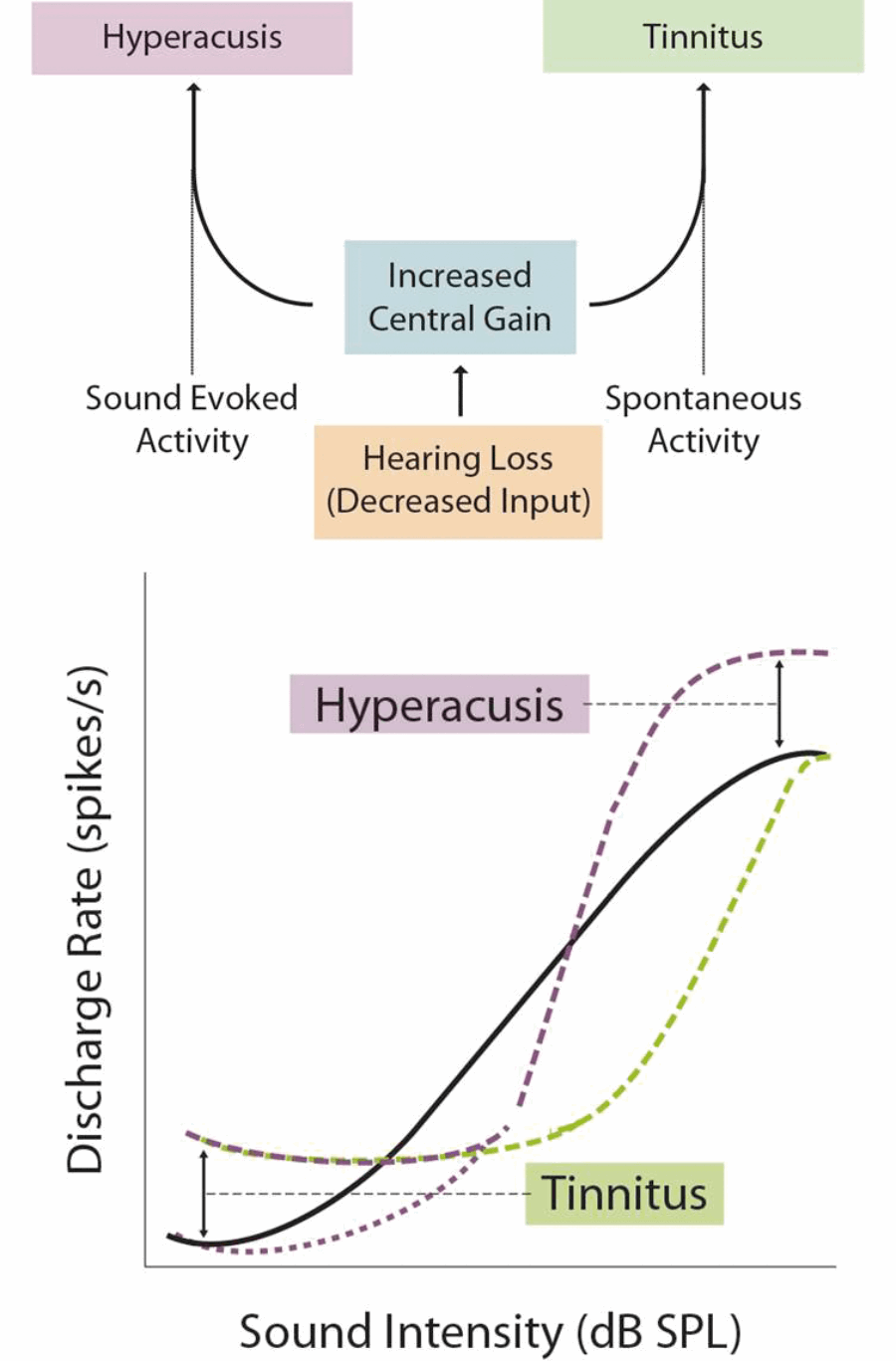 Numerous studies in humans and animal models have found a paradoxical increase in sound-evoked activity following hearing loss, in regions spanning from the cochlear nucleus to the auditory cortex. In a recent study, my colleagues and I used a novel behavioural-electrophysiological paradigm to demonstrate that changes to loudness growth and neuronal gain enhancement were strikingly correlated within individual animals [2]. These results indicate that neuronal gain changes along the central auditory pathway are a likely mechanism underlying loudness hyperacusis.

While there is strong support for the central gain model, less is known about how these neuronal gain changes are implemented at the cellular and molecular level. One possible mechanism is homeostatic plasticity which, in essence, is a form of cellular gain control that allows neurons to increase/decrease their overall activity level in response to changes in synaptic input (see Figure 3). 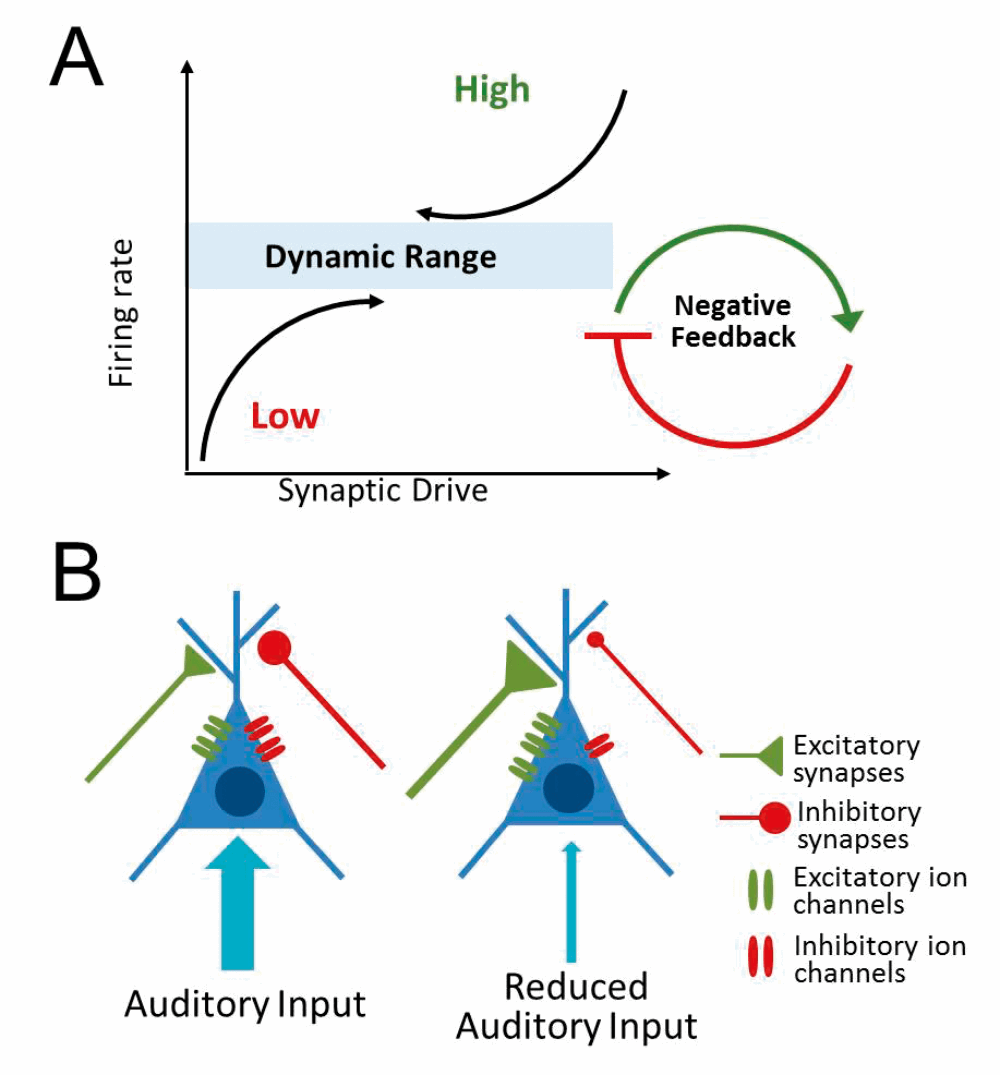 Hearing loss is likely to evoke a homeostatic increase in neural activity in attempts to compensate for decreased auditory input. Increased neuronal excitability and/or reduced synaptic inhibition has been observed in several auditory regions following hearing loss, particularly the auditory cortex. How these changes relate to central gain enhancement and/or hyperacusis remains to be determined. It is also essential to elucidate the cellular and molecular signalling cascades that mediate these homeostatic changes, as this information is critical for developing treatments that could potentially reverse or prevent the development of loudness hyperacusis.

“Hyperacusis is diverse in both its etiology and expression, and it is imperative to consider this diversity when attempting to define its physiological mechanisms.”

Annoyance and fear hyperacusis are associated with an overly negative emotional reaction to certain sounds. Individuals with these forms of hyperacusis often exhibit avoidance behaviour, attempting to remove themselves or avoid situations where triggering sounds may occur. Manohar and colleagues recently attempted to assess the aversive nature of sounds in rodents using an Active Sound Avoidance Paradigm (ASAP), where rodents must move from a preferred dark, enclosed space to an innately aversive bright, open compartment in order to avoid a loud sound [3]. Interestingly, long-term hearing loss altered avoidance behaviour in a frequency-dependent manner, with animals exhibiting exaggerated avoidance behaviour only to sounds below the region of hearing loss, indicative of low-frequency avoidance hyperacusis.

The brain areas responsible for this avoidance behaviour remain to be determined. It is interesting to note, however, that similar frequency-dependent changes to sound encoding have been observed in limbic auditory regions like the lateral amygdala of noise-exposed rodents. Moreover, human neuroimaging studies have shown that many individuals with hyperacusis exhibit alterations to limbic areas that ascribe emotion and salience to sensory input. Thus, while loudness hyperacusis is likely related to changes in sound encoding along the classical auditory pathway, avoidance and fear hyperacusis may be more related to changes in non-classical auditory areas that are important for integrating the acoustic and affective properties of sound. This may be particularly important for sound intolerance observed in neurological disorders that do not typically present with peripheral hearing dysfunction but do have well-characterised deficits in emotional processing (see Figure 1).

Pain hyperacusis is the least understood form of hyperacusis and, until recently, the concept of noise-induced pain was a mystery to researchers and clinicians. These hyperacusis patients feel auditory-evoked pain at much lower sound levels than in normal listeners and report feeling a sharp stabbing pain in the ear or the head in response to certain sounds. Interestingly, several recent studies have implicated a novel pathway from the ear to the brain in signalling noxious or painful auditory stimuli, termed ‘noxacusis’ or auditory nociception [4,5] (see Figure 4). 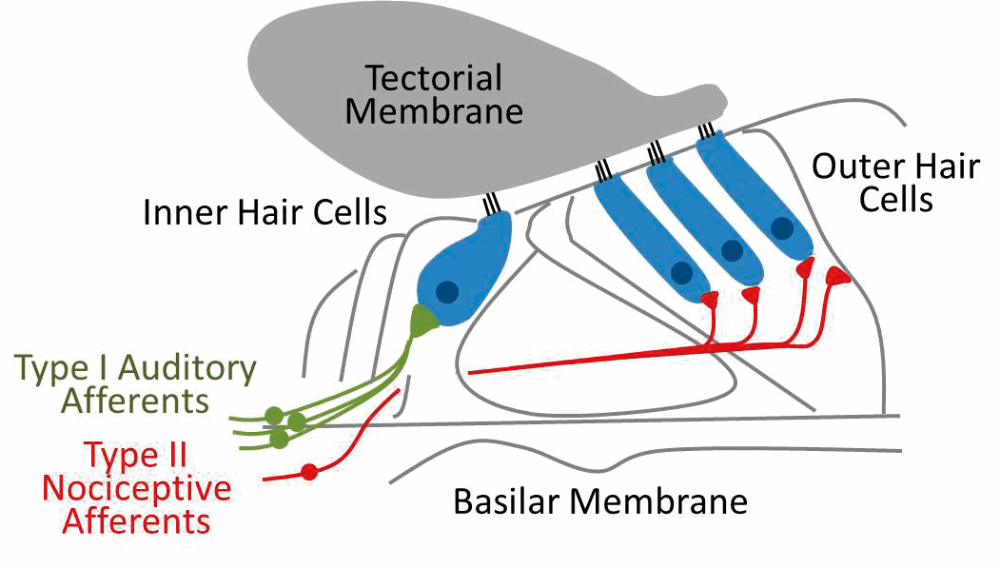 Figure 4. Auditory nociception. The majority (~95%) of input to the central auditory system comes via the myelinated Type I fibres (green) that synapse with inner hair cells. Unmyelinated type II fibres (red) synapse with the outer hair cells and surrounding support cells and are poorly activated by neurotransmitter release but strongly activated by tissue damage, suggesting their primary role may be in signalling noxious or painfully loud sounds.

This pathway involves the poorly understood type II auditory nerve afferents, which share many anatomical features with the nociceptive C-fibres of the somatosensory system. While type II afferents are only weakly activated by sound, they are strongly activated in response to tissue or cellular damage in the cochlea. Thus, these fibres may be acting as nociceptors, providing a pain signal to the brain in response to damaging auditory stimulus. In fact, Flores and colleagues demonstrated that auditory brainstem neurons still responded to noxious noise (120dB SPL) in mutant mice bred to have non-functional type I afferents, strongly suggesting the type II afferents were driving this response. It is possible that pain hyperacusis involves increased sensitivity or inappropriate activation of this type II system. Future work must determine:

Continued refinement of the clinical definition for hyperacusis has greatly informed current approaches to understanding the physiological basis of the disorder. A fundamental question that remains for hyperacusis research is whether different forms of hyperacusis are mechanistically distinct disorders with overlapping presentation, or if they converge on a common pathophysiological mechanism. Current evidence suggests that different forms of hyperacusis may be mediated by distinct mechanisms. Future work must directly examine the various aspects of hyperacusis (loudness, emotion, pain) within the same subjects in order to determine how they may, or may not, overlap. Additionally, efforts must be made to model hyperacusis of etiology unrelated to hearing loss. For instance, there are well-developed genetic models of autism that may provide a novel avenue for examining mechanisms of decreased sound tolerance. With continued research, the field is positioned to make great insights into the pathophysiological mechanism of hyperacusis and, most importantly, develop novel therapies for this often devastating disorder. 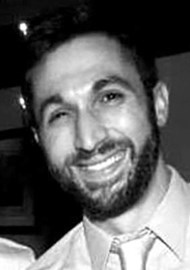