Plasticity with cochlear implants: individual factors in the outcomes
By Andrej Kral

Andrej Kral gives us an overview of neuronal plasticity in congenital hearing loss, and discusses why it is core to our clinical interventions in hearing loss and rehabilitation.

The brain is born immature and undergoes extensive shaping during early development. The child’s brain is a learning machine; it receives information from the environment, builds it into its neuronal circuits and, by that, learns to cope with the environment. It learns to walk and to talk, but along with these it also builds up a complex system of cognitive skills. Sensory systems are the entrance gates for inputs from the world around us, and the motor system permits active interaction with the world that the senses are currently ‘scanning’.

The child can thus ‘test’ its internal model of the surroundings by active motor interactions that affect the surroundings and, in turn, have consequences observable through the sensory systems. The active exploration thus constitutes a closed loop to establish a consistent internal model of the world. The motor system, along with the rest of the brain, is an integral part of active sensory learning.

“Additional to the number of synapses, which is developmentally determined in the process of synaptogenesis and synaptic pruning, the efficacy of existing synapses can also be changed both in adulthood and childhood.” 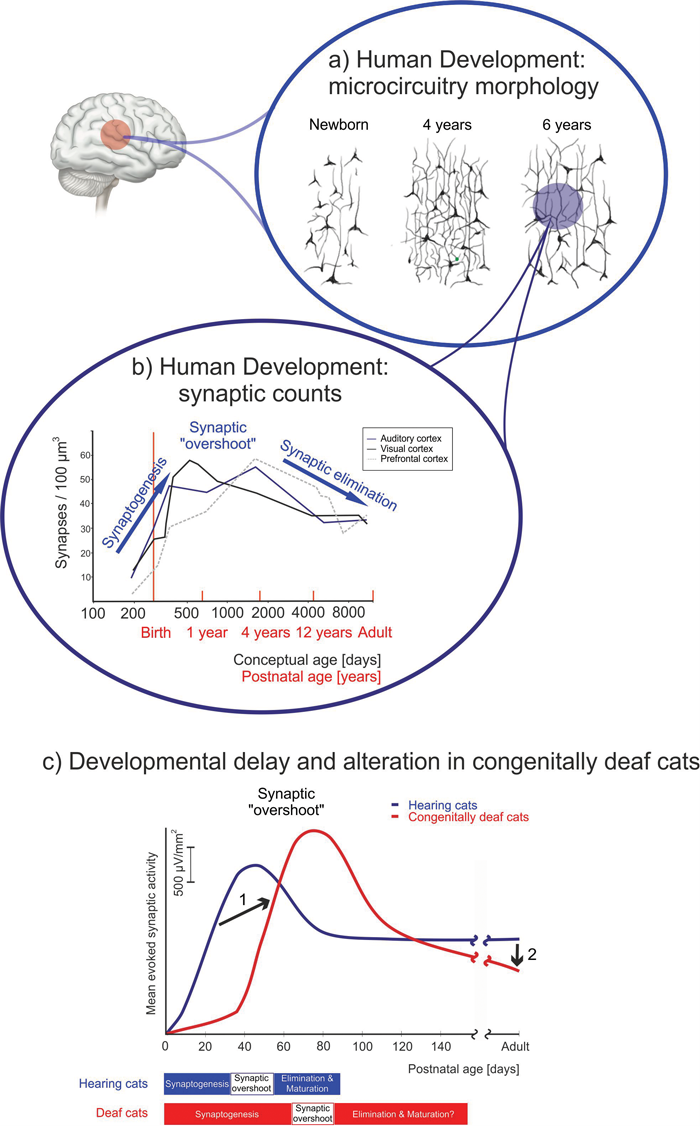 Figure 1: Synaptic development of cortical synapses [8]. a) Morphology of Golgi-stained neurons in hearing children demonstrated an extensive morphological change in the first six years of life [6]. b) Development of synaptic counts in the auditory cortex of hearing children [7]. c) A developmental delay (1) and an enhanced synaptic pruning (2) were observed in congenitally deaf cats (red line) compared to hearing cats (blue line) [8].

Neural plasticity is the correlate of learning. It is the capacity of the nervous system to persistently reorganise functionally in response to sensory experience and use. Plasticity can be incidental or intentional, and can be further differentiated into developmental and adult, injury-related or use-related [1]. The eventual substrate of learning is a change in interneuronal (synaptic) communication; an increase or decrease in synaptic efficacy. In the cerebral cortex, the highest centre of the brain responsible for the most complex functions, and there is an extensive growth of the dendritic trees during first four years of life (see Figure 1a). The vast majority of synapses develop during this time and ~50% of them are eliminated afterwards [1] (see Figure 1b).

Additional to the number of synapses, which is developmentally determined in the process of synaptogenesis and synaptic pruning (see Figure 1b), the efficacy of existing synapses can also be changed both in adulthood and childhood. Changes during childhood are, however, faster and more extensive. This is based on a genetic blueprint that makes the juvenile synapse more plastic. The molecular machinery of synaptic transmission matures with increasing age (see Figure 2), eventually reducing synaptic plasticity to a lower (adult) level.

Figure 2: A neuronal synapse consists of a presynaptic and a postsynaptic part, separated by a synaptic cleft. Activity reaching the presynaptic button releases a neurotransmitter (typically glutamate) that binds to receptors of the postsynaptic neuron and causes channel opening and depolarisation. The efficacy of this process can be modulated by changes in the amount of transmitter released and by changes in the ionic channels bound to the receptor. Depolarisations (postsynaptic potentials) from a juvenile (red) and an adult (grey) neuron from a rat [9] differ in a longer opening time of a juvenile synapse, leading to higher potential for plasticity.

Neuronal plasticity is of central importance for clinical approaches to hearing loss and its therapy. Since hearing loss directly imposes a change in sensory input, it initiates plastic reorganisation in the brain. Such reorganisation leads to larger and stronger representation of the functional regions of the inner ear. Restoration of hearing consequently requires the reverse (and additional) change of sound representation. The efficacy of these plastic processes defines the therapeutic success.

Furthermore, congenital deafness extensively interferes with the synaptic developments in the auditory cortex (see Figure 1c). The synaptogenesis is delayed and the subsequent synaptic pruning amplified, resulting in severely degraded neuronal circuits in the congenitally deaf brain [2]. This leads to a naive auditory system with numerous functional deficits, including reduced responsiveness, firing rate, dynamic range and cochleotopy; timing and binaural sensitivity are also affected [3]. These cause a reduced sensitivity to details of acoustic input (reduced feature sensitivity) which affects the ability to discriminate auditory stimuli and speech sounds. Additionally, the auditory system needs to integrate acoustic features into auditory objects.

Auditory objects are defined neuronal representations of delimited acoustic patterns that can be subject to figure-background separation. Such patterns, like phonemes, stand out in complex acoustic environments if some of their distinctive features can be detected (or if the subject expects their occurrence). Similarly as a mother sometimes ‘hears’ the baby cry in other complex sounds (even when the baby is not crying), one becomes sensitive in detecting auditory objects embedded in noise.

Auditory objects are a consequence of categorisations of sensory features and result from the individual experience of the subject. Only with active experience can the subject learn the subjective importance of some feature combinations that may constitute an auditory (or visual) object. Object and feature representation are strongly interdependent and, under normal condition, can influence each other [1].

The basic building block of the cerebral cortex, the so-called ‘minicolumn’, is not functional in congenital deafness but becomes functional after early cochlear implantation and chronic electrostimulation [4]. Cortical columns are the neural substrate allowing interactions between object and features (bottom-up and top-down corticocortical interactions). Congenital deafness thus not only degrades feature representation and prevents establishing auditory objects, but also makes the substrate for corticocortical interactions - the cortical column - dysfunctional.

Such corticocortical interactions are important for adult learning. Adult learning occurs when our prediction about the environment (our internal model) and environmental input do not match (Rescorla-Wagner learning theory), i.e. when our internal model fails to predict sensory inputs. On the other hand, when sensory inputs and the internal model match, we cope even with very degraded sensory inputs and can easily fill out existing gaps in input [4]. Adult perception and plasticity thus depend on functional cortical columns. Consequently, in a congenitally deaf brain, the juvenile high plasticity fades out with age and cannot be replaced by a prediction-error driven, brain-controlled, plasticity: the critical developmental periods close [1] and late therapy becomes inefficient.

However, the ‘deaf’ auditory system cannot be considered in isolation from the rest of the brain [5]. Sensory systems are interdependent and complement each other, not only in the dimension of the physical quality of the stimulus. Vision and hearing - the two cardinal ‘distance senses’ - are complementary in spatial and temporal characteristics: while vision outperforms hearing by a factor of nearly 100 in spatial localisation, hearing outperforms vision by a similar factor in temporal precision. Therefore, vision cannot fully compensate the loss of hearing and vice versa. In cases of conflict, the sensory systems interact for generating a unified percept: vision dominates in spatial location and hearing in temporal decisions. 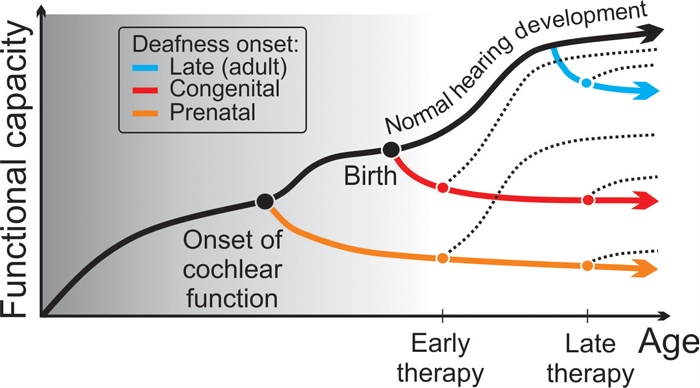 Figure 3: Schematic illustration of the effect of deafness on development of the auditory function [4,5]. The earlier the onset of deafness during development, the larger the consequences: when deafness sets in during intrauterine life, the deficits are most extensive and affect the whole auditory system (orange curve). Around birth they are less extensive, but still involve cortical development (red curve). In adult onset, the auditory system is already functional and the consequent deficits are only degenerative (blue curve). Even early restoration of hearing may show large variations in outcome (dotted lines) depending on onset of deafness.

Consequently, loss of hearing also affects brain systems beyond hearing, including other sensory, motor and higher-order systems. Depending on the exact cause, the deaf child may be influenced in its developmental timeline at different points (see Figure 3). It may exploit different strategies to cope with absence of hearing. These might be useful for different reasons after restoration of hearing. Therefore, the outcomes of cochlear implantation in deaf children are variable with respect to speech understanding, but also with respect to other brain functions, including attention or working memory. After restoration of hearing, the ‘listening strategy’, used to cope with the auditory prosthesis, likely differs in individual children [5]. It is therefore essential to support the individual hearing-impaired child in a personalised way.

“As a mother sometimes ‘hears’ the baby cry in other complex sounds (even when the baby is not crying), one becomes sensitive in detecting auditory objects embedded in noise.”

Topics of brain plasticity have translated from theoretical concepts into clinical audiology. Basic science helped to introduce cochlear implants into medical application by demonstrating – using objective methods in animals and humans, – that cochlear implantation within critical periods allows maturation of the auditory system and effectively compensates hearing loss [3]. Now, the main challenge for auditory science is to explain the outcome variations in early cochlear implantation. This may likely relate to the numerous different causes of hearing loss, different severity, different onset, even prenatal (see Figure 3) and partly also to a direct involvement of the central auditory system by the cause of the hearing loss.

Only a combined effort between basic science, genetics and audiology, neuroscience, biomedical engineering and surgery will allow one to resolve the various causes and consequences and take the challenge to help the individual child in the best possible way. 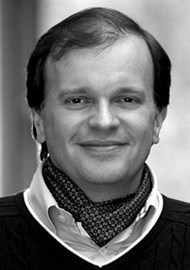