While the cochlear implant (CI) has been a tremendous success in restoring hearing to deaf individuals, the implantation outcome still varies across CI users [1]. Some demographic factors, such as duration of deafness, and peripheral factors, such as electrode placement, are shown to affect the success of the device, however, these do not fully capture the variation. We claim that cognition also plays an important role.

Speech communication is a complex process that involves more than simple transduction of sounds from the ear to the brain [2]. A large part of the process involves cognitive functions (Figure 1), as one has to selectively attend to the speech signal mixed with other sounds, and extract and correctly interpret the relevant information. Further, the message has to be stored in short-term memory, an appropriate reply has to be rehearsed, and all of these cognitive processes have to happen in a short time-frame to ensure a smooth conversation.

The speech signals transmitted through a CI are inherently degraded in spectro-temporal details due to the limitations of electric hearing and the electrode-nerve interface. As a result, CI users have to additionally deal with such degradations (Figure 1), making cognition an even more important factor in their speech communication [4].

In normal hearing, in degraded listening conditions, the brain actively works to repair the degraded speech using audible portions, as well as any supplemental information available, such as situational or linguistic context and prior knowledge or linguistic constraints. This so-called phonemic restoration presumably enhances the perception of degraded speech. A common method to quantify top-down restoration is to use meaningful sentences that are interrupted with periodic silent intervals, and measure the increase in intelligibility once these gaps are filled with a filler noise. The latter condition presumably removes spurious speech cues introduced by the gaps, and further helps the brain form a speech stream, thereby facilitating top-down restoration.

“Cochlear-implant users have to additionally deal with degradations caused by device signal transmission, making cognition an even more important factor in their speech communication.”

For perception of degraded CI speech, such top-down repair can be even more important and useful. However, it is possible that internal degradations (due to device interface) combined with external degradations (due to noisy environment) may prevent the restoration. Earlier work using acoustic simulations of CIs to test normal-hearing individuals supported this idea; the simulation that was accepted to be closest to an actual implant indeed showed a lack of restoration benefit [5]. In a follow-up study with actual CI users, Bhargava et al [6] painted a more optimistic picture. While CI users indeed did not benefit from restoration in the same conditions as normal-hearing individuals did, they could do so in modified conditions, where speech segments were made longer than the gaps introduced. Further, the CI users who in general performed better with their devices also showed more restoration benefit. While this correlation does not indicate causality (i.e. these users are better performers because they can use cognitive functions better, or a good functioning device helps both speech perception and related cognitive processes), the results hint at the importance of individual differences in cognitive skills for perception of speech with a CI (Figure 2). 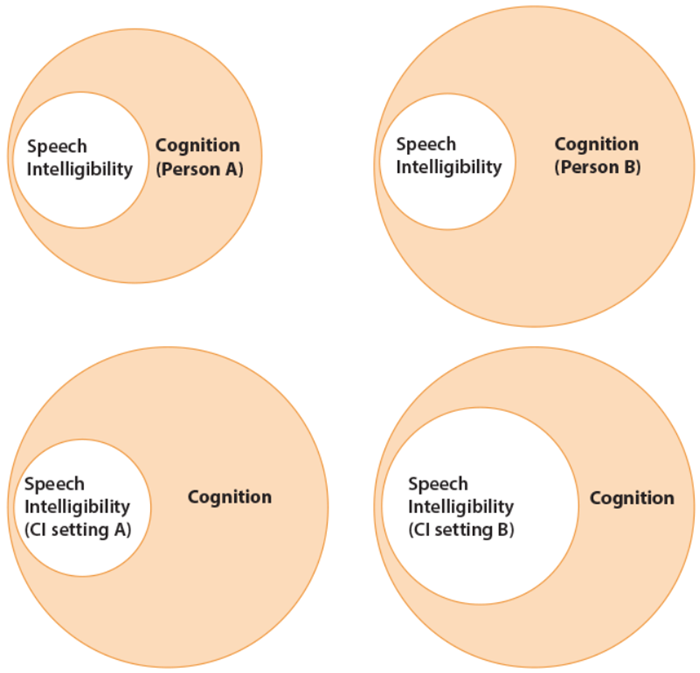 Another way cognition can interact with CI signal processing is that different device settings can affect cognitive functioning in differing ways (Figure 2, lower part). Currently, there are no clinical tools to measure cognitive speech processes. Speech audiometry only gives a score in percent correct or speech reception threshold that defines the amount of speech understood, but does not reveal any insights about the underlying cognitive and linguistic processes. A device that is purely optimised for speech audiometry may not necessarily be optimised for best cognitive and linguistic processing. This may not only affect speech communication in real-life adversely, but also may increase listening effort or cause fatigue for the CI user.

In practical terms, what these results mean is that, when two device features yield the same speech intelligibility it does not indicate that the cognitive processing required to achieve this comprehension level would necessarily be the same. For example, with two different device settings, the CI user may understand speech in quiet equally well, while one may be more advantageous, for example, in long-term remembering of the message due to more optimal cognitive load or in costing less in listening effort or producing less fatigue.

A newly implanted CI user has to re-learn to use the new and degraded speech cues for communication. The initial part of the adaptation is fast; however, improvement can continue even after the first year of CI use [9]. Therefore, any training prog-rammes that can help CI users to have an easier or faster adaptation period would be of great help to this population.

In our recent research, we have focused on two approaches to training, where we aim to help listeners to make better use of their linguistic and cognitive processes and hence learn to make better use of degraded speech cues. The first approach is based on phonemic restoration. Our initial results with normal-hearing participants, tested with or without an acoustic CI simulation, showed that, while the effect of restoration per se did not change, the overall intelligibility of interrupted speech significantly improved after a short intense training [10,11]. In a different approach, we are also implementing music training and music therapy programmes. Research on normal-hearing musicians showed that they not only perform better in music and pitch-related tasks, but they could also gain a small advantage in speech-related tasks as a result of transfer of learning from music training [12]. Indeed, preliminary data from a small group of CI users showed improvement in perception of vocal emotion after training with music therapy [13]. Furthermore, participants anecdotally reported that they not only learned how to listen better via active participation in musical activities, but they also had great fun doing so. This last factor alone could be very important in encouraging CI users to participate more in training programmes, and to more actively use their devices.

“When two device features yield the same speech intelligibility, it does not indicate that the cognitive processing required to achieve this comprehension level is necessarily the same.”

For a successful implantation, the surgical techniques, device technology, etiology, and the health of the remaining auditory nerves are certainly very important factors. However, we should not forget the brain as an important part of the auditory system because cognitive processing can also affect outcomes in significant ways. With this awareness, and knowledge about the interactions between cognition and perception of degraded CI speech, we have the potential to provide better fitting of the devices and better training post-implantation. 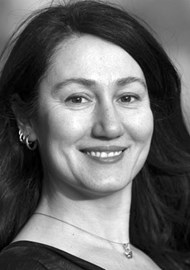