The ear-brain connection: the role of cognition in neural speech processing
By Nina Kraus and Samira Anderson

Audiologists and other hearing healthcare professionals have become increasingly interested in the importance of cognitive function in the assessment and management of hearing loss, especially in light of evidence suggesting a link between hearing loss and cognitive decline in older adults [1].

The importance of cognitive functions, such as memory and attention, for successful hearing in noise has been demonstrated in behaviour [2] and biology [3]. The audiogram, representing primarily cochlear health, is not a good predictor of speech-in-noise performance; therefore, the interacting effects of cognitive function and auditory processing ability should be considered when evaluating individuals who are experiencing communication difficulties.

The sensory-cognitive interactions that are engaged during speech-in-noise perception can be accessed with the auditory brainstem response to complex sounds (cABR). The cABR provides a faithful representation of the speech stimulus, encoding transient and steady-state speech components with sub millisecond precision. The cABR reflects stimulus qualities of pitch, timing, and timbre to the extent that the response waveform resembles the stimulus waveform both visually and acoustically. The inferior colliculus is the putative generator of the cABR [4] and is a hub of auditory learning that is modulated by top-down projections from the cortex [5]. Both short-term and long-term training can alter the cABR through repeated sound-to-meaning connections, with effects varying depending on the training and subject group [6-8]. Sensory processing can also be modulated by cognitive processing throughout the auditory pathway including the cochlea via efferent projections [9]. It therefore seems reasonable to expect that cognitive function and subcortical processing are tightly linked through bottom-up and top-down interactions.

We used structural equation modelling to better understand the interplay of sensory and cognitive factors underlying speech-in-noise perception in older adults [10]. We administered two speech-in-noise measures – the Quick Speech-in-Noise test (QuickSIN) and the Hearing in the Noise Test (HINT) to 120 older adults (ages 55 to 79) with hearing levels ranging from normal to mild to moderate sensorineural hearing loss. We also recorded the cABR using the speech syllable (da) and we administered standardised cognitive tests of attention (Integrated Visual and Auditory Continuous Performance test) and auditory working and short-term memory (Woodcock-Johnson III Test of Cognitive Abilities). We evaluated the contributions of peripheral hearing function (pure-tone thresholds and distortion-product otoacoustic emissions), life experiences (socioeconomic status and physical exercise), subcortical processing (cABR measures of response fidelity in noise and pitch), and cognitive function (attention and memory). We found that our neural metric of auditory processing and cognitive function made significant contributions to speech-in-noise (SIN) performance, whereas peripheral hearing function did not. We also found that cognitive function had an additional contribution through modulation of subcortical processing, as did life experiences (Figure 1). 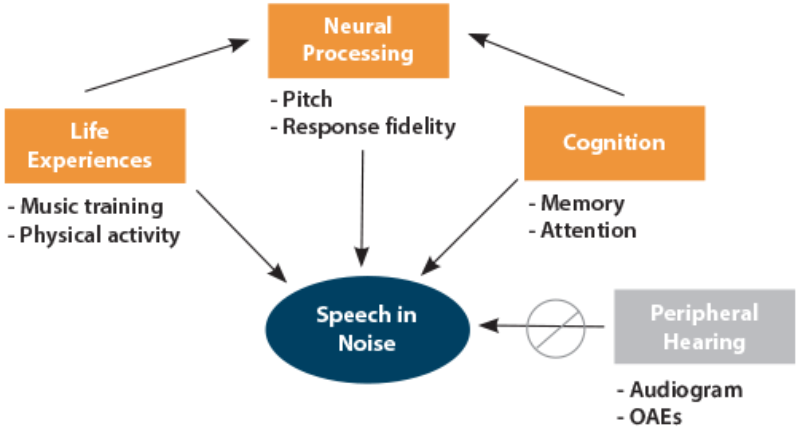 In a follow-up model, we evaluated the weighting of these variables in two groups. One group had little or no musical training (less than one year), and the other group had some musical training ranging from one to seventy-one years. We found that while subcortical processing contributed significantly to SIN performance in both groups, cognitive function played a larger role in the group with music experience while life experiences (socioeconomic status and physical exercise) were the dominant influence in the group with no music training. Musical training, with its reliance on focused attention and memorisation, may strengthen cognitive connections in difficult listening tasks. Because families with greater resources and higher socioeconomic status may be more likely to enrol their children in music lessons, we performed a multiple linear regression model that controlled for socioeconomic status and found that cognitive function was the dominant factor in both groups. Perhaps early exposure to an enriched environment, as one would expect in families with higher socioeconomic status, may facilitate reliance on cognitive resources.

The connection between central auditory processing and cognitive function is not limited to older adults. In a group of young adults that includes both musicians and nonmusicians, both auditory working memory and speech-in-noise performance track with neural response fidelity – a measure that assesses the degree to which the brainstem response resembles the stimulus [11] (Figure 2).

What drives this connection between cognition and sensory processing? One’s past listening experiences, particularly those that engage executive functions of memory and attention, can influence subsequent sensory processing. Effortful and meaningful interactions with sound, as occurs with musical training, can strengthen the cognitive-sensory networks via top down modulation. The auditory system is interconnected with prefrontal [12, 13] and reward pathways [14]. Online modulation of sensory processing through these pathways leads to strengthened neural processing to support speech perception and sets the stage for future interactions with sound [15]. Through repeated sound-to-meaning pairings, efficient sensory processing becomes more stable and automatic [16]. As sensory input degrades with ageing, activation of cognitive neural regions becomes even more important. Functional magnetic resonance imaging (fMRI) studies have demonstrated that the strength of activation in cortical areas devoted to memory and attention relate to better speech-in-noise performance in older adults but not in younger adults, suggesting that older adults rely on cognitive resources to compensate for sensory deficits [3]. Connections between cortical cognitive areas may be used to strengthen encoding of auditory signals and perhaps suppress encoding of irrelevant signals. In Figure 3, ascending projections are matched by descending projections, illustrating the need to consider the entire ear-brain connection when considering the assessment and management of hearing difficulties. For example, a cognitive screening during an audiologic assessment may guide hearing aid recommendations, and an auditory training programme that includes a cognitive component may produce more robust changes in perceptual function. cABR provides biological insight into this cognitive-sensory network in humans. 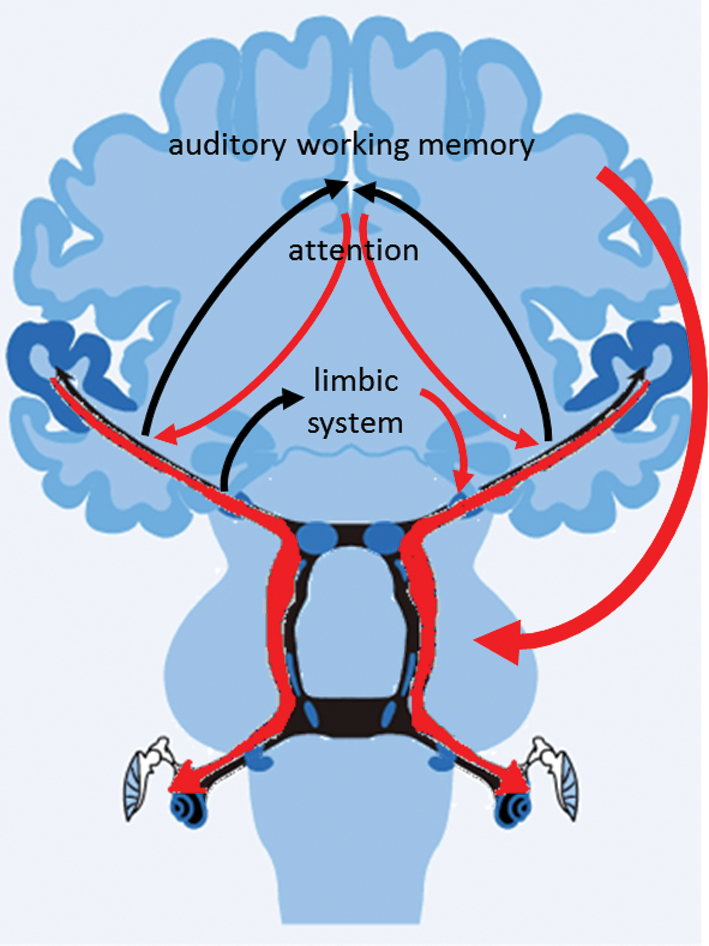 Figure 3: The ear-brain pathway consists of afferent and efferent projections, facilitating an interactive strengthening of the auditory signal and leading to enhanced hearing in difficult listening circumstances. 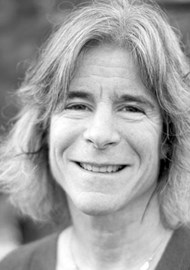 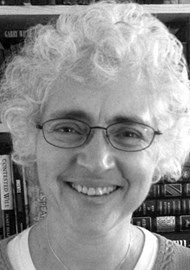