Tinnitus in middle-age: prevalence and incidence
By Mark Edmondson-Jones and Deborah Hall

Population-based studies of tinnitus provide crucial underpinning evidence which highlights the need for further research on the effective diagnosis and clinical management of this heterogenous condition. Furthermore, such studies provide evidence of the burden of this condition both on the general population but also on the provision of healthcare services.

Prevalence estimates of tinnitus in the general population provide a snapshot of the proportion of people experiencing the condition at any single point in time. In contrast, estimates of incidence tell us about the risk of developing tinnitus over a period of time by considering new cases over a defined time period. As such prevalence and incidence provide two complementary viewpoints of a condition’s scale, both of which are important to policy-makers as well as providing contextual information for clinicians and researchers.

A number of studies have investigated the prevalence of tinnitus by sampling individuals from a specified population and then assessing their experience, if any, of tinnitus symptoms. Estimates of prevalence vary significantly between studies many of which measure tinnitus according to differing criteria. The National Study of Hearing (NSH) [1] was a large survey which asked whether participants experienced prolonged spontaneous tinnitus (PST), defined as lasting at least five minutes and not being triggered only by loud noises. This study reported rates of PST of 9.8% for ages 41-50 increasing to 16.0% for ages 61-70. 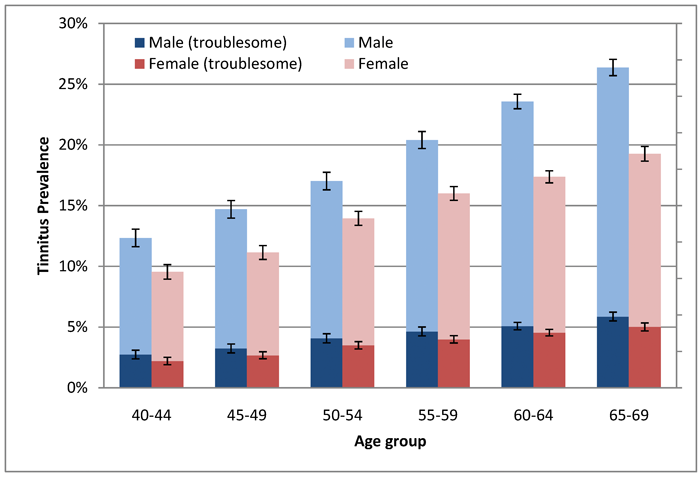 The breadth of the UK Biobank assessment makes this a powerful resource for research relating to health conditions including some relating to hearing. We have investigated associations between tinnitus and personality [3] and diet [4]. The former study revealed that having allowed for known confounders of age, sex, deprivation and hearing difficulty both current and bothersome tinnitus were strongly associated with various characteristics linked with the personality trait of neuroticism according to the Eysenck Personality Inventory. Meanwhile, the latter study identified modest, but significant, associations between intake of various foodstuffs and transient, persistent and bothersome tinnitus. In particular we noted that increased consumption of fruit and vegetables, consumption of certain (wholemeal/wholegrain and ‘other’) bread types and dairy avoidance were associated with increased risk of persistent tinnitus, while fish consumption (both oily and non-oily), egg avoidance and increased caffeinated coffee consumption were associated with reduced risk of persistent tinnitus. While this association may not be the consequence of a directly causal mechanism it is hoped that it will inform clinicians’ view of the complex interaction between lifestyle factors and tinnitus, and that it will help direct further research in this area.

Two prospective cohort studies have so far assessed the long-term incidence of tinnitus in the general population; one in the USA [5] and one in Australia [6]. While previous research goes some way towards addressing the incidence of self-reported tinnitus in the general population, it does not tell us about the impact and burden of chronic tinnitus for the health care system.

The National Health Service in England is one of the world leading custodians of anonymised patient records relevant to primary care and hospital settings. In collaboration with epidemiologists in Germany, we recently published a study [7] in which we accessed these records over a 10-year period (2002 to 2011) to investigate the incidence of clinically significant tinnitus. This identified people who attended a GP appointment about their tinnitus and were referred to otorhinolaryngology or other relevant specialist or underwent a specific procedure on the ear within 28 days of the GP visit. The cumulative incidence indicated that one person out of every 171 was likely to have experienced clinically significant tinnitus across the 10-year period of the study. More specifically for middle-aged people (40-69 years), we identified almost 170,000 new cases of clinically significant tinnitus across the 10-year period. Overall, the incidence rate increased steadily across middle-age (see Figure 2), with the highest incidence observed in men and women aged 60 to 69. These age-specific trends mirror the same patterns reported elsewhere. In our own data from the UK Biobank for example, we saw a steadily growing prevalence with age across the 40 to 69 year old sample studied. 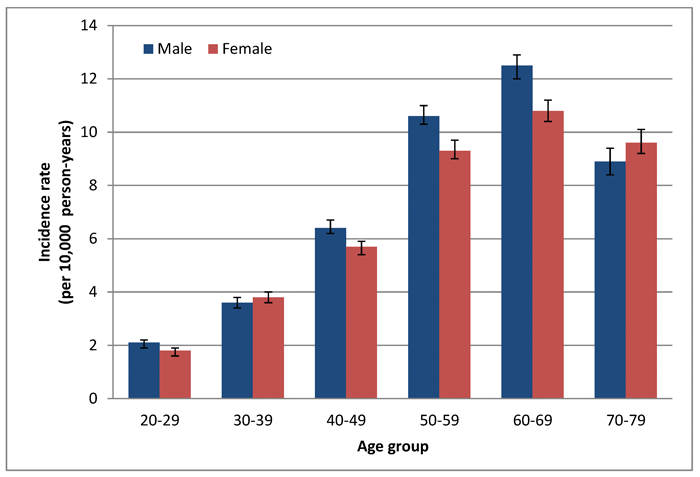 Independently of any increase in the prevalence of self-reported tinnitus we may be witnessing an increase in help-seeking for chronic conditions such as tinnitus. People nowadays have higher health expectations than they did several generations ago and so tinnitus presents a substantial and growing burden to our health care system, particularly when coupled with ageing populations in many Western countries and lifestyle changes which may increase susceptibility.

Deb Hall is the Director of NHBRU and Professor in Hearing Science, University of Nottingham. In 2012, the unit was awarded £6.25million by the Department of Health for research to help people with hearing-related problems. Deb has a first-class honours degree in Psychology from Brunel University, and a PhD in Cognitive Neuropsychology from the University of Birmingham. She spent over 12 years at the MRC Institute of Hearing Research in Nottingham before taking a new direction for her work focusing on causes and treatments for tinnitus.

Mark Edmondson-Jones is a Senior Research Fellow at NHBRU specialising in epidemiology and statistics. Mark has a first-class honours degree in Mathematics with Statistics from the University of Nottingham and an MSc in Statistics from the University of Sheffield. Prior to working at NHBRU he held a post as statistician at MRC Institute of Hearing Research in Nottingham.

Disclaimer: Both authors are funded by the National Institute for Health Research (NIHR). The views expressed are those of the authors and not necessarily those of the NHS, the NIHR or the Department of Health. The authors have made all reasonable efforts to ensure that the information provided in this review is based on available scientific evidence. 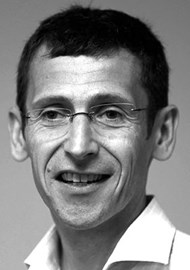 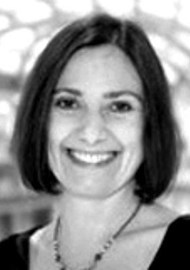