Unravelling the mystery of hyperacusis with pain
By Bryan Pollard

When a person says that sound causes them pain, how can we understand this, and determine what processes are involved? Bryan Pollard navigates us through what is presently known.

Pain has long been underrepresented – and often, completely overlooked – as a component of hyperacusis. The history of the disorder offers insights as to why. The word ‘hyperacusis’ was introduced by Pearlman in 1938. The debate for both the name of the disorder and associated symptoms was underway by 1949 when Tschiassny, in describing sensations of pain associated with noise in Bell’s Palsy, advocated for the use of ‘phonophobia’ (which he defined as hypersensitivity for auditory stimuli) and pointed to other popular terms at the time, such as dysacusis and hyperesthesia acustica [1].

He felt hyperacusis was insufficient for his patients because there was “no increased acuity of the organ of hearing”. In 2014, Tyler, et al, referred to more than a dozen definitions of hyperacusis [2]. Two of these include the term ‘pain’. While numerous other names developed for sound tolerance issues, hyperacusis won out as the dominant name, while phonophobia is common but has come to refer exclusively to the fear of sound (see Figure 1). 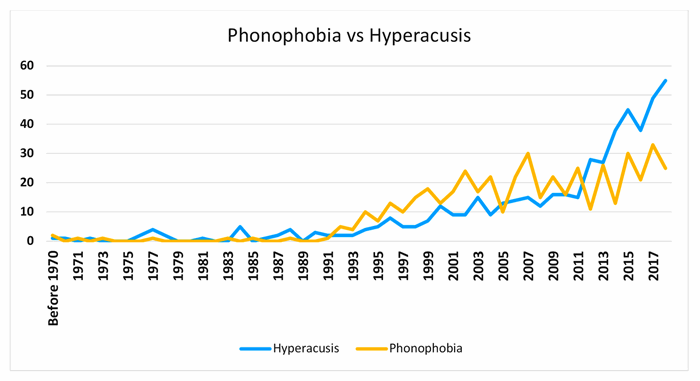 Figure 1. Usage of phonophobia vs. hyperacusis in title/abstract for PubMed from 1970 to present.

The historical use of photophobia to describe light sensitivity provides an interesting parallel. In the 1934 description of photophobia, it was stated that “exposure of the eye to light definitely induces or exacerbates pain” [3]. The ophthalmology field has been very successful in identifying many underlying causes and developing proven treatment approaches, especially for pain from light. It appears that challenging sensory disorders sometimes adopted the suffix ‘-phobia’ in the early discovery phase. It is human instinct to avoid a sensory stimulus that causes pain, so stimulus avoidance became an easily observable characteristic. Tyler’s literature review categorised hyperacusis into four sub-types: loudness, pain, annoyance, and fear [2]. This distinguishes two physically-based components and two emotionally-based components of hyperacusis. Any individual may suffer from any combination of the four. Given the confusion that already exists, the author would advocate for utilising these subtypes while keeping hyperacusis as the primary disorder name.

The actual patient gains no benefit from the nomenclature debate. Today, if someone suddenly experiences problems with noise, they would likely Google ‘loud noise hurts my ears’. Search results show articles such as this 2016 Stat News story, ‘When even soft noises feel like a knife to the eardrums’ [4]. Here, a patient would learn that hyperacusis includes painful sensations in response to everyday sounds. Once diagnosed, the patient with pain may unfortunately get categorised as having only a fear of sound leading to just psychological treatment options. An eye patient with photophobia would not likely experience such limited options.

“When asked, ‘how often does the participant have a setback that makes their condition worse?’, 36% indicated at least weekly.”

At Hyperacusis Research, we have focused on sufferers who experience what may be described as ‘noise-induced pain’. To characterise these patients in detail, we created a registry with the Coordination of Rare Diseases at Sanford (CoRDS), using a 90-question survey. We asked, ‘In the past 12 months, approximately, how often has the participant experienced pain in one or both ears?’ Of the participants, 62% answered ‘every day’ or ‘continuously’ (see Figure 2). Of these, 75% indicated the pain was a direct result of being around a new loud noise. Most sufferers feel the pain immediately. When asked, ‘how long does the pain last?’, respondents indicated the following: 22% – five to 24 hours; 22% – several days; and 11% – several weeks or months.

Figure 2. Frequency of ear pain in participants of Hyperacusis Registry.

An even more significant finding that has historically been neglected is the issue of setbacks from new noise exposures. When asked, ‘how often does the participant have a setback that makes their condition worse?’, 36% indicated at least weekly and only 25% responded with rarely or never. This setback makes the sufferer’s condition ‘moderately worse’ for 50% and ‘worse than it ever was’ for 23%. Figure 3 shows the results for the question, ‘how long does it take for the participant to recover from a setback?” Recovery takes days for 59% and weeks for 24%. Recovery is also proportional to the loudness and/or duration of the impacting noise.

Figure 3. Recovery time from setbacks in participants of Hyperacusis Registry.

Most learn from painful experiences that a key to progress is to minimise setbacks. Clinical advice rarely comprehends setbacks or the risk of making the condition worse. These findings provide key characteristics that need research to understand the underlying mechanisms. Importantly, clinicians should exercise caution at making such ambiguous claims as ‘everyday noise can’t make your condition worse’.

Research on hyperacusis that includes pain has been increasing, as over 33 articles with both hyperacusis and pain have been published since 2000. The research begins by investigating the possible sensory neurons for pain that could be associated with a painful response to loud sounds.

In Tschiassny’s Bell’s Palsy cases, he first attempted to reduce pain by administering a 10% cocaine solution via a Eustachian tube catheter. This abolished the painful response to loud sounds, and he concluded that “the possibility of a psychic factor can be discarded.” For middle ear sources of pain initiated from loud noise exposures, Westcott describes Tonic Tensor Tympani Syndrome (TTTS) as a condition where the reflex threshold for tensor tympani muscle activity is reduced, causing a frequent spasm [5]. Symptoms consist of pain, numbness, burning in and around the ear, aural blockage and tympanic flutter. This year, Norena, et al, described a hypothesis that the tensor tympani muscle (TTM), the trigeminal nerve (TGN), and the trigeminal cervical complex (TCC) play a central role in generating symptoms, including pain [6].

Moving to the inner ear, the cochlea had not previously been viewed as having a pain pathway. Recently, however, Flores, et al, described novel findings for the function of type-II cochlear afferents, which show evidence for the sensation of pain associated with very loud noise [7]. This discovery is described as auditory nociception. Additional research is needed to uncover what might lower the threshold for initiating this pain sensation among hyperacusis patients. At the University of Buffalo, Manohar et al, describe one of many animal models they have developed to research sound aversion and hyperacusis in rats [8]. These models will be critical to test hypothesis for sources of pain.

Finally, many mechanisms of hyperacusis focus on various brain centres that appear to play an important role. While loudness hyperacusis has focused extensively on central gain models, recently Manohar’s team implicated neuroinflammation and microglia activation in the cochlear nucleus as possible contributors to hyperacusis and/or painful sensations following auditory nerve fibre degeneration. It is exciting to see the growing interest and research for hyperacusis with pain. We are at a turning point with fresh insights for sources of pain in hyperacusis. With strong advocacy and research funding, a path is emerging to create a better future for these sufferers. 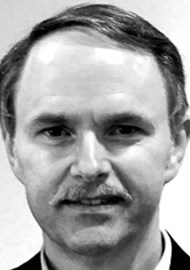