Although experience in the use of airway stents in adults is considerable, their use in children is more recent and more limited. Cláudia Schweiger and Michael J Rutter provide an overview of stents and their use in paediatric airway.

Stenting of the surgically reconstructed airway was introduced in 1956 by Rethi in an effort to prevent the recurrence of tracheal narrowing. Montgomery introduced the T-tube to treat subglottic stenosis in 1965, and Dumon reported the use of silicone stents for airway narrowing in 1990. Since then, several laryngeal and tracheal stents have been introduced, but all of them may cause complications.

Ideally, a stent should conform to the airway contours and exert less than 30mm Hg mucosal pressure. Additionally, a stent should resist compressive forces, sustain airway anatomy, move with the larynx during respiration and deglutition, and be biocompatible [1].

The most common stent in the paediatric airway is the suprastomal stent used in post-laryngotracheal reconstruction (LTR) for airway stenosis. Stenting maintains a lumen and prevents graft prolapse during postoperative healing, and may remain in place for days to months. Longer term stents are advisable when the laryngeal repair is unstable (e.g. when a posterior cricoid split has been performed in an older child without placement of a cartilage graft), or in a recalcitrant larynx that has failed previous reconstruction.

In the trachea, stents are used to treat stenosis as well as malacia and compression. In all these cases, both metal and silicone tracheal stents should only be considered after other options have been exhausted, and complications should be anticipated. Ideally stents should be removed as soon as their therapeutic benefit is no longer being achieved.

The two most common suprastomal stents are the silicone designs of Rutter and of Monnier. T-tubes are still used in some cases, but the Aboulker Teflon stent is no longer available.

Since their introduction, T-tubes have been used for long-term stenting after LTR. Although T-tubes with an outer diameter of 5mm are commercially available, because of the risk of crusting and obstruction we do not routinely place T-tubes with an outer diameter of less than 8mm. An 8mm tube may be placed in a child as young as four years of age. This is an effective device for stenting simple tracheal stenosis; it is not always suitable for stenting reconstructions of the glottis and subglottis [1].

The upper end of a T-tube is generally passed through the vocal cords following LTR. Therefore aspiration is a significant risk, and is expected for two weeks following stent placement. A supraglottic swallow technique is readily achieved by most children, minimising the risk of aspiration. The upper limb of a T-tube may be placed below cord level if the desire is to stent the trachea, not the larynx; however, it should not lie at vocal cord level or in the immediate subglottis as it will incite granulation tissue.

Unlike tracheostomy tubes, T-tubes cannot be easily changed. Meticulous T-tube care is essential, since it is a silicone stent and, like other types of silicone stents, it inhibits mucociliary mechanisms that clear the airway of secretions. T-tubes are well tolerated by the underlying mucosa, but if the upper or lower limbs have been trimmed, then the ‘sharp’ edges may cause granulation tissue.

This is a very hard Teflon stent, which is not recommended to be kept in place more than six weeks after a laryngotracheal reconstruction. With rigid stenting, overlap of the tracheostomy site is potentially disastrous, and the cut distal end of the stent may induce granulation tissue. Because of those issues, we no longer use Teflon rigid stents after airway reconstruction. 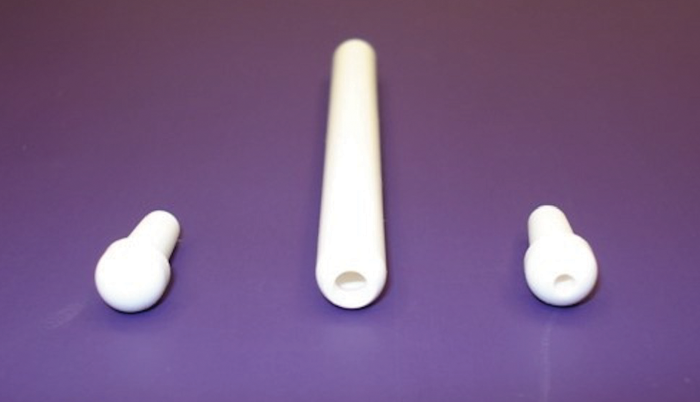 The Rutter stents (Figure 1) are soft and deformable and do not interfere with placement of the tracheostomy tube. They tend to incite less granulation tissue at the distal end of the stent, as the distal end is rounded and smooth. The proximal end of the stent is trimmed to the level of the false vocal cords and then plugged with a rounded cap that is less likely to induce epiglottic granulation tissue. There is a corresponding restriction of speech, as they permit only very limited air passage. While the stent is primarily designed for insertion during LTR, it may also be placed endoscopically. The stent is secured with a Prolene suture passing through the strap muscles on one side of the neck, through the trachea and the stent, and then out the strap muscles on the other side of the neck. The suture is then passed back through a piece of angiocath to prevent the suture cutting through soft tissue, and loosening, and secured with multiple throws to aid in later removal. These soft silastic suprastomal stents are typically placed for four to six weeks, but may be placed for up to six months if required.

This laryngotracheal stent is also made of silicone and, because of its softness, it avoids pressure necrosis at the medial aspect of the arytenoids. The prosthesis exists in 10 different sizes, from 6 to 15mm in outer diameter, and four different lengths for each size. It was created after moulding cadaver larynges and increasing the interarytenoid distance in order to obtain the intralaryngeal contours of a fully abducted larynx. This property is advantageous when treating a subglottic stenosis combined with a posterior glottic stenosis.

The placement of metallic stents was initially hailed as being a safe approach to achieving airway patency in children with tracheomalacia, tracheobronchomalacia, tracheal and bronchial stenoses, and as a palliative treatment for airway tumours. 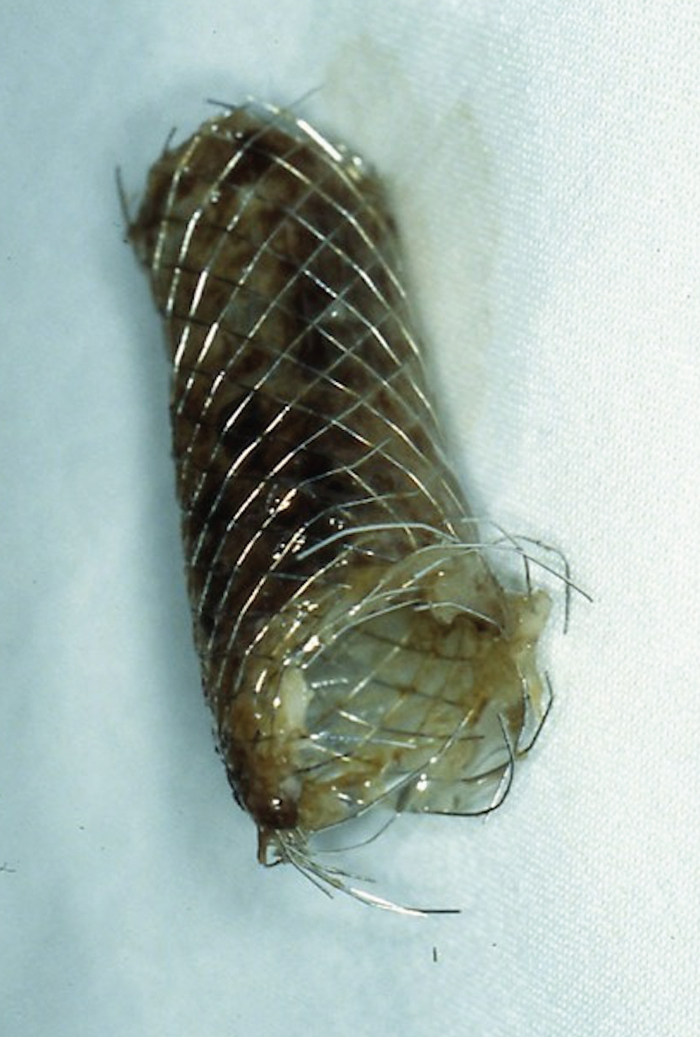 Expandable metal wire stents may permit mucociliary clearance through the stent; however, they have problems associated with stenosis at the end of the stent, granulation tissue formation within the stent, stent migration and fracture, and poor patient tolerance [2]. Additionally, these stents have a strong tendency to become integrated (Figure 2), especially if over-expanded or left for a long period. Some authors consider them as a possible ‘permanent’ stent [3].

The complications metallic stents cause in the paediatric population may supersede the airway compromise that necessitated their initial placement. As such, metallic stent placement should be approached with caution, and should be considered a temporising measure in the management of paediatric airway diseases. The likelihood and the severity of complications increase with time, as do the difficulties encountered upon removal. The proportion of patients in whom metallic stents may be placed ‘permanently’ without complications is not known [2].

Recently, covered self-expanding metal stents were developed as a hybrid of silicone and metal stents. They have a decreased risk of tumour in-growth and granulation tissue formation, except at the ends, which are kept bare for anchoring to the mucosa. This last feature gives them the shared advantage with their uncovered counterparts of decreased migration compared with silicone stents. They are more easily removable than the uncovered stents; however, granulation tissue in-growth at the ends makes them harder to remove than the pure silicone stents. As these stents are relatively recent, their theoretical superiority is still to be demonstrated [3].

Silicone tracheal stents are associated with an entirely different set of problems: primarily stent migration, and secondarily, as the silicone suprastomal stents, biofilm formation within the stent. The latter may cause partial or even complete stent occlusion. They are less prone than metallic ones to induce granulation and may be tolerated for longer. The most common are the Dumon stent (Figure 3) and the Hood stent.

Endotracheal tube as a stent

External tracheal stenting has historically been ineffective or fraught with complications. However, progress is apparent with 3D printed external tracheal scaffolds to support malacic trachea and bronchi [4]. While there has been progress and potential noted, the long-term outcomes are still unknown.

Declaration of competing interests: Dr Rutter designed the ‘Rutter Stent’ which is marketed by Boston Medical Products. He has declined royalties for this product. 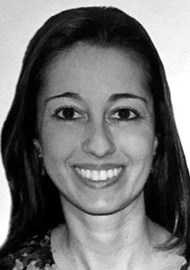 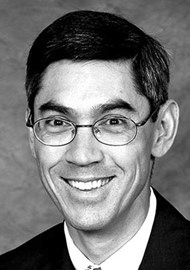