Having written the definitive text on laryngeal nerves, Gregory Randolph and Dipti Kamani describe the benefits of intraoperative neural monitoring and, importantly, how to proceed if the nerve is pathologically involved or there is loss of signal.

Over the years, thyroid surgery has evolved from a basic procedure focused on patient survival to an innovative and graceful modern day operation focused on surgical outcomes, such as voice. In an effort to optimise the postoperative voice outcomes, intraoperative nerve monitoring (IONM) of the recurrent laryngeal nerve (RLN) is increasingly becoming an integral part of thyroid and parathyroid surgery worldwide. Visual identification of the RLN during thyroid surgery is the gold standard.

Sound anatomical knowledge and experience are important tools, IONM is now emerging as a valuable adjunct. As the pathological insights of RLN injuries are better understood, it is recognised that a structurally intact nerve does not necessarily equate to a functional nerve. In thermal, traction or compression injuries, the RLN may structurally remain intact and a functional assessment of the nerve is required to identify an injury.

Technique of IONM and standard guidelines

The International Neural Monitoring Study Group (INMSG) has defined standardised guidelines to the application of IONM [1]. Review of the literature suggests that great variability in the application of neural monitoring exists across different centres. Standardisation of the technique ensures optimum utilisation and comparable outcomes. The INMSG is a multidisciplinary international group of researchers with expertise in the field of neural monitoring as it relates to thyroid and parathyroid surgery [1]. This group has suggested certain standards for IONM, with a primary objective of improving quality of nerve monitoring and achieving comparable outcomes.

“Intraoperative nerve monitoring of the recurrent laryngeal nerve is increasingly becoming an integral part of thyroid and parathyroid surgery worldwide.”

The technique of IONM, set-up of equipment, interpretation of loss of signal (LOS), and troubleshooting during IONM are the major areas addressed by these standards [1]. It is essential to note that application of the IONM system necessitates an anesthesiologist who understands the challenges posed by this technique; muscle relaxation must be minimised / eliminated to optimise IONM.[2]

Loss of signal and its interpretation

Loss of signal (LOS) is defined as no or low (i.e. 100 µV or less) electromyography response after initial satisfactory electrophysiologic response. It is critical to understand the management of an intraoperative LOS when using the IONM system, as LOS can indicate a neural injury or a monitoring system issue. When LOS occurs, the first step is the assessment of the laryngeal twitch with vagal stimulation on that side. The presence of a twitch indicates issues with the recording side of the system while its absence points to a stimulation side problem (see Figure 1). A true LOS strongly suggests a neural injury. Identification of the point of injury can allow the surgeon to guide further management of the injured nerve, as discussed later. 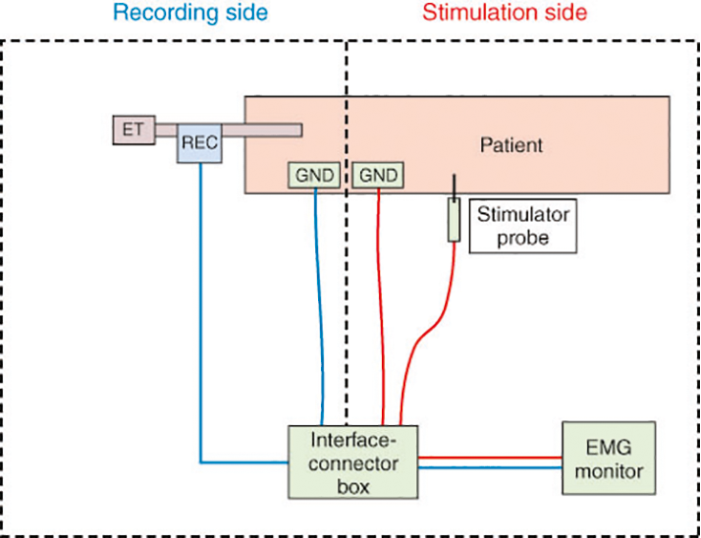 Routine use of IONM during surgery is beneficial to the surgeon in:

Many studies have reported that neural mapping is associated with nerve identification rates between 98% and 100% [1]. The nerve is mapped out through linear stimulation along the paratracheal region, which serves to guide further dissection and visualisation of the nerve.

Insight into pathologic states of the RLN

When IONM reveals significant partial EMG activity in an RLN that is invaded by malignancy and presenting with preoperative vocal cord paralysis (VCP), the surgeon realises the functional consequences of resecting such a nerve. For instance, additional dysphagia and aspiration; postoperatively, the patient should be informed accordingly. Sometimes, surgical management of RLN invaded by tumour can be impacted by intraoperative EMG activity (see Figure 2).

Prognostication of neural function as it relates to intraoperative injury

The most important function of RLN monitoring is its role in the prevention of bilateral VCP. It permits the surgeon to objectively evaluate the functional status of the RLN intraoperatively and allows the surgeon to postpone the contralateral surgery when IONM suggests injury to the RLN on the first side. IONM can also help localise the site of nerve damage. Once the signal is lost, the surgeon can locate the point of injury by stimulating the RLN at the laryngeal entry point and then proceeding proximally to identify the injured segment; segmental injuries are labelled as a type 1 Injury. Sometimes, the whole course of the RLN and the vagus nerve is nonconductive; this is defined as a global nerve injury and is labelled as a type II injury.

The RLN has been shown to branch 34% to 43% of the time in surgical specimens [3]. The motor fibres to the intrinsic muscles of the larynx are contained within the anterior branch with the posterior branch providing sensory function only. Therefore, if a posterior branch is visualised and the anterior branch is not recognised, recurrent laryngeal nerve palsy may result from visual identification alone. The IONM provides the ability to track specifically the motor fibres of the RLN for preservation of postoperative function.

“As the pathological insights of RLN injuries are better understood, it is recognised that a structurally intact nerve does not necessarily equate to a functional nerve.”

The non-recurrent laryngeal nerve (NRLN) is an anatomic variant, more common on the right side. Given its unexpected anatomical course, the NRLN is at a higher risk of injury during thyroidectomy. While preoperative identification of NRLN through imaging studies may be challenging, IONM can serve as a useful tool to prevent inadvertent damage to the NRLN by identifying its presence prior to surgical dissection in the lateral thyroid region. The NRLN can be identified by a novel IONM algorithm that identifies the NRLN by the presence of a positive EMG response with stimulation of the vagus nerve at the level of the superior border of the thyroid cartilage along with the absence of an EMG response to distal vagal stimulation at the level of the inferior border of the fourth tracheal ring (see Figure 3) [4]. 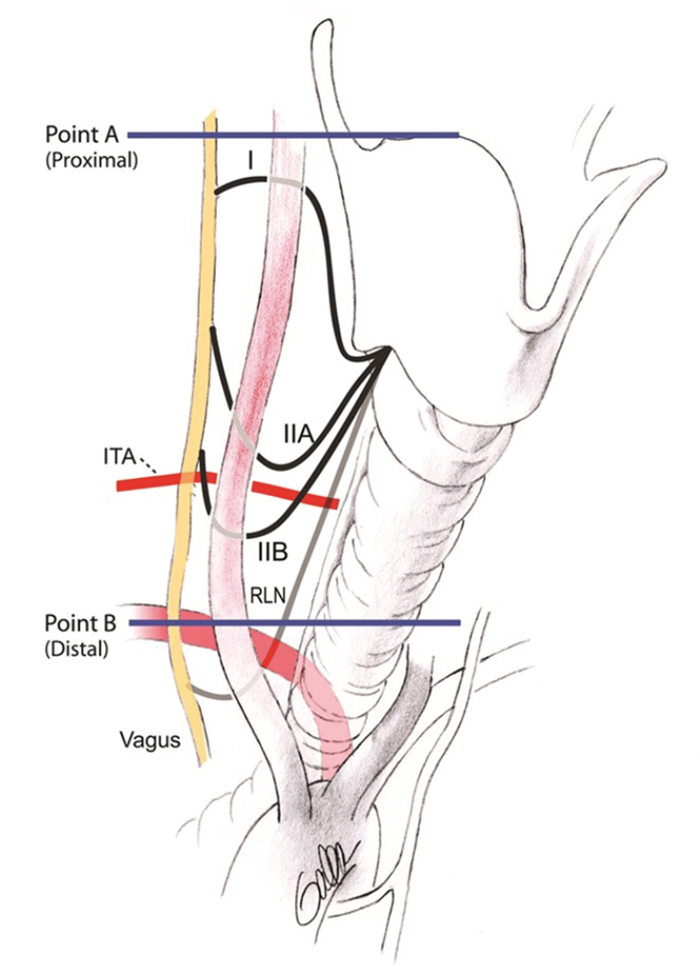 Figure 3: Anatomical types of NRLN (I, IIA and IIB) and IONM algorithm for NRLN detection: The proximal [A] and distal [B] points of vagal stimulation applied for NRLN detection - Point A: at the level of superior border of thyroid cartilage and point B: at the level of inferior border of fourth tracheal ring ITA = Inferior thyroid artery, RLN = Recurrent laryngeal nerve, NRLN = non-recurrent laryngeal.

IONM is starting to be appreciated as a teaching tool during thyroidectomy. IONM application during surgical training enhances the learning curve of the trainees and may allow trainees to perform safer surgery with acceptably low rates of RLN paralysis, similar to experienced surgeons.

Continuous intraoperative nerve monitoring (CIONM) uses a small vagal electrode to stimulate the vagus nerve at low level (1mA) stimulation every six seconds to provide a real-time uninterrupted nerve monitoring which offers an opportunity for detection of impending nerve injury and reversal of associated surgical maneuver to avoid permanent nerve injury. CIONM overcomes the limitation of the traditional IONM which allows the nerve to be at risk in-between the stimulations, thereby identifying the nerve damage only after it takes place [5].

“The most important function of RLN monitoring is its role in the prevention of bilateral VCP.”

The external branch of the superior laryngeal nerve (EBSLN) innervates the cricothyroid muscle, which causes lengthening and tensing of the vocal fold: these are valuable actions for vocal projection and for producing higher pitches of voice. The EBSLN is not always visualised due to its sub-fascial course in about 20% of cases. IONM has been shown to facilitate identification of EBSLN in 100% of cases with quantifiable EMG responses recorded in all cases. In 2013, the INMSG published guidelines for EBSLN neuromonitoring during thyroid and parathyroid surgery [6]. The significance of EBSLN preservation is growing in not only singers, but in all patients, yet the nerve is still known as the ‘nerve of Galli-Curci’, after the famous soprano Amelita Galli-Curci whose career allegedly ended after likely injury to the EBSLN during thyroid surgery.

IONM is a valuable adjunct to the gold standard of visual identification of the recurrent laryngeal nerve, as a structurally intact nerve does not necessarily equate to a functional nerve. The routine use of IONM augments its application during difficult surgeries and using IONM in a standardised manner is vital to its optimal application.

Declaration of competing interest: none declared. 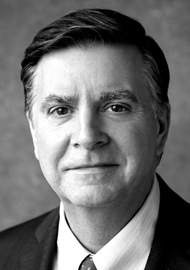 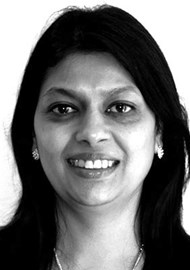