Alexander Pope said that “to err is human”, but medical errors can have serious consequences. How can better communication minimise the risk of them occurring in the first place? Allowing all members of the surgical team to feel empowered to speak up is an important first step.

Errors that are potentially harmful to patients have often occurred through a lack of communication in clinical teams. The ability to challenge colleagues in authority when something does not seem quite right, or is clearly wrong, is so important. Lowering these authority gradients is not only good for patient safety, but also enhances team working.

Historically, there have been steep hierarchal gradients across many healthcare professions. While times are thankfully changing, negative behavioural aspects in healthcare can compromise patient care and be potentially damaging to other team members, especially if staff lack candour and insight into their own attitudes.

One in 20 hospital admissions have some form of error and, of these, one in 400 are serious [1]. The operating theatre can be a stressful environment and many serious errors occur in surgery, intensive care or through prescription mistakes [1]. The 2001 Kennedy inquiry of cardiac surgery at the Bristol Royal Infirmary, UK, identified how some clinicians lacked insight about their behaviour, with a significant imbalance of power between them and other staff. This resulted in steep hierarchy and authority gradients associated with increased risk to patient safety, not to mention the detrimental effects on team morale. Conversely, a flat hierarchal gradient at senior level, where the team leader shows a lack of leadership and is constantly unsure with poor self-confidence, can be equally damaging, as no one knows quite what is happening. Individuals who demonstrate both steep and flat authority gradient behaviour are often seen as poor leaders and role models by their teams. 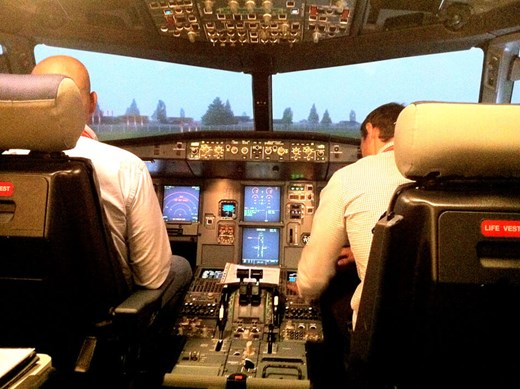 Figure 1. On modern commercial airlines, a shallow authority gradient ensures a junior first officer can
challenge the most senior captain without fear. This practice also needs to be adopted across healthcare.

Many factors can affect team hierarchy, including profession, gender, personality traits (introvert or extrovert, passive or aggressive), being educated outside of the country of practice, increased responsibility, and inter- and intra-professional rivalry. In some healthcare systems, nursing staff are unfortunately seen by some as being subservient to doctors, immediately creating a potentially steep hierarchal gradient. By actively lowering hierarchy, effective communication is enhanced between doctors and nurses leading to better patient care [2]. Regular use of the expression ‘there is no I in team’ focuses attention on the importance of good team working and the role individuals have in this setting. Steep hierarchies between senior staff and teams can also have a negative impact on working relationships and a tendency for conflict avoidance, which could potentially compromise patient safety.

“Challenging authority gradients, whether due to a perceived or real risk to patient safety, should not be detrimental to either the challenger(s) or those they are questioning”

Surprisingly, some still feel that steep hierarchy is a ubiquitous part of healthcare. In most cases, steep gradients are certainly not conducive to good team working. However, at safety-critical times when team leaders have to quickly take control (for example in the case of a major surgical bleed), a temporary and rapid change in authority gradient may be both necessary and important for team dynamics and patient safety. Teams should know who is ultimately responsible for patients under their care, but situations requiring a steep hierarchy should be limited.

Challenging authority gradients, whether due to a perceived or real risk to patient safety, should not be detrimental to either the challenger(s) or those they are questioning. It is important to adopt a just culture in healthcare where causes of error are investigated by asking system failure questions like ‘why did this happen?’ instead of ‘who was responsible?’. Most colleagues do not go to work with the intent to cause harm to patients. A just culture is not the same as a no-blame culture but ensures that individuals are accountable for their own actions when clearly negligent or acting with gross misconduct. A just culture should help empower any team member to speak up if they have concerns [3].

Healthcare can learn from other high-reliability organisations (HRO) including aviation. While these cannot be directly compared, commercial aviation has come a long way from its days of steep hierarchy [4]. The most junior member of the crew can now challenge the most senior captain without fear of retribution if they have any concerns about flight safety.

Recognising the importance of a regular team brief before an operating list, including personal introductions and a crucial phrase that ‘anyone can and should speak up if there are any concerns without fear of retribution’ is a great way to actively lower authority gradients. This is important, particularly for new team members, and should be reinforced throughout the day. Similarly, empowering and valuing others by asking more junior team members to lead the briefing can be invaluable.

“Reducing team hierarchy not only enhances patient safety, but it aids team working and morale”

When something does not quite go to plan, it is good practice not to shout, raise voices, avoid or ignore issues that have been raised. If possible, the best way to deal with such situations is to stop (if safe to do so) and thank the team member for raising the concern. The issue can then be considered in a calm and considered way with the input of the team as necessary [5]. Many issues can arise from poor communication, unprofessionalism or rudeness towards colleagues. 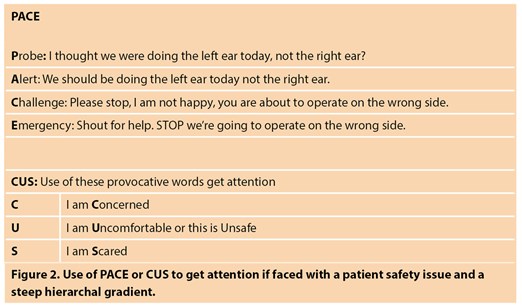 In situations where a team member recognises a potential problem but another does not, the acronym PACE can be useful (Figure 2). The first stage, Probe, gives colleagues a relatively easy ‘get out’ reply such as ‘yes of course you are right. Sorry, how silly of me.’ If the individual does not accept there is a problem, progress using Alert, Challenge or calling an Emergency. On rare occasions, calling an emergency might even be the first thing to do.

Specific words can also be crucial when attracting the attention of a team member who maintains steep hierarchy, especially if there are potential patient safety issues. The mnemonic CUS: Concerned, Uncomfortable, Scared was created by United Airlines for their crew but can readily be applied to healthcare (Figure 2). These words are increasingly provocative and usually get heard and understood regardless of gradient.

In summary, reducing team hierarchy not only enhances patient safety, but it aids team working and morale. Being kind and respecting every team member is so important, whoever they are.

The ENT & Audiology News team would like to offer hearty congratulations to Peter Brennan who won the 2022 Swann-Morton Silver Scalpel award in March for his dedication to surgical trainees. 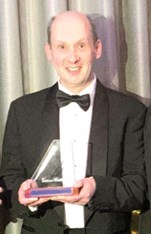 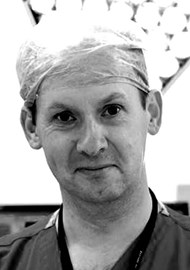 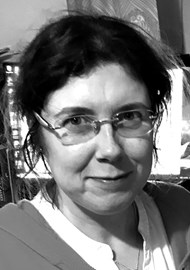