Rhinology: what does the future hold?
By David W Kennedy

David Kennedy surveys the past, the present and the future of rhinology practice and research.

An evolution of understanding in rhinology

However, despite the rapid growth in research within this field, and the high frequency with which it occurs in the general population (10 to 15% in Europe and the United States), chronic rhinosinusitis remains today a syndrome that is both poorly defined and poorly understood.

However, comparing our current body of knowledge regarding pathogenesis and management to what was understood in the 1970s, we have indeed come a long way. At that point in time, it was widely believed that chronic rhinosinusitis was primarily a bacterial infection, and when it did not respond to antibiotics, it was best treated by stripping all of the involved ‘irreversible’ mucosa. Only Naumann, Proctor, Dretner and Messerklinger were talking about the concepts of the ostiomeatal complex at that point in time. During the subsequent evolution and the early years of endoscopic sinus surgery, the ostiomeatal complex became overemphasised, sometimes being promoted as the underlying cause, rather than just the final common pathway, in chronic rhinosinusitis (CRS).

Defining the diseases within the syndrome of chronic rhinosinusitis

Although much remains to be done, we have significantly refined our understanding of the multifactorial nature of this broad syndrome that we know today as CRS. We recognise that it represents a broad spectrum of diseases, and that the classification into polypoid and non-polypoid CRS is unsatisfactory. Moving forwards, a key priority within rhinology is to better classify the different entities which make up the syndrome so that we can move towards more personalised therapeutic approaches.

“A key priority within rhinology is to better classify the different entities which make up the syndrome so that we can move towards more personalised therapeutic approaches.”

With the potential for an increasing number of nonsteroidal anti-inflammatory agents, and a variety of monoclonal antibodies with potential in eosinophilic disease, this becomes increasingly important. Cytokine cluster analysis has already revealed several different apparent subtypes and this work, along with genetic and more precise phenotype classifications, remains a prime research focus for the near future [1].

Obtaining a better understanding of which organisms within the microbiome are helpful in maintaining sinus health, and which organisms are disruptive, are important goals and such research opens up exciting therapeutic opportunities. At this point in time, it has been suggested that Lactobacillus sakei may be one of the organisms associated with sinus health, but much work needs to be done before we really grasp the role of the sinus microbiome and the potential for naso-sinus probiotics in the years ahead. 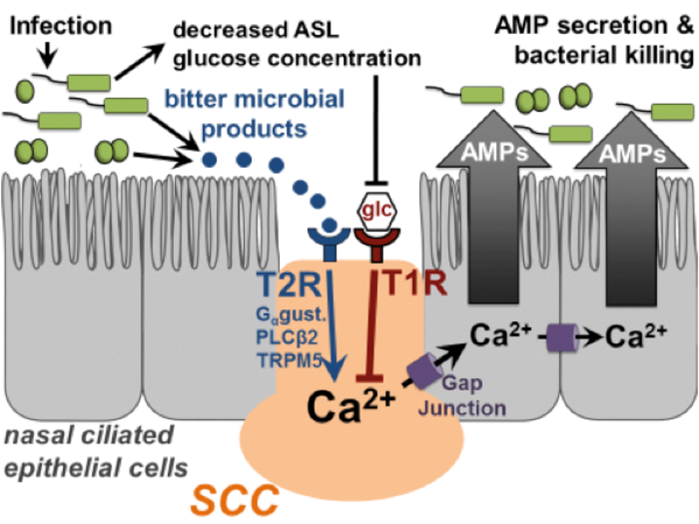 Advances in the genetics of rhinosinusitis

While the genetics and epigenetics associated with CRS remain very complex, a significant advance has been made in recent years with the discovery of the T2R 38 bitter taste receptors (T2Rs) within the human nose and their role in newly identified local defence mechanisms. This discovery has garnered significant attention in the scientific community [3] (Figure 1). Specifically, the presence of the T2R 38 taste receptor is a Mendelian dominant trait, and has been demonstrated to have a significant protective effect against non-polypoid CRS [4].

The therapeutic role of topical therapies in CRS continues to advance. The use of high dose, high volume topical steroid irrigations, although off-label, has become widespread and has already led many to adopt an additional role for sinus surgery, namely as an access for topical therapies. Although expensive, the use of biodegradable mometasone eluting implants has also become widely accepted within the US and reduces the compliance and access questions associated with other topical therapies. 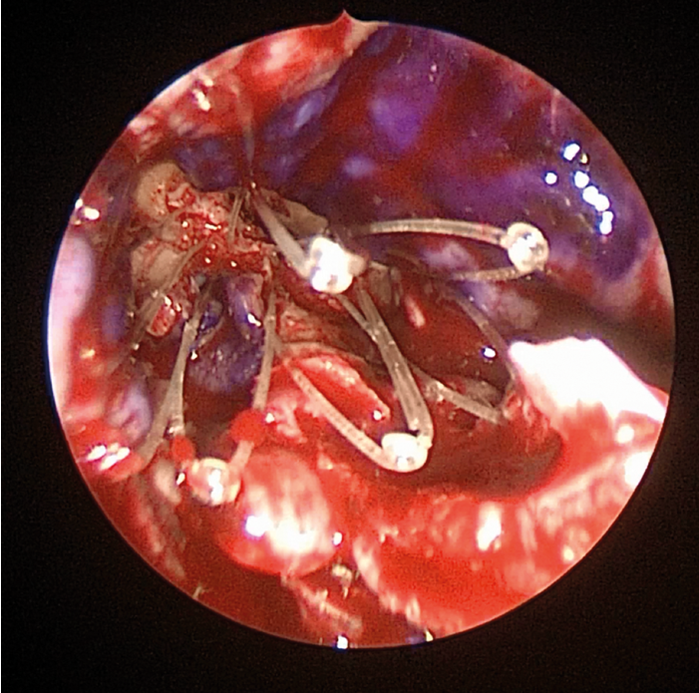 Figure 2. Placement of a Propel* implant in a Draf 3 frontal sinusotomy. An extended midline frontal sinusotomy has been performed and mucosal grafts placed over the exposed bone (mucosal surface of grafts stained with methylene blue). The implant will now be teased out so that it lies in firm contact with the grafts and, as well as eluting mometasone, it will hold the grafts in place. (* IntersectENT, Menlo Park, CA).

Such implants may also obviate one concern regarding balloon technologies in the future – namely that they do not provide for topical anti-inflammatory therapy (Figure 2). Additional drug eluting implants are currently being studied and, moving forwards, it is likely that steroids will eventually be only the first of many such topical medications incorporated into implants for the management of CRS. Moreover, additional routes for the provision of topical solutions the critical anterior ethmoid-frontal recess region within the sinuses, namely with a lacrimal diversion device enabling the use of eye drops, are currently in clinical trials.

“What if the nose could also be used to provide medical therapies for Parkinson’s disease, Alzheimer’s and other neurodegenerative disorders?”

For patients with severe recalcitrant CRS, several monoclonal antibodies previously approved for the management of asthma are now under clinical trials for eosinophilic disease. At the same time, while medical therapies continue to progress, the evolution towards minimally invasive technologies also continues, moves towards the office setting, and is enhanced by new image guidance technologies and the future potential for removal of inflamed tissue and the application of topical therapeutics with balloon type minimally invasive procedreus. The ubiquitous nature of CRS, and its broad and previously largely under estimated impact on many aspects of overall quality of life, ensure that the field of rhinosinusitis will remain an exciting field of research and innovation in the years ahead. 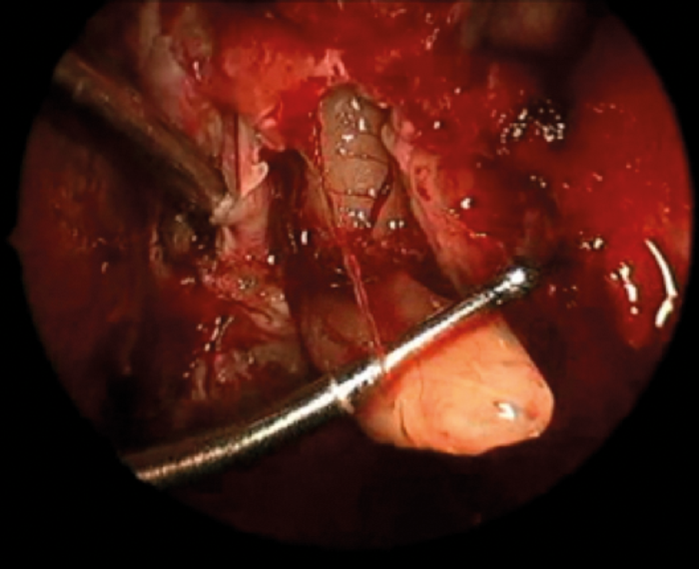 Figure 3. Intraoperative endoscopic view of delivery of the olfactory bulb prior to resection during removal of an olfactory neuroblastoma. The inferior surface of the frontal lobe can be visualised superiorly.

The nose as an intracranial corridor

While the nose has long been used for access to pituitary lesions, the excellent visualisation provided by endoscopic techniques combined with the ability to close skull base defects with high success rates, led to the concepts of transnasal approaches to the anterior, middle and posterior fossas (Figure 3). The desirability of avoiding brain retraction and the reduced morbidity associated with transnasal approaches has now led to the widespread adoption of transnasal intracranial access and the variety of lesions accessed through these approaches continues to grow. 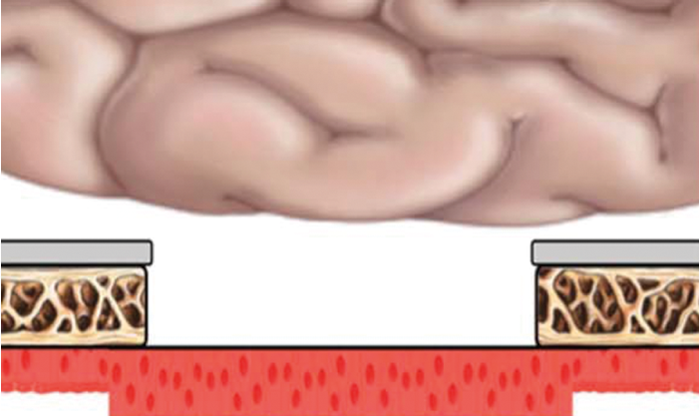 Figure 4. Illustration demonstrating the skull base. In the normal state (top picture) the dura creates a blood brain barrier which precludes molecules larger than 500Da from entering intracranially. In bottom picture, the dura and skull base has been removed, and molecules can now pass through to the dura. The effective delivery of glial-derived neurotrophic factor (GDNF) has been effectively demonstrated in mice. Modified from [5].

However, the potential to use the nose as a way of intracranial drug delivery is only just starting. What if the nose could also be used to provide medical therapies for Parkinson’s disease, Alzheimer’s and other neurodegenerative disorders? The concept of working around the blood brain barrier by dural removal and skull base flap coverage is currently under investigation and certainly holds exciting potential [5] (Figure 4). One can certainly imagine intranasal drug eluting implants providing intracranial therapeutic medications across a mucosal flap or perhaps even by olfactory uptake.

Declaration of competing interests: David Kennedy is a consultant for IntersectENT, makers of the Propel implants, and Sinopsys, makers of a lacrimal diversion device. 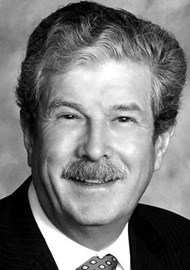