In a previous article, we looked at some interesting legends surrounding patron saints of the ear and hearing [1]. As we celebrate the Feast Day of St Blaise of Sebastia on 3 February, we hear some fascinating tales and myths about the patron saint of the throat.

According to tradition, Blaise was born of noble birth in Cappadochia where Christianity had been adopted as the official religion around AD 300. The Romans, however, once again started to persecute Armenian Christians. Blaise heard a message from God telling him to flee to the hills where (like St Mamas, patron of the ear) he lived in a cave as a hermit in solitude and prayer.

Legend has it that he made friends with the wild animals and that a group of hunters hunting lions for the Roman amphitheatre found the bishop kneeling in prayer, surrounded by patiently attendant wolves, lions and bears. They seized Blaise and carried him off to Agricola, the governor of Cappadochia. On their way, however, they encountered a woman whose pig was about to be seized by a wolf; St Blaise commanded the wolf to release the pig, and it was freed unhurt. The old lady, grateful for the timely release of her pig, later visited Blaise in prison carrying him candles to ease his incarceration and so that he would be able to read the scriptures in his cell. Some versions say that whilst on his way to gaol and others say whilst actually in prison, a mother came with her young son who had a fish bone lodged in his throat. At Blaise’s command the child was able to cough up the bone. 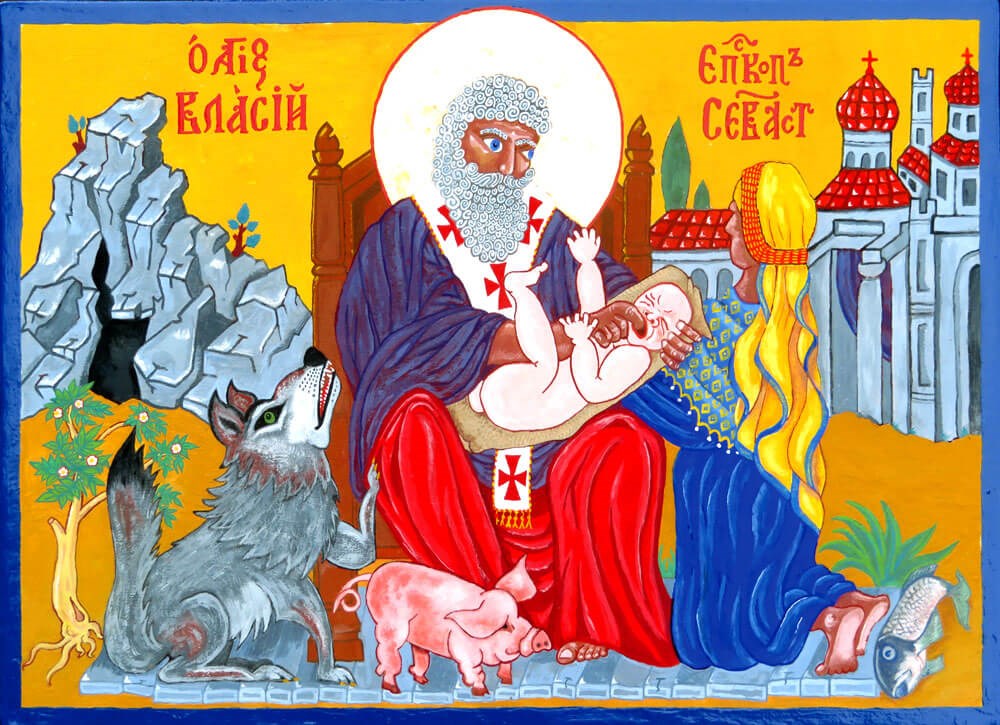 Contemporary icon of St Blaise, showing Bishop Blaise removing a fishbone from a baby’s throat; the wolf and
pig; a cave; Sebastia Cathedral and a white rose for Yorkshire (Painting by John Riddington Young).

At his trial, the governor tried to persuade Blaise to renounce his Christian faith. Blaise of course piously refused, and he was thrashed. He still would not recant and was then hung from a tree, and his flesh pulled from his bones with rakes or iron combs, which resembled wool combs. Finally, he was beheaded [2,3].

As a result of different subplots in this legend, Blaise not only became patron of the throat, but also for wild animals (and later veterinary surgeons) and wool workers, owing to the method that St Blaise was martyred, with a wool comb. His cult began to spread from the eighth century and had become widespread in Europe in the 11th and 12th centuries. He became patron of the kingdom of Armenia. In 1222, manual labour was banned in England on Blaise’s feast day. There is a village in Cornwall called Saint Blazey and in Kent, there is the healing well of St Blaise. Churches and schools abound particularly in wool producing areas. He is patron saint of Yorkshire.

San Blas has lent his name to many places in Spain and South America. Longfellow’s last poem, The Bells of San Blas, refers to a church in Mexico. He is the patron saint of Paraguay and also the island of Madeira. There are several towns in Portugal and Brazil named after him, where he is called São Brás. In Italy, he is the national patron saint and known as San Biagio. Italians claim to hold many of his ‘true relics,’ including his body, which was rescued after a shipwreck and is kept in a marble sarcophagus at Maratea. In St Blaise’s Church in Rome is a bone allegedly from his throat.

Nowhere, however, reveres St Blaise (Sveti Vlaho) more than Dubrovnik, where he has been venerated as patron saint from the 10th century. He is alleged to have saved the city from Venetian invaders. The imperialist Venetians in AD 971 anchored their fleet offshore and asked Dubrovnik for victuals, assuring them that they would leave after purchasing supplies. This was a ruse, however, enabling them to reconnoitre Dubrovnik’s defences. That night, an Albanian called Stojko described another visitor; an old grey-haired man with a long beard, a bishop’s cap and a stick in his hand. He named himself Vlaho (Blaise) and disclosed the Venetian plan. Stojko sounded the alarm and Blaise saved the city [4].

The Assumption Cathedral Church in Dubrovnik acquired the head as a holy relic of the saint in 1026. Other saintly relics include Blaise’s right hand, foot and voice box. The Reliquary of the Throat contains his larynx, visible through a crystal window. 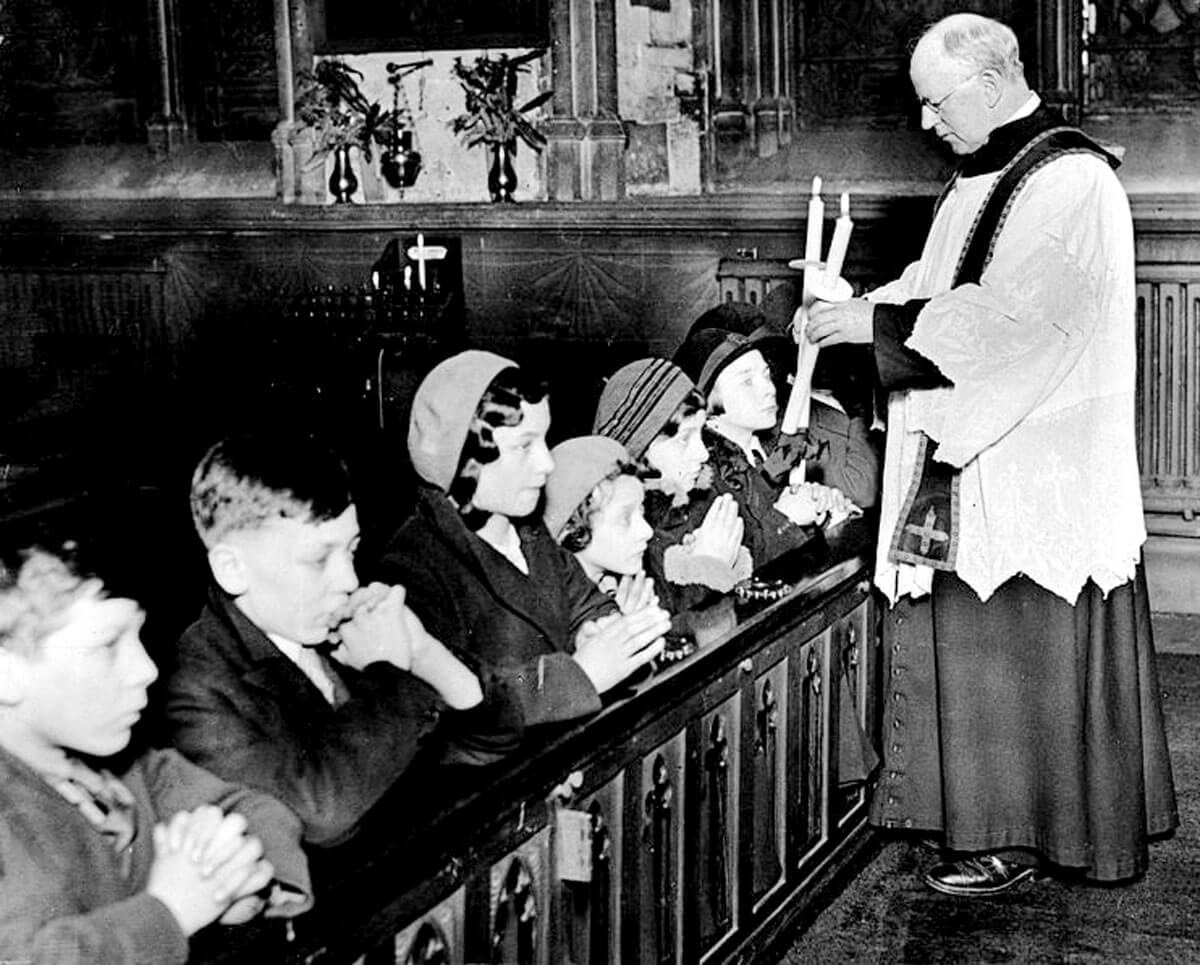 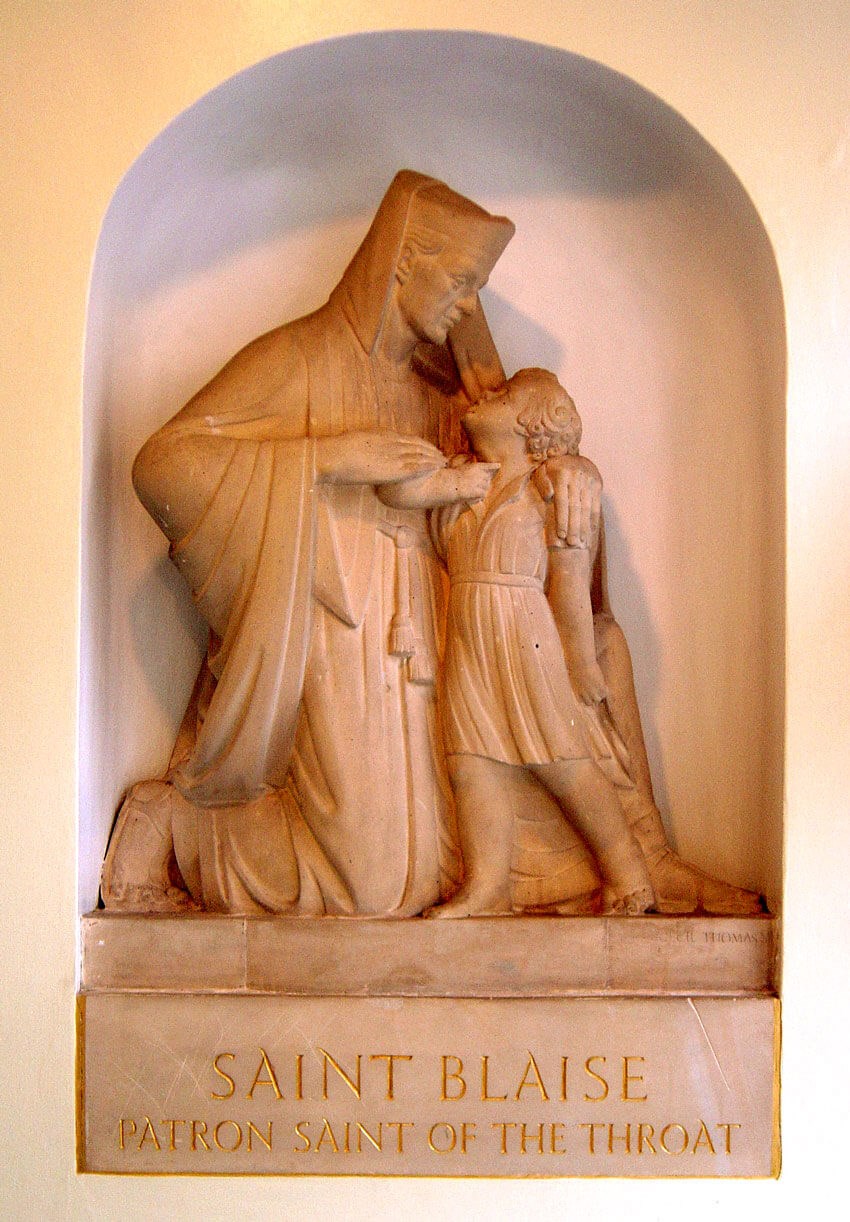 A statue of St Blaise, which was in the lobby of the Royal National
Throat Nose and Ear Hospital until it closed in October 2019.

The celebrations every year on his feast day (3rd February) are phenomenal. They begin the day before, when white doves are released from the cathedral steps and Saint Blaise’s banner is raised on Orlando’s column. Early next morning, the crowds descend on the city and gather at its gates, arriving from the villages with their homemade banners and embroidered silk costumes. Gunfire starts the show as the musketeers, in their scarlet berets and sashes, fire their ancient guns in the street. Some semblance of order is attempted by the officials, elected the previous evening from the local ranks of sea captains and craftsmen. They are resplendent in their dark suits, coats and hats, with white gloves and bow ties. Then the visitors from the parishes file into the walled city of Dubrovnik through the Pile Gate, pausing to lower their flags three times before the statue of St Blaise. After a special mass outside the cathedral, St Blaise’s relics are perambulated through town with people trying to touch the saint’s head. One reporter said that he “saw a priest holding aloft the saint’s right arm and waving it in the air as if it were a football trophy rather than a precious reliquary adorned with gold filigree and pearls” [5].

In other countries, the Blessing of St Blaise is still widely practised on 3rd February. Two candles are consecrated and then touched by the priest to the throats of the supplicants. The celebrant then intones: “Through the intercession of Saint Blaise, bishop and martyr, may God deliver you from every disease of the throat and from every other illness”. Many of my Irish colleagues can remember having their throats blessed in this manner as children (and carrying a red scarf or ribbon to the church to tie around the neck.)

There are different national variations in this ritual. In Germany and in other places, the blessing of throats is given with lighted candles. In Rome, the blessing is given with the relic in a crystal placed on a large ring, pressed against the throat. In Spain and Mexico, the red ribbon is given to be worn around the neck for the nine days following the blessing. In the Armenian Catholic Church, the neck is anointed with oil on a cotton swab.

In the Pyrenees, Basques bring garlic, salt, apples, and chocolates to the church for Saint Blaise’s blessing. These are then given to their children and their animals as protection against throat ailments. The Basque dish for this festival is ‘loukinkas,’ a very hot (peppery) regional sausage. After giving themselves a tingling numbness in their throat with a loukinkas, they traditionally follow it with a cool fresh raw oyster to take away ‘the burn’.

Other German traditions are trachea-shaped loaves of bread (Blasiusbrot) along with puffy fried bread pastries shaped like short trousers (Bubenschenkel). In Rothenburg, horses were blessed on ‘Blasiustag’. A bronze comb was then attached to the blessed horse’s ear. Latterly, the more religious farmers would have had their tractors blessed.