The outer ear in the visual arts
By Albert Mudry

The ear is an exceptional organ, and quite rightly takes its place in the visual arts, as described by Albert Mudry, who takes us on a whistle-stop tour of the appearance of the ear and its depictions in art throughout the ages.

In truth, visual art does not exist in its own right; there are only art objects, such as the auricle, and therefore artists. Permanently open to the external world, the ear is an organ of exception, the external part of which presents a fascinating form marked by unlimited variations, rendering it quite unique. Its shape, size and position on the face play a key role in facial harmony. Most people like to find in an object of art what they like in reality. Depending on how the auricle is viewed, it is associated not only with the pleasure to observe and admire it, but also with various other interests.

Anthropologists use it to differentiate certain races, psychologists use it as a possible indicator of certain character traits, and criminologists use it as a method of reporting and identification. Generally, all auricular features steadily increase in size with age until adulthood. The ear lobule continues to elongate with age, thus the auricle is considered the only organ which continuously grows throughout one’s lifetime. Furthermore, the lobule undergoes rapid elongation after 60 years of age, generating the modification of law enforcement agencies to update their data on the external ear while using it as a biometric tool. Despite this individual diversity, a lot of artists unconsciously tend to portray different people with relatively similar auricles, as described by the Italian art historian, Giovanni Morelli, in the 19th century. With his precise analysis of auricles, Morelli was able to answer the question of origin of many unknown pictures and also to clarify whether a picture was an original painting or a copy.

“The ear is an organ of exception, the external part of which presents a fascinating form marked by unlimited variations, rendering it quite unique”

Another interesting point is that, despite the unique and differing shapes of the pinna, one can always recognise the shape of an auricle and the ear can look like a question mark. The aim of this article is to present a short overview of the artistic representation of the normal auricle and its possible function through the centuries. The perception that we have of an artistic work is random. It depends as much or more on the time in which we look at it and on what we expect it to give us, than on the period in which it was executed. Any art object is first of all an object. There are always several possible readings of the same work.

For more than 10,000 years, the artist has portrayed the ear auricle in sculptures and paintings, even if the description of the main function of the ear - hearing - is not simple because it is not visual. The classical way to represent it is to depict a person with a hand held behind the ear, as seen in one painting by Sir Joshua Reynolds, or a person holding a hearing trumpet. The auricle first represents the ‘door’ through which the divine wisdom accesses the human dimension. The concept of reproduction through the ear is a good paradigm. It can be divided into the impregnation or ‘concepto per aurem’ and the delivery through the ear.

The most well-known example is the mystery of the conception of Jesus by Mary in Christian faith; various paintings represent this conception, notably by a small bird ‘speaking’ into Mary’s ear or by a tube joining the mouth of God and Mary’s ear. Another example is the conception of Hanouman, king of the monkeys in Hindu mythology. The delivery through the ear is particularly discussed in Rabelais’ writings, which described the birth of Gargantua by Gargamelle’s left ear, or in Molière’s writings when Arnolphe claimed that the innocent Agnès enquired whether children were born by the ear. 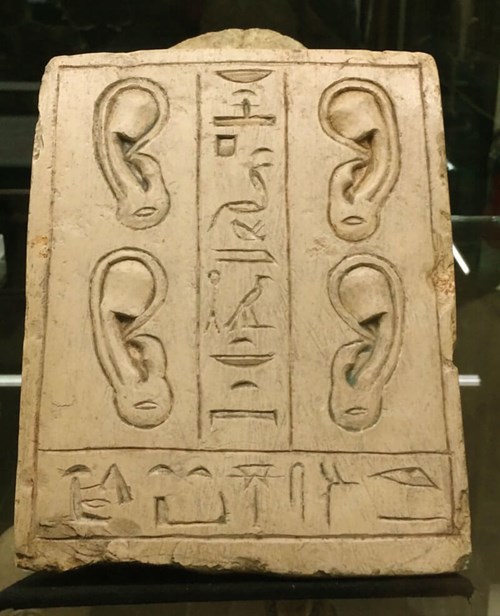 In ancient Egypt, three main ear functions are recognised and depicted: hearing, meditation while in prayer, and decoration as a support for earrings. Meditation while in prayer was very popular at that time, which explains the numerous stelae found in various museums (Figure 1). Votive ear, ear amulets and painted reliefs were also discovered, notably in funeral inscriptions. Votive ears became popular during the Greco-Roman period. They were presented to a god, either in the hope of a cure, in request of grace, or as thanks for a wish granted. They were made in the shape of the afflicted body part – in this case, a person’s ears. They may have been experiencing deafness or infection. Made from bronze, the ears are now coated with chemical compounds formed from corrosion (called bronze disease), which gives them their green appearance. The use of bronze may indicate a wealthy owner, as most votives were made from terracotta (Figure 2). 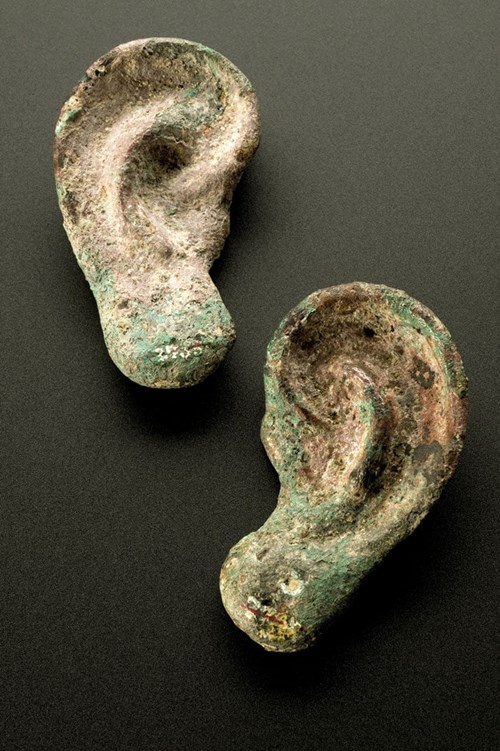 They came to be known also as ex-voto. Initially fought by the church during the High Middle Age, the deposit of ex-votos would be standardised without being attached to any official liturgical exercise. Made with different materials, they were used until the 20th century and represent a source of information on material culture. 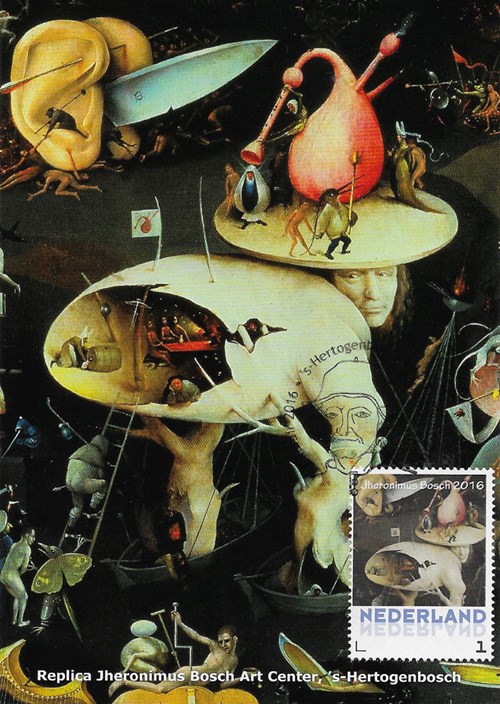 At the beginning of the 16th century, and in his The Garden of Earthly Delights, Hieronymus Bosch created one the most well-known ear depictions in history: a pair of human ears pierced by an arrow and brandishing a blade (Figure 3). In addition, a little devil pushes a needle into the root of the helix of one of the ears. It is the only auricle painted by Bosch to have a rectangular form. Bosch of course gives no details and, as one might expect, its interpretation has given rise to much speculation. Is it an allegory of medieval symbolism? Are these the tortures one might expect in Hell? Might it be indicative of man’s deafness to the New Testament exhortation: “If any man has ears to listen, let him hear”? Does it have a phallic connotation, or symbolise a castration act? Or is it even a weapon of war? The two ears have definite resonance with wheels and the blade of the knife to the barrel of a cannon.

Associated with an eye, a carved ear auricle is found on the top side of the Vedette Watchtower at the tip of the Grand Harbor peninsula in Valletta, Malta. This tower and several others were constructed by the order of St John at strategic points along the bastions. It symbolises watchfulness, the ear representing the need to listen for uncommon or unusual sounds which could be related to the approach of potential enemies. With the development of modern communication, notably with the invention of the telephone in the last part of the 19th century and radio telecommunication in the first part of the 20th century, the auricle is regularly used to illustrate and highlight these ways of communication, as exemplified on different postage stamps. As a metaphor, a big auricle is better able to hear and hear farther than a small ear. 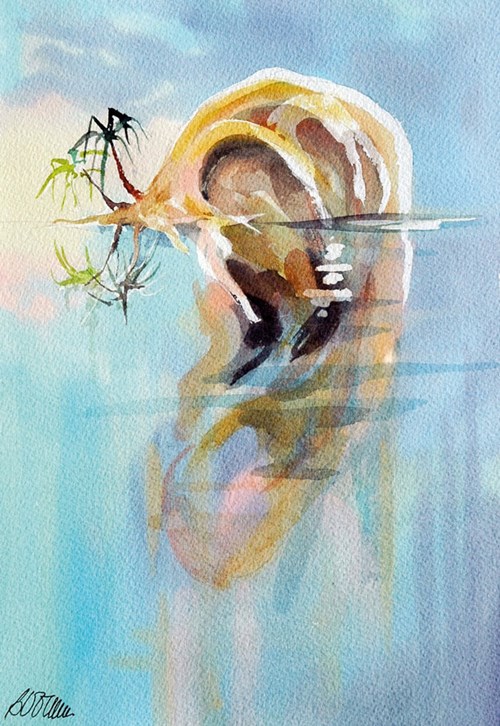 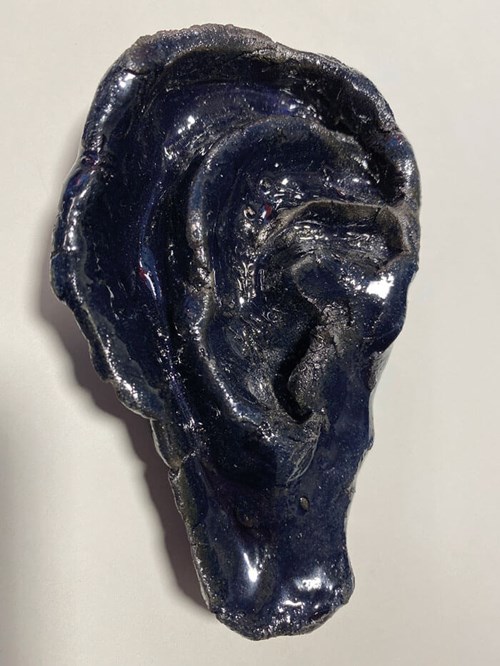 Figure 5. Ceramic sculpture of an ear by an anonymous, 2018. Author’s collection. 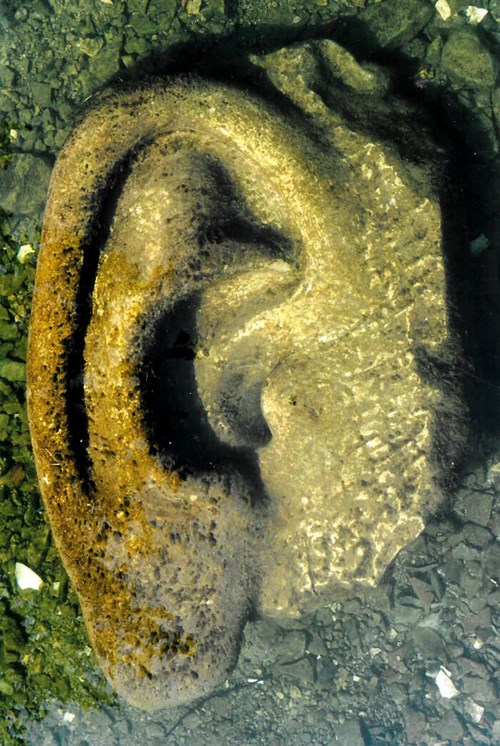 Figure 6. Ear sculpture by Walter Mangold immersed in the water of the Sorgue river in Vaucluse.
This ear is listening to the poems of René Char who sang so well the river.
Author’s colleague’s photography.

In the second part of the 20th century, the ear auricle became more and more an object of art in itself (Kesser). Regularly, artists produced such objects of art, as exemplified by a watercolor by Bernard Völlmy (Figure 4), a ceramics sculpture, anonymous (Figure 5), and an ear sculpture by Walter Mangold immersed in the Sorgue River in Vaucluse (Figure 6). 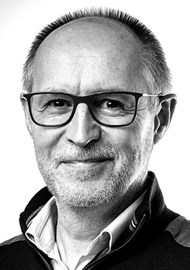