Surgical simulation provides an opportunity for trainees to practise procedures in a safe, controlled environment without risk to patients. Anatomical simulation is most often used for replicating common surgical scenarios, though it also has a potential benefit in exposing surgical trainees to rarer procedures that a surgeon may be less likely to encounter. Although these procedures may be simple once learnt, prior exposure can be beneficial, especially when operating in unfamiliar territory, such as the periorbita for otolaryngologists accustomed to operating strictly within the ear, nose or throat.

In our third year at Manchester Medical School we had the opportunity to work with Sadie Khwaja (ENT Consultant) and Patricia Healy (Prosthetics Engineer) on a project to develop anatomical models to simulate endoscopic anterior ethmoidal artery (AEA) ligation and sub-periosteal orbital abscess (SPOA) draining. Cases of epistaxis attributed to the AEA that are not manageable medically may require surgical intervention with AEA ligation. A case of orbital cellulitis may result in the development of a SPOA requiring surgical drainage. If left untreated, both can have detrimental effects, and an incorrect manoeuvre in such close proximity to the optic nerve could lead to irreversible blindness.

Over the course of 10 weeks, 20 anatomical models were built for each procedure. Their benefit to a training ENT surgeon was assessed through the use of each procedure as an objective structured clinical examination (OSCE) station. Each model was comprised of half a skull cast from plaster combined with rubber soft tissue components: skin, orbit, rectus muscles, periorbita and periorbital fat. A custard-filled water balloon was used to replicate the abscess, and electrical wire used for the ethmoidal arteries, inserted at their often-cited distances 24mm then 12mm posterior to the lacrimal crest. The estimated cost of each model was £10 in materials, though this does not account for the construction.

In May 2018, the annual North-West formative ENT OSCE took place in which 15 ENT trainees undertook 28-minute OSCE stations. SPOA drainage and AEA ligation were used for two stations and following the assessment, feedback forms were given to assess the anatomical models.

Of those that used the SPOA model, 80% liked the anatomy of the model, 60% felt more confident to drain a SPOA on patients and 60% thought the model increased their anatomical knowledge. The majority of the surgeons using the epistaxis model were carrying out the procedure for their first time, highlighting its rarity in practice. Similarly to the SPOA model, the accuracy of the anatomy and likeness to human tissue were both ranked highly (means of 5 and 4.93 respectively on a Likert scale of 1-7), and the majority of surgeons supported the hypothesis that the model would provide a benefit to their ability to carry out the procedure (5.53 on a Likert scale of 1-7).

Owing to the positive response to the model at the NOEENT conference, we hope to present our results nationally and publish all the results.

We would like to thank the NOEENT committee in supporting our project via the education research fund. 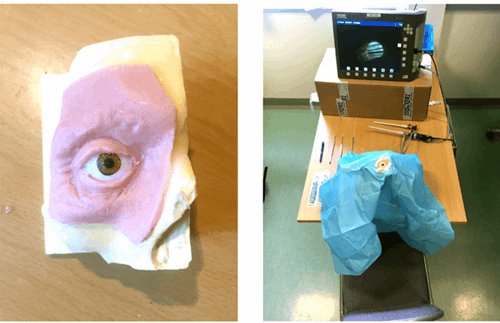