When can an aided cortical assessment help decision making in a child’s hearing journey? In this article, the author demonstrates the application using an enlightening case study approach.

A device, be it a conventional hearing aid or hearing implant, ideally, needs to provide the user with adequate access to speech quickly and be comfortable to use so the device can be worn daylong. Appropriate access to sound allows aural habilitation to begin and the advantages of early intervention to be realised. Verifying a device programme using subjective methods can be time consuming and beyond the capabilities of the client.

What is aided cortical assessment?

ACA involves presenting speech sounds at conversational levels to an aided client via free field and measuring the evoked cortical response. An example of an automated system used in clinics is the HEARLab® System by Frye.

ACA is conducted in a quiet room. The client sits alone or on a parent’s knee, one metre away from the system’s free field speaker. The client needs to comply with electrode placement on vertex, low forehead and one mastoid. The client needs to remain alert, still, quiet and wear one or both of their listening devices. Usually the young client can be quietly amused with soft toys or by watching a muted video.

The cortical auditory evoked potential equipment used by the author and her team stimulates using three speech tokens, /M/, /G/ and /T/, corresponding to frequency bands 200-500 HZ, 800-1600 HZ and 2000-8000 HZ, respectively. Testing using all three speech tokens will inform the audiologist about the client’s ability to hear the whole speech spectrum. Speech tokens can be presented at 55, 65 and 75 dB SPL corresponding with soft, normal and loud conversation level. A huge language input is necessary for a child to develop natural, spoken language so, ideally, they need sufficient access to sound to be able to benefit from incidental speech as well as speech directed at themselves. If a client has P1 responses to stimuli /M/, /G/ and /T/ at 55 dB SPL, the audiologist can assume that the client has adequate access to speech.

ACA, as well as informing the audiologist about the appropriatness of the provided programme, can also guide programme modifications e.g. in a MED-EL CI if the client has responses to /M/ and /G/ but not to /T/ then modifications can be attempted to the maximum comfort levels (MCL) of the corresponding frequency band of the token /T/, which are high frequencies located in the basal area of the cochlea (electrodes 9, 10, 11, 12). ACA using the /T/ stimulus can then be repeated to check for improved access to sound.

Both the morphology and the latency of cortical responses change over time [2]. P1 latency decreases quickly during infancy and childhood and slowly during adolescence. Morphology of the response changes from a single P1 response in childhood to a P1, N1, P2 response in adolescence. These changes are the result of refinement and maturation of the central auditory pathways brought about through hearing. Repeated ACA performed on paediatric CI and auditory brainstem implant (ABI) users provides information in terms of P1 latency, about maturation of the client’s auditory pathways (Figure 1). Appropriate access to sound leads to maturation of the auditory system. Persisting long latency not in accord with the expected latency for a client’s age may indicate, for example: limited use of or a faulty external device; inaccurate programming or, more seriously, the inadequacy of a hearing implant to provide sufficient hearing to promote maturation of the auditory system e.g. due to cochlea nerve deficiency (CND).

Although ACA is a quick and objective way to verify CI programmes where MCL has been set by auropalpebral reflex or electrically elicited stapedius reflex, ACA’s real strength lies in being able to assess the validity of programmes where evidence on which to base MCL and THR is unobtainable and where the user is unable to provide feedback in any subjective test. With widened CI candidacy criteria, more children with multiple disabilities and children with cochlea and or cochlea nerve anomalies are presenting for programming. Provision of an accurate programme for such children can be challenging and time consuming. Loudness discomfort and/or non auditory stimulation (NAS) are recognisable, but some clients may show no reaction to stimulation and the clinician may be lost as to where to set MCL. In such cases, the clinician can provide an approximate programme then check sound access using a cortical measure. According to these findings, programme modifications can be made and ACA repeated again. Global lowering or raising of MCL or MCL changes only in a certain areas of the array may be indicated. Using objective CAEP measures to guide programming decisions is likely to take less time and be more reliable than attempting subjective measures, such as implant threshold testing using visual reinforcement audiometry (VRA). Similarly, ACA can be done by one trained technician, whereas subjective measures with young, challenging clients usually involves two audiologists.

An ABI was recommended but refused by her family. A CI was placed to left side. At the first programming session subjective responses by VRA to single electrode stimulation were observed on all electrodes at 40 qu, a programme was configured and ACA performed. No P1 response was recorded to /G/ at 55 dB SPL. Further programme changes, widening of pulse duration allowing increase to MCL without causing NAS, were made, then ACA was repeated. Late latency, P1 responses to /G/ and /T/ at 55 dB SPL and to /M/ at 65 dB SPL were recorded confirming adequate access to sound from first day onwards (Figure 2)! 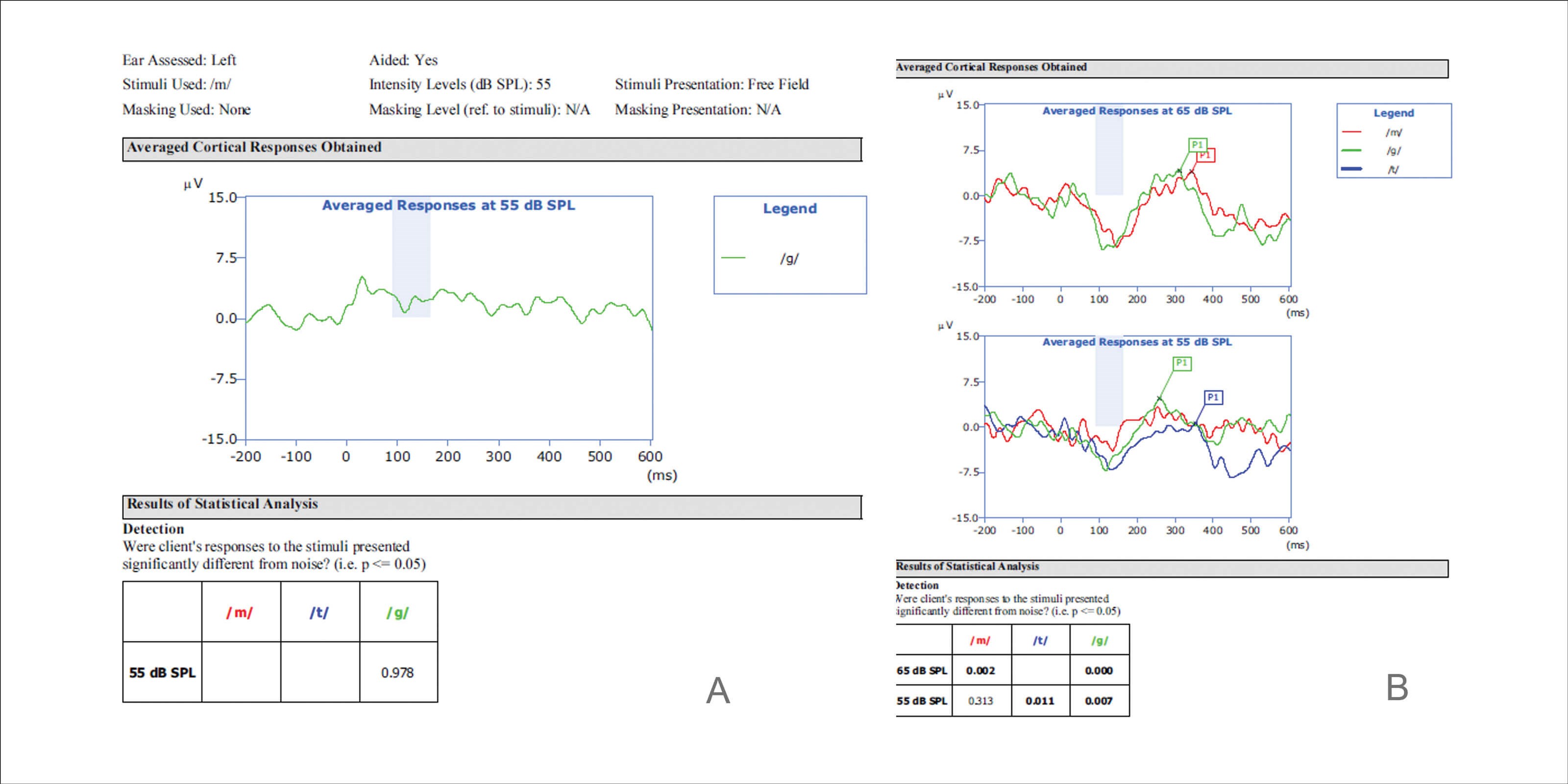 ACA can optimise choice of device type for each ear: hearing aid, cochlear implant or auditory brainstem implant. A bilateral or bimodal solution maybe indicated. ACA with hearing aids prior to implantation may confirm the need for a CI or may indicate continued use of hearing aids. Mehta et al report CAEP measures facilitate earlier decisions and are an additional measure for CI referrals [3]. Conducting ACA on each ear seperately with powerful hearing aids with good earmoulds prior to ABI surgery may aid the decision to try or not try a CI first.

If an ACA system is not available but a standard EP device capable of cortical recording (CAEP) is, an electrical CAEP can be recorded stimulating directly individual CI electrodes at equivalent MCL level via the clinical fitting software [4,5]. Responses as P1-N1-P2 can be evaluated similarly to ACA and, if indicated, the fitting MAP adjusted.

Clinical practice can be improved by adding ACA to a clinics battery of tests. Use of ACA can enhance programme verificatiıon, allow for monitoring of auditory maturation, provide information on which to base programme modifications and help to make accurate, timely programming of challenging clients possible.